Last week, we went to the lodge social for dinner and a lively game of bingo. One of the white elephants that was brought for the prizes was a pot of daffodils. Buddy was fascinated by these flowers and went over to the prize table several times to observe them and delight in their fragrance. “I want to win the daffodils, Mom. I want to give them to you.” 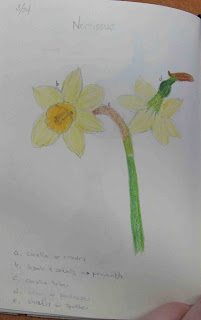 As you can guess, he didn’t win the flowers … an adult admired them as well. Fortunately, he took it in strides and no tears were shed. For the next few days, however, he continued to ask and plead with me to go to the ‘plant store’ and buy some ourselves. I couldn’t say no. When the munchkins finally had the opportunity to select the flowers, they opted for Narcissus instead. 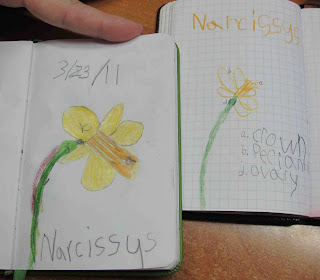 We spent several minutes with the loupe (or hand lens) while I read from the Handbook of Nature Study.  We then spent a little time illustrating a single bloom and labeling the flower parts as indicated in the book (Meili’s labels are on the reverse side of the paper).  Buddy was not feeling well when he did his – he had quite the fever and spent most of the day sleeping – I was actually surprised he did it at all.  It was his idea – I reckon – so he saw it through.  I’m so proud of them both!