As we expand upon the vision of our Roots & Shoots club, we have begun to incorporate more involvement from the other parents … something I am very excited about.  Upon request of the kids, one of the first themes we have begun to explore is Aerodynamics & Flight.

We began with simple kites last week and each parent brought an activity or snack to share.  I read aloud a brief history of kites and touched upon the prevalence of kites in Asian and Middle-Eastern cultures.  We then began construction. 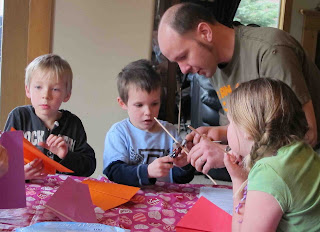 We had several simple kites to choose from but opted to begin with one made from a single sheet of 8 1/2″ x 11″ paper.  This style also required a small wooden dowel or straw for strength (you can see in the picture above the kids cutting the dowel to size) as well as holes cut in the wing tips for the string.  This wiki-page gives detailed instructions, How to Make a Fast Kite with One Sheet of Paper. 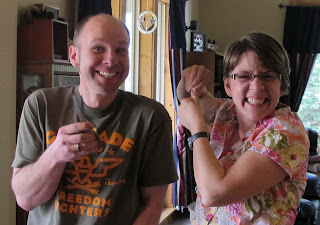 At one point, the hole punch got jammed with paper so I attempted to dislodge it and accidentally sliced the tip of my thumb with the scissors.  Dumb mistake.  Justin – our awesome homeschool dad – came to my rescue, applying pressure to stop the bleeding while my little buddy found the band-aids.  My blunder provided an impromptu lesson in first-aide! 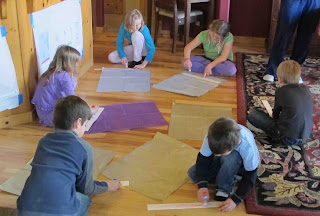 The second kite we made were Asian-inspired carp kites made from tissue paper (Koinobori). To make the koinobori, we simply folded a piece of tissue paper in half. Students drew the carp shape, making sure the fin was opposite of the fold. They then cut it out, opened it up, and drew the other half of the carp as symmetrical as possible. They were encouraged to color it with oil pastels.  Pipe cleaners was adhered along the mouth with tacky glue. Glue was also used to glue the rest of the fish together.  The mouth was kept open by bending the pipe cleaners. They then used a hole punch to punch a hole in the center of the mouth to attach the string. Upon completion of the kites … they kiddos were anxious to get outside and fly them.  Unfortunately, the weather didn’t cooperate and there was little wind. 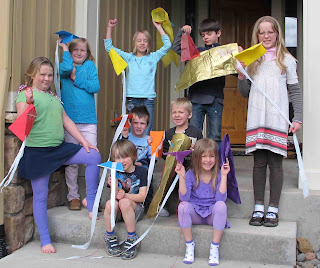 We had such a good time – we didn’t get a chance to make all the kites we had planned for.  We will thereby revisit kites again next week.  Our vision is to then explore ‘lighter than air’ (hot air balloons), airplanes and eventually rockets.   I can’t wait to share all that we have planned … the field trips and special guests.