A month or so ago, we observed a few mud dauber wasps in the vicinity of our garage.  As we watched them fly about our heads, we also came to realize there were several light brown colored blobs of mud plastered on the walls of the garage.  My husband, ever so diligent, wanted to spray them.  I pointed out, however, their ‘homes’ were encased in mud and it wasn’t clear how the chemical would penetrate the walls of their structure even if I was in agreement with his method (which I was not).  He thereby left the disposal of these potentially frightening, thin-waisted stingers to me.

What was I to do?  Google, of course!  Within a few moments I came across a short and sweet little video on eHow of an licensed exterminator (at least I can presume he was a professional) not only explaining how to easily remove the mud case from the walls of the garage but also providing a wealth of information about these tiny architects.

I thereby scraped the few structures we had observed … all but one crumbled into dirt, revealing the cells within which resided the young wasp larvae.  I immediately called the kids over and we marveled at the structure as well as the developing insects.  In one cell, we also observed a number of small, plumb spiders – an insect pantry of sorts.  🙂 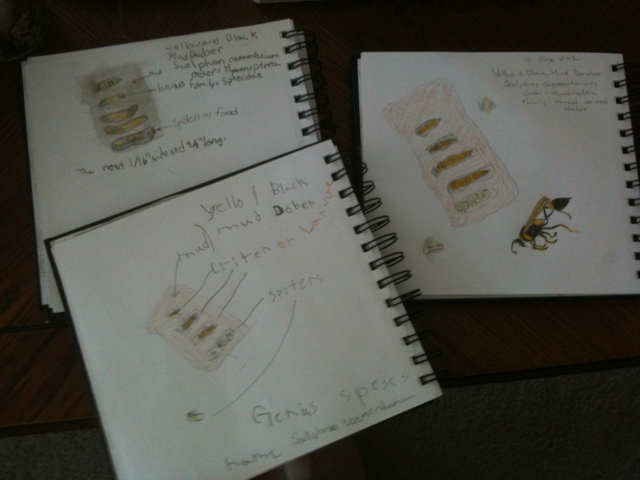 A few weeks later, I downloaded the Handbook of Nature Study June newsletter and discovered to my delight that one of the challenges focused upon yellow jackets or mud daubers.  How timely!   We hadn’t thought to journal our discovery earlier .. now we had the perfect inspiration.  We thereby pulled out our journals and sat down at the computer to look again at the photograph we had taken when we disposed of the nest earlier.
The kids were not keen on sketching the adult insect, “… too scary!” was their comment.  They thought my sketch was “freaky” enough.  I just love the labeling that #2 added to his sketch (his is shown prominently on top). He was confidant and took the initiative to label his without a single request from me.  It is impressive to me – and heartwarming too – that he used his own spelling.  He took the lead … and #1 followed his example.