Our beloved Sons of Norway Lodge in Central Oregon had an active youth group.  Our lodge here in Northern California does not.  This is one of the hardest things about moving – adjusting oneself to the changes and finding a new niche.  Not disheartened, over the past few months the kids and I have been working to establish a community of young families interested in learning about Scandinavia.  We started a Barnesklubb or youth group that meets one afternoon each month.  Our hope is that they will become members of the lodge – but ultimately, we just want to share our love of our heritage with others.

We thereby chose to take part in our local county fair – putting together a Youth Feature Booth to share with the public a little about our activities.  An added incentive was the premium offered per class – $100 for 1st, $80 for 2nd, $60 for 3rd, and ribbons for 4th and 5th.  As our new lodge is small and has no source of income (our former lodge owned their own building that they rented out for weddings, classes, etc.) – there is no funding for the club activities we desire to do.  I’ve had to pay for everything out of pocket.  Winning a premium would be awesome! 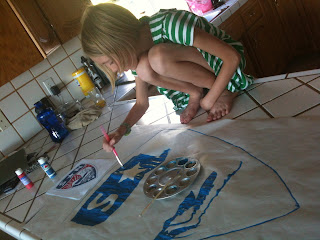 Sadly, the group here is so new … we didn’t have much help in constructing our booth. Those who have taken part in our activities were unable to help.  True to their Viking ancestry, my two didn’t let this deter them.  They said they would do it alone.  When Grandma was in town last month, we brainstormed ideas and they settled upon a Viking ship to represent our focus on our heritage.  The kids painted the mast, unique shields with the flags of Norway, Denmark, Sweden, and Finland for the ship, the Sons of Norway logo for the mast, and drew out a dragon hull onto cardboard.  I cut it out for them as it required the use of an Exacto-knife.  I then helped them to tape the cardboard pieces together with shipping tape.

When we set it up, one of the fair coordinators came up to us with some misgivings and concern, “You realize,” she said, “the feature booths are for youth groups?”   “Yes,” I replied. “This is a youth group.”  “Where are the kids?  The kids are supposed to put the booth together.”  “These are are the only two active members,” I replied.  “Oh!” she exclaimed in surprise and walked away.

With that, my husband cautioned us not to expect much.  “Don’t get your heart broken if you don’t win,” he said to us.  I assured him that winning was not our primary goal.  Most of all, we want others to simply have knowledge of us – perhaps to take part if they are so inclined.  I should have realized he was foretelling the future. 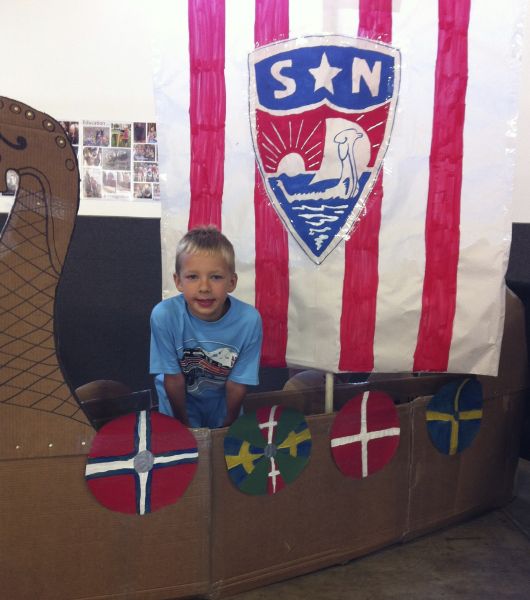 We then walked over to see our other entries – the kiddos had each entered a few “Arts and Crafts” as well.  They were again disappointed.  Those that know me personally, know that I do all I can to teach good sportsmanship and humbleness in my kiddos.  We have been taking part in the fair since the kids were toddlers.  We use it as a means of learning from others and to seek new inspiration for creative projects and handcrafts.  We look at individual entries carefully and evaluate what was done well.We attended the fair on opening day – eager to see the other exhibits as well as to see how we fared.

We allowed the anticipation to build by first walking through the commercial exhibits.  We then browsed all the exhibits and entries en route to where our booth was located near the rear of the building.  By the time we arrived at our booth, we knew there was only one other booth in our division – Junior Feature Booth.  While we were in the “Activity” class – the other was in the “Fair Theme” class.  Knowing therefore that we had no other competition – or perhaps only one other competitor if they judged the division as a whole rather than by class – we expected to do pretty well.  We were heartbroken to see that we didn’t receive any recognition whatsoever.

I honestly believe that I am NOT one of those moms that feels my children are entitled to accolades.  I don’t give them false hope or praise.  I am the first to admit when they don’t put in their best effort or when I can see areas of needed improvement.  The focus of this blog entry, however, was on the Barnesklubb Youth Feature Booth.  Regardless of how the kids fared in the Junior Still Exhibits “Arts & Crafts” division, the lack of any ribbon whatsoever for our Youth Feature Booth perplexed us.  If there were other entries with whom we could compare – we perhaps could have come up with some theories.

I inquired with a volunteer on hand who led us over to one of the judges – the same woman who had questioned us earlier about the lack of other youth.  As she spoke, she gave me the impression that someone else judged the booths but I can not be certain.  She stated that the judge had felt our booth didn’t have a clear message.  That we failed to utilize the 10′ x 10′ space effectively.  They don’t like people to walk into a booth and thereby the pictures on the back wall were too small.  There was no lighting.  “The judge thereby decided not to award it at all.”  Essentially we took this to mean we had been disqualified. 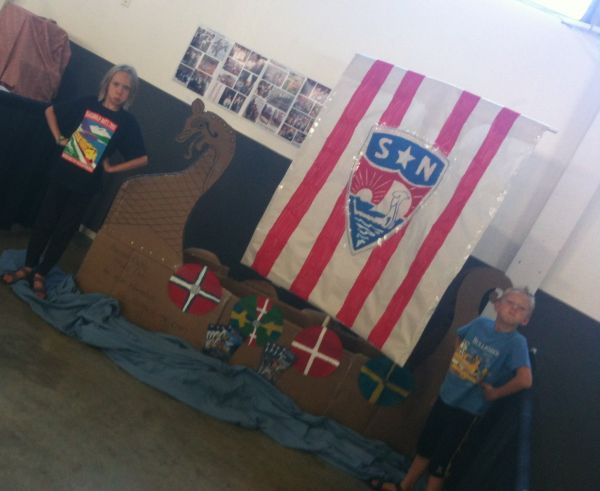 According to the County Fair Exhibitor Guidebook, Junior Feature Booths are judged using the American System of Judging and use the following score card:

So what does American System of Judging  mean?  I did a little online research and came upon the following clarification:

A rank-order scoring system which awards the top exhibitor 1st, another 2nd, 3rd, etc. based on a score is called the “American System” or the “Peer System.” There may also be special categories such as “Top of Class”, “Best of Show”, etc. While the American system uses standards and requirements, it primarily uses the idea of competition between exhibitors, pitting one competitor against another to establish the rankings. In the Olympics, there can be only one gold, silver, and bronze. That is the “American system” of awards.

In the “Danish System” sometimes called the “Group Method”, exhibitors are measured against standards, not ranked against other exhibitors.  In 4-H, and in many junior classes of events in state and county fairs, most judging involves the Danish system of judging. In this system, the judges do not judge one person’s work by comparing it to another’s. Instead, a judge determines whether the exhibitors meet or exceed standards. Often a score sheet, available from the county 4-H office, is used to help the judge group exhibitors consistently.

Wow!  So based upon this information, we should have been compared to other exhibits in the same class (there were none) or perhaps the same division (there was only 1 other).  The woman I spoke with this afternoon said,  “The judge thereby decided not to award it at all.”  She further added that she would give me the score sheet the judge used to score our booth when we picked it up at the end of the week.   Score sheet? Sounds to me like they were using the Danish System of Judging.

I am so frustrated.  If there were other booths that had better met the qualifications or received a higher score, I could understand why we had not fared well.  But this was not the case.  There was no competition.   I thereby do not understand.  How then, do I explain the results to the kids??