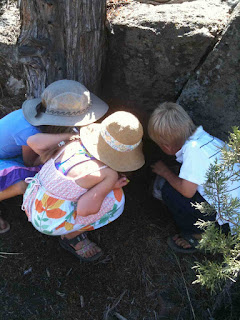 A few weeks ago, the kiddos and I invited a couple of friends to join us on a letterbox outing at a local park. There were originally three boxes there – two of which we had scouted out in the past though we were successful only in finding one. A year has past since that first outing and I figured it was a good time to complete the quest and find the third as well as the one that eluded us previously. Unfortunately, when I re-printed the clues I discovered that the 1st box (the one we had found on our first quest) had since been muggled. My goal was to introduce our friends to letterboxing so I really hoped we’d be successful with the 2nd and 3rd boxes.

As the 3rd box begins in the parking lot, we opted to start our quest with that one. We ambled up and over the rocky cliff side along the river. We actually went a little too far and spent some time poking around at the base of the wrong tree. We had almost given up and were headed back when my girlfriend suggested another tree along the path. I moved a few pine needles and leaf litter and there it was!

The kiddos hurried over to open the treasure and revealed not one stamp but two! Mushy the Troll (shown above), a hitchhiking letterbox stamp, was concealed within the original box. What a find! Based on his accompanying logbook, I believe he originated in Ohio. We look forward to re-hiding him when we go on to California in a few weeks. We were all getting a little hot (it was nearly 90 degrees) so we opted to save the 2nd box for another time.

With our Roots & Shoots club, we have done several letterbox quests – most have been successful but a few have not. Each time, we’ve introduced new families to letterboxing and many have pursued other quests on their own. Despite our occasional failure to locate the box, however, the kids always express an interest in hiding our own box. Today, we finally did so. 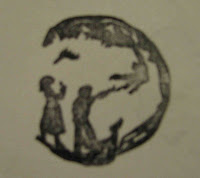 I designed the stamp to resemble the official Roots & Shoots logo but rather than have a single stamp, I designed two stamps that form a single image. We put one stamp in each of two boxes and provided clues to each box location (both of which are located in the meadow of our subdivision). The kids enjoyed walking out to the meadow. We were surprised by the welcome of hundreds of tiny little green and brown frogs. Most of the kids spent their time catching the little amphibians rather than looking for the ideal place to conceal the letterbox.

We look forward to seeing how many people visit our boxes. In the future – it will be fun to create a graph of the locations from which those who sign the logbook are from. We assume that most will be local but it’s exciting to think tourists may also search for our box. Perhaps even other Roots & Shoots members?!