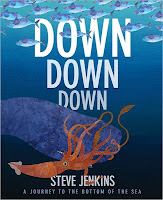 Sunday afternoon, I picked up a book that had caught my eye earlier in the week and called the kids over to the coach. They had been arguing with one another and I was hoping to distract them and get them settled down into a quiet activity. Had I planned what I am about to describe, I know it would not have worked out quite so well.

I introduced the book and as usual asked the kids to tell me what they expected the book to be about based on the cover illustration and the title, Down Down Down by Steve Jenkins. They guessed immediately that it was about going down in the ocean and the animals we might see there.

I didn’t finish 3 pages before Sweetie announced, “Hey! These pictures are pieces of paper they cut and put together like a puzzle.”

“Yes. This type of art is called paper piecing or cut & torn paper collage. When we are finished reading we can give it a try if you want,” I replied.

Boy did that excite them. With every page I turned, they were more intrigued by the artistry. “I want to try to make that one!” “Oh! Look at the whale!” 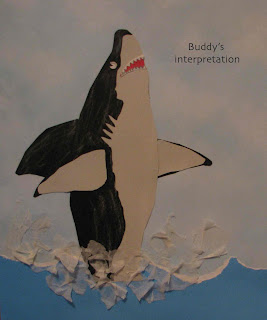 When we finished, we gathered together the colored papers that we had on hand. I explained that we didn’t have all the same colors or patterns that they had used in the book. I then asked each to select one animal that they most wanted to make. Buddy immediately chose the Great White Shark and Sweetie chose the Oarfish. 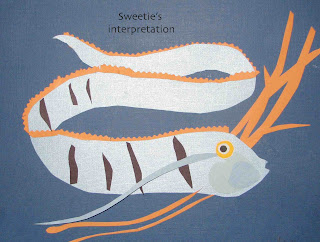 I traced an outline for the basic shape of the shark and the fins for Buddy. They then got underway cutting and pasting. I provided some additional help for Buddy with the teeth, the eye, and cutting around the gills. Sweetie asked occasionally how I would suggest making the more detailed parts – I demonstrated my interpretation and she took it from there. 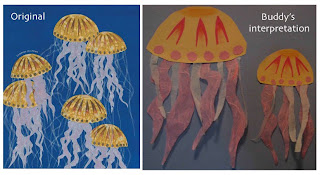 As we were busy working, they became so engrossed in the activity that they have decided they want to make an entire book of their own. We used chalk pastels in a few places for added texture. Take a look for yourself and let us know what you think of our work. 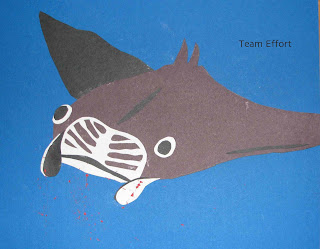 Update:  In 2012, Sweetie’s Oarfish was selected as honorable mention by the California Coastal Commission as part of their annual Art and Poetry Contest.

3 comments on “Down Down Down ~ Children’s Books & Art”