As most of you know, I am passionate about sharing my love of science with others and truly enjoy coordinating activities for my children and their friends. Doing so actually helps me ‘charge my batteries’ – though I must admit I do find myself fatigued when the activities come to a close.

A few months ago, a homeschooling mom and friend of mine asked me to teach a science class to her twin daughters and a number of their friends. All of the girls in this class and their families are devote Christians while I am very secular. We talked over our respective visions for the course and as I was planning to begin with a unit on Geology, parents wanted to know how evolution would be addressed.

I assured them that I would not teach continental drift. I would not introduce lessons on evolution or even elude to timelines. My focus for the class was simple… What causes an earthquake? How do volcanoes erupt? What kind of rock is this? 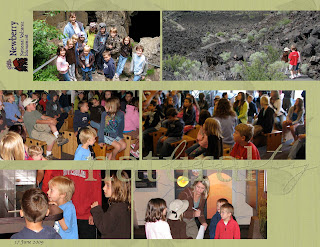 As our 4 week unit on geology came to a close, I extended an invitation to the girls and their families to join my Roots & Shoots club for a field trip to Newberry National Volcanic Monument. In short, I planned one field trip for two distinct age groups.

Upon arrival, I was delighted to discover that many families chose to bring siblings and friends. They had all asked in advance and I assured them, “The more, the merrier.” In the end, there were nearly 30 kids! My efforts were certainly not wasted this time. 😀

Unfortunately, the staff was unprepared – despite the fact that I had contacted them nearly 2 months in advance and had spoken with the education coordinator at least 3x by telephone to coordinate details. Thus, as they rapidly vacuumed the floor to open the visitor center and did a few things to prepare for us… I took my group on an impromptu nature walk on the grounds. I talked about the flora and fauna of the area – discussing many of the medicinal values of our native shrubs. Everyone was delighted and remarked how much they enjoyed the walk.

We then moved into the visitor center and seated ourselves comfortably for a brief talk by the staff coordinator and a volunteer followed by a short video on lava and lava tubes. I was pleasantly surprised to discover that Jim, our Naturalist Team Leader at the museum, was our volunteer. His daughter homeschools and he has always been very accepting of the kiddos and I have become more involved in leading nature walks.

Prior to the video, Jim shared that the cinder cone (Lava Butte) at Lava Lands erupted 7,000 years ago and covered over nine square miles with lava. To help the kids visualize how long ago this was, he talked very briefly about the geologic timescale. As he did so, one mom turned around to me with a look of dismay and astonishment. I immediately felt awkward and wished I had given him a ‘heads-up’.

After the movie, the kids were divided into two groups: youngers and olders. The youngers started with a guided walk along the lava flow with Jim while the olders remained in the visitor center for a scavenger hunt to find information on the placards and displays. I went with the younger group – as to best keep an eye on my little guy. We enjoyed our walk (though we didn’t go to the top of the butte) and we all learned a little something about the geology and flora.

When we returned to the patio, the olders had finished their scavenger hunt and were heading out on their walk as well. One mom delayed briefly to check on her daughter whom had stayed with me while mom and brother went with the olders. She thereby began the walk with Jim though the other ‘olders’ had gone ahead. Apparently, one of the other moms felt compelled to come back to Jim and say something in the likes of, “We’ve decided to go on ahead without you. We didn’t care for what you said about the timeline and the history of the earth. We’re Christians.”

Jim’s reply was, “So am I.” He didn’t get a chance to explain that his daughter homeschools as well… “Perhaps you know her?” He could have added. The mom had turned to catch up with the others in her group.

Jim thereafter said, “This is why there are problems in the Middle East.” Though I wasn’t there to hear him – it was relayed back to me by the mom who had stayed with him… his comment really touched me. As we drove to Taekwondo a few hours later, I inquired with each of my kiddos about what part of the day had they enjoyed the most. (The cave!) What was one thing that they learned or that stood out to them?

As we talked they asked me the same questions. I described the above scenario to them as best I could and explained that I had been thinking about it all afternoon. I told them I felt sad for the other moms because they might have missed out on something interesting. Would these moms be able to identify the wildflowers that were growing in the lava? (Penstiman) Or understand why the northside of the butte was vibrant with trees and shrubs while the southside was barren?

I stated that we are entitled to our opinions but that does not preclude us from learning from others who may think differently. I was impressed by Sweetie’s level of understanding. She even said, “We don’t all have to agree. That is what makes it more interesting. When we like different things.”

I understand that many people choose to homeschool for religious reasons. I chose this path for a different reason. To allow my children to develop the conviction in themselves and their beliefs to listen and learn from others… knowing others are opposed. To be courageous and not bend or conform to how others believe you should.

Administrator Note:
It is not my intention to put anyone down by describing this experience. As I wasn’t there – I can’t be certain of what exactly was said. I don’t know the reasons the olders chose to go on ahead. I just wanted to share because it provided me with a teachable moment for my children.

5 comments on “Being Open-minded and Accepting of Others”