MeiLi has become quite the little swimmer. She delights in sitting on the deck during my swim class and watching us ‘masters’ work on our stroke. She listens to the coach and puts to practice his advice whenever she herself goes swimming.  She has talked about joining the youth swim team but has wisely opted to wait until summer (at which time she will likely have acheived her black belt in Taekwondo rather than try to do both simultaneously). 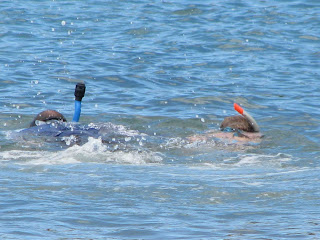 Hawai’i brought new swimming opportunities … the chance to observe the fish and coral reef invertebrates previously only accessible to her by book, video or in an aquarium.  Now she could see them in the wild, “…in real life!”  When asked what she was most looking forward to seeing, she replied, “Humuhumunukunukuapua’a!” 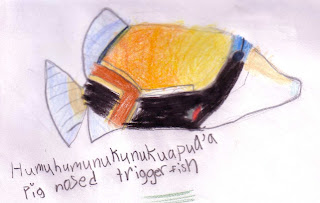 Fortunately, the state fish of Hawai’i was not in the least bit shy and made his/her presence known each time MeiLi donned her goggles.  In the evening, she worked on a sketch of her favorite tropical resident and created a list of facts about the colorful trigger fish.