Recently I wrote a post on my personal blog titled Seasons Change. It centered around the fact that my kiddos are growing up. That as they do so, new opportunities become accessible. When I wrote it, I was focusing on their joy of riding bikes. How their new skill would enable me to renew my love of running as they would be able to accompany me and I would no longer be encumbered by the jogging stroller. Shortly after I posted however, a received a phone call that again made me realize that as one door closes, another door opens. We only need to be willing to recognize the opportunity. To be ready for new adventures.

As many of you know, I consider service learning to be a major component of our homeschooling. The past few years we have volunteered at the local natural history museum in a a variety of venues. Initially, we were Living History volunteers, portraying a homestead family in the high desert in 1880. We served in this role together for two years – but as Buddy grew, so did his adventurous spirit and he wasn’t too fond of staying “on-site”. Sweetie and I continued the following year but Buddy was disappointed that he was left out and Sweetie felt bad that he couldn’t share in the joy. We thereby moved to the Naturalist Team. 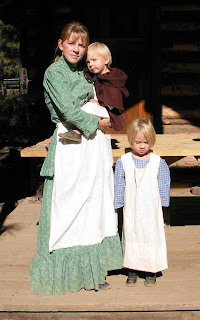 In 2008, the museum had a special exhibit entitled The Healing Power of Plants. A team of volunteers was developed to lead a nature walk each day, introducing visitors to the natural flora and fauna of the high desert, highlighting their medicinal attributes. We were welcomed by the team lead (his daughter also homeschools) and we began to lead walks every Tuesday morning.

This past year, as interest increased, there were more then enough volunteers on the naturalist team to cover each day of the week and we thereby served as substitutes, covering the schedule when another team member was ill or had an obligation that prevented him/her from volunteering. This worked perfectly for us as each time we went, it was like a new adventure. 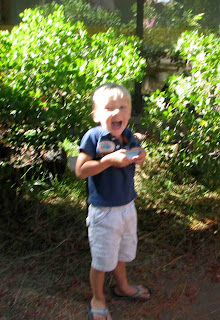 Prior to our talks, I would always spend a few minutes reviewing what was expected in regards to their behavior as well as pointing out what makes a good presentation (eye contact, projecting your voice, etc.). Recently, we had even begun to discuss famous people who were good speakers (Julius Caesar, Martin Luther King Jr., etc.). They were both becoming very comfortable and enjoyed sharing their knowledge of nature with the guests.

We led about 5 walks for adults all summer (in the beginning of summer, we led walks specifically for small children and did the walks right after storytime). Each time, the kids shared in presenting the information (see a video of their presentations here) and the visitors remarked on how well they did. The adults would interact with the kids, asking them questions about the plants. They’d share stories of their own experiences with nature. Not once was it expressed that the kids were a distraction. To me – it seemed as though their presence helped to enrich the walks… actually encouraging the adults to interact a little more with us (the guides) as opposed to blindly listening to me ramble off facts. 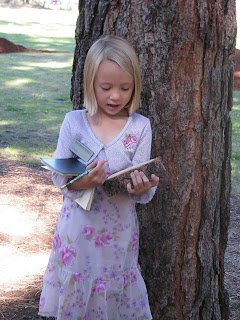 A few days after our last walk (the season was coming to a close and I knew we would not likely be called to substitute again this year), I received a phone call from the volunteer coordinator. She began to tell me how visitors had reported how wonderful my walk this past week was… how informative and educational it was for them. As she talked, I knew immediately where she was headed. “Though the walk was wonderful, it was at times, difficult to hear because of the children. We have to ask that you no longer bring the children to the museum when you come to volunteer.” My heart sunk. I knew it.

I thereby proceeded to explain that this wouldn’t be possible as we were a package deal. She suggested I volunteer when the children are in school. I pointed out that we homeschool and that this was a key component in our curriculum. “If I am not able to bring my children, I frankly, don’t have an incentive to continue to volunteer at the museum.” She expressed her disappointment in my decision and her hope that I might change my mind.

I honestly don’t think my children have been disruptive. Between their ‘talks’ – they generally run ahead and observe the squirrels and chipmunks, poke around for insects, and explore the outdoor exhibits independently (tee pee, otter habitat, etc.) Occasionally, Buddy does make train noises, “Choo chooooo!” but he is always a fair distance ahead of us. He hasn’t been any more talkative than the adults chattering amongst themselves. I am accustomed to a class of 30+ students socializing. I’ve always waited for everyone’s attention before I begin to talk.

Granted, I understand where ‘the museum’ is coming from. What I don’t understand is why they couldn’t give us the opportunity to make a change. Perhaps, we could have come in and the volunteer coordinator could have explained what the visitor had expressed directly to the children and allow them an opportunity to make a change. Treat us – the children specifically – as you would any other volunteer… with respect.

In my 5 years volunteering at the museum, I have had many opportunities to observe how they treat their staff (laying off a number of employees stating it was for financial reasons and a few months later replacing them) and volunteers. There are over 200 volunteers and it is obvious that they feel we are expendable.

Surprisingly, I wasn’t as disappointed that this door closed as I would have anticipated. Perhaps because it was due to my previous realization that seasons change. We are open to new opportunities now and look forward to what might be just around the corner.