I am ashamed to admit that we haven’t really been doing formal nature study lessons for longer than I can remember. My kiddos can identify nearly all the native plants in our area and Sweetie can list a few medicinal / food uses for several – but otherwise, our knowledge is rather superficial. Though I haven’t been participating, I have been lurking and reading the posts regularly at Barb’s Handbook of Nature Study. I love what she does and I always come away feeling so inspired… I keep telling myself, “I need to do more!”

We recently spent a few days in Yosemite National Park. One of the trees that fascinated me while we were there was the black oak, Quercus kelloggii. When I discovered upon our return that one of Barb’s autumn series challenges focused on oaks and acorns… I vowed to jump back in to the challenges. So without further ado…

Quercus kelloggii: black oak. A deciduous tree typically under 75 feet tall with smooth grey young bark that becomes deeply furrowed and dark brown to black as it matures. Leaves: blade 3-7 inches long, deeply lobed with soft bristles adorning the lobe ends. Acorns: mature in 2 years with a rounded tip (ignoring the little spine on the end). The acorn cap is generally as deep as it is wide, often covering most of the acorn shell, with scales and little to no hair. 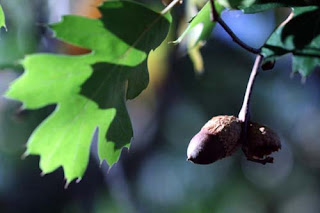 Black acorns were a substantial part of the diet of California Indian people. When stored properly, acorns will keep indefinitely, so an effective storage house was developed. The granaries were raised above the ground on a stump or large rock, and consisted of a nest-like container made from grapevines and buckbrush built between four upright poles. The cavity was lined with wormwood and then filled with acorns. The entire granary was then shingled with conifer boughs and capped at the top with layers of more boughs, cedar bark, and after the coming of non-Indians, canvas. 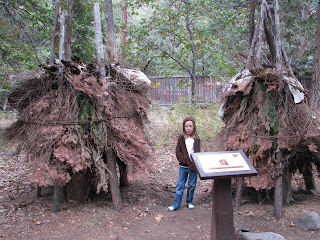 Acorn granaries were common until the turn of the century, but their use had died out by the 1920s. Today, Native American people store acorns in gunny sacks or boxes which are kept in their homes, garages or outbuildings.

One of the most important plant foods was acorn mush. Black oak acorns were preferred over other oaks by Miwok, Mono Lake Paiute and Western Mono peoples. Black oaks don’t consistenly produce good crops of acorns; in good years, each family might collect and store about 2000 pounds of acorn for use over the next several years.

Acorns were gathered in autumn, dried, and stored until needed. Before they were eaten, the nuts were cracked, the peanut-like skin removed, and they were pounded to a fine flour. To remove bitter tannins, the flour was leached, placed carefully in a sand basin, and water poured over it for several hours. The leached flour was then mixed with water in a watertight cooking basket. Special, red-hot stones were placed in the basket, stirred constantly, and after about 20 minutes, the acorn mush boiled, thickened, and was fully cooked.