We had a great turnout for our first heritage camp which we advertised by word-of-mouth only. There are 15 young participants whose ages ranged from 3 to 8 years. In addition, one adult lodge member has volunteered to help each day so that she can learn more about Scandinavia herself.

The first day was a glorious mess. We began by watching Erling demonstrate Scandinavian Wood Carving – a delight to watch by both adults and children alike. The Scandinavian flat-plane style of woodcarving is a style of figure carving. The figures are carved in large flat planes, created primarily using a carving knife. Tool marks are left in the carving and very little (if any) rounding or sanding is done.

Erling was born in Norway and he even spoke a little Norwegian for us. It was a blessing to have him share his craft and we were all very thankful. 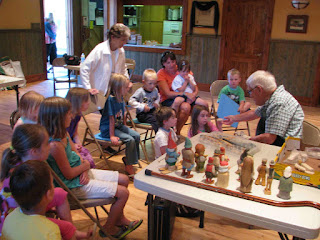 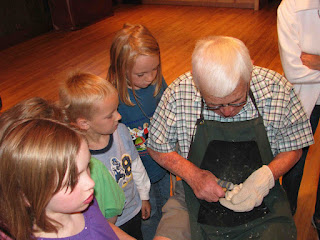 After watching attentively for nearly 20 minutes, the kids returned to the tables where they were given a piece of Ivory soap and a knife (butter knives for the youngest). I moved amongst them quickly to sketch an outline of a butterfly, a fish or whatever the children requested. They had a great time carving – but we were all surprised with how easy it was to carve. As a result, many of the kids had trouble carving their desired shape as the soap would break with the slightest pressure. While a few were intent on taking their time – others were content to create was looked to me like a pile of feta cheese. A las, it was exposure and they enjoyed themselves. 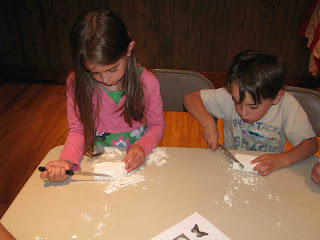 Thereafter, I read aloud the story The Three Billy Goats Gruff and talked briefly about the prevalence of trolls in Scandinavian literature. I did my best to change my voice for the characters – Erling even got into it a bit and spoke the words of the biggest billy goat. I loved having him there. The kids enjoyed the story – a young girl shared that at her school they had performed the play and she cast as the youngest billy goat. Sweet! 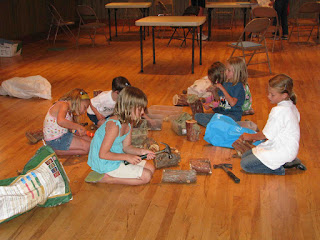 I then described to the kids how they could fashion their own troll using natural materials that I had collected. As before, some kids spent a lot of time to assure their trolls were as ugly and fierce as could be, while others weren’t so interested. It is always a challenge for me to think of activities that will appeal to a broad range of interests, abilities and ages. This has always been one of the most enjoyable components of teaching. 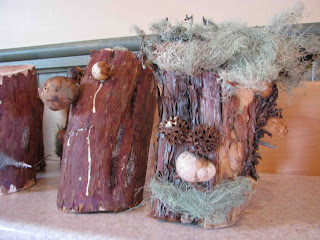 To conclude the afternoon, the kids took turns baking bread on a stick. I believe, if asked, the kids will unanimously agree that this was their favorite activity. They enjoyed it so much that most had the opportunity to make two – despite the fact that it took a little while to bake thoroughly. 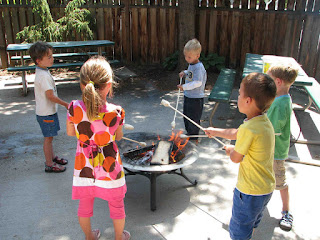 Bread on a Stick

Make your own dough or thaw some frozen bread dough if you prefer. Pull off a small handful or cut off some strips and roll into elongated segments 10-12 inches long. Cut a green stick, fairly stout; wrap the bread in a corkscrew fashion around one end, pinching the dough against the stick tightly so it’ll stay in place. Cook over coals in your fire pit. Cook slowly and evenly so the bread doesn’t burn and gets cooked thoroughly. You may brush with butter and garlic if desired.