I  have always enjoyed classic literature – especially historical fiction. However, as a child I didn’t have the opportunity to study Shakespeare. The school counselors – in their infinite wisdom – hadn’t set me on the college tract. I thereby listened in envy to my peers talk about the Shakespeare play they were learning about in Honors English.

When I began homeschooling, I knew that I wanted to make Shakespeare accessible to my children. I wanted them to be familiar with his works – regardless of what they chose to do in later life.

As I began to sprinkle Shakespeare into our studies, was a little apprehensive. I had to admit I didn’t know much about this man of many words, but for their sake I was determined to figure it out. We have tried a number of activities and strategies over the years. Essentially, building a middle school Shakespeare unit takes just five steps.

Admin Note: This photo is from the Oregon Shakespeare Festival’s “Much Ado About Nothing”. We will be seeing this play next month. 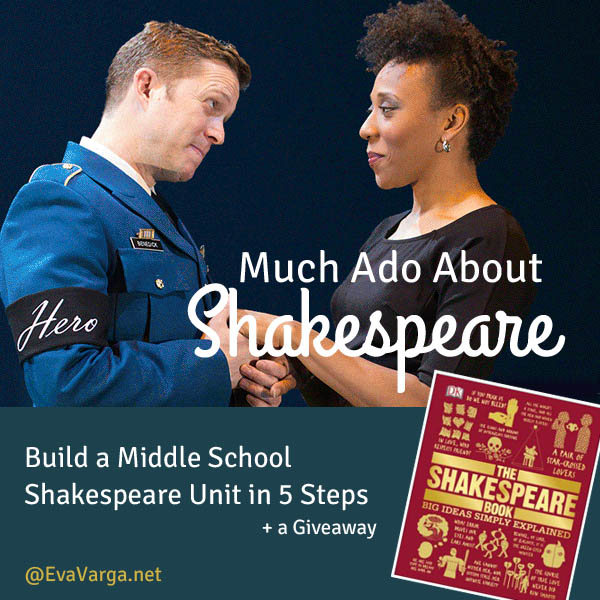 First, take a few minutes to familiarize yourself with the plot and story line. You can then freely enjoy the details without having to keep track of who is who. One of our newest additions to our library is The Shakespeare Book (Big Ideas Simply Explained)

.  {Many thanks to DK Publishing for providing the book to us for review. Please see my full Disclosure Policy for more details.}

What a valuable resource! This easy to use but very comprehensive book offers background on the characters, a timeline of events throughout the performance, themes, and plot summary, along with an overview of the legacy of each show.

There is also a nice biography of Shakespeare’s life in the beginning of the book and a timeline of each play written during the various phases of his career: when he was a freelance writer, as a shareholder in Lord’s Chamberlain’s theater company, and when his company was given a royal patent by by King James. Throughout the book, you really get to know Shakespeare as well as his plays. I know we will be referencing this book for many years to come.

Enter the giveaway below for a chance to win a copy of this book for yourself.

If you haven’t studied Shakespeare in the past, it is a good idea to begin with a biography. There are many to choose from – for all levels of readers.

A few that we have enjoyed in the past are:

Biographies by Diane Stanley are sooo wonderful they transport you; Bard of Avon: The Story of William Shakespeare

is no exception. The information is concise and clear yet is not watered down. This is someone that really understands writing books for children that adults can enjoy using as teachers or parents.  The text provides a great picture of who Shakespeare was and how the political and popular culture of his day reacted to his plays.

The “Who Was” series of books are wonderful. They are very informative and include a few illustrations which make learning about historical characters, scientists, writers, etc. fun for kids. Who Was William Shakespeare?

even includes a great vocabulary list, which I appreciated for our homeschool lessons.  Mannis creates many interesting asides in this short book, including words and phrases that were coined by the Bard, an explanation of blank verse, what school was like, the politics of the time, big city London, and how the Globe Theatre came about.

To introduce the basics of the plot, I begin by reading aloud from Tales from Shakespeare by Charles and Mary Lamb or Shakespeare’s Stories for Young Readers

Copywork is the practice of copying someone else’s writing in your own hand. We keep a notebook specifically for copying noteworthy poems, prose, and quotes. When we are studying Shakespeare, we select lines of personal interest. I also utilize these same excerpts for dictation.

We know that Shakespeare wrote drama to be performed in a theater not “literature” to be analyzed during language arts lessons. So reading his plays doesn’t achieve the same effect as watching a performance.

Many of the bard’s plays have also been adapted for film. This is a great way to prepare children for a live production – allowing them to see the full story as it unfolds on the television screen.

TIP :: Violence, profanity, and even nudity are all issues in many Shakespeare plays. Be sure to preview the movies yourself to decide if it is appropriate – and enjoyable – for your family.

Film adaptations we have enjoyed include:

The play we study in our homeschool is based on what will be performed locally – this year, we will see Much Ado About Nothing as well as Antony & Cleopatra – both are family productions (reduced price) at Oregon Shakespeare Festival. High schools, local theaters, and area acting companies are all likely places to find the occasional Shakespeare play. Ask around and see if there are groups you don’t know about yet.

Here are few highly esteemed venues in California and Oregon:

TIP :: You might inquire about volunteering as ushers in exchange for tickets. This is a great way to attend theater if the ticket price is not in your budget.

Scripts allow actors the opportunity to interpret their characters and reflect on different facets of humanity as they do so. Shakespeare’s plays and themes are complex, as life and people are. I absolutely love to watch multiple versions of a play and see how differences of inflection, of setting, and of context put completely different spins on the lines. This is the beauty of Shakespeare.

One of my favorite productions was Romeo & Juliet performed at the Oregon Shakespeare Festival several years ago.  During the preface, the director stated that because Romeo & Juliet was a play of contrasts, he chose to highlight the contrasts.  The most evident way he accomplished this was in his choice of costuming.  The  older generation – the parents and their employed – wore Elizabethan costumes whereas the young generation – the young lovers and their friends – wore modern day apparel including school team uniforms.  He further emphasized the contrasts with their speech – taking liberty with the prose originally penned by Shakespeare for the youth.

A few years later we enjoyed another OSF production of Romeo & Juliet. This time, it was set in Northern California in the mid-17th century – a vibrant and conflicted time in our history.  Romeo and Juliet – the son and daughter of two landed families (one Mexican & the other Spanish) locked in an old feud. Spanish was woven into the tapestry of the Victorian English much to my delight!

Though Shakespeare wrote to be performed, there is still great value in reading his plays with their beautiful use of English. However, there’s more than one way to read a text.

A great way to read Shakespeare is to give each student a copy and play an audiobook version while you all follow along. Hearing someone who knows how the lines flow read them aloud helps immensely with comprehension.

You can actually bring the theater home by acting out Shakespearean plays in your living room. Dress up and be actors, or use puppets instead.

Although it would be valuable, you don’t have to have costuming and rehearsals in order to give your children the chance to act out Shakespeare. Here are some other low-key, low-commitment ways to add performance to your homeschool:

Much Ado About Nothing

Shakespeare’s Much Ado About Nothing is a fun comedy about two couples—one in a “merry war” of words. It is one of two plays we will be seeing performed live this year. Below you will find a variety of free resources to help you put together a unit study on this delightful comedy.

Much Ado Quotes ~ With this worksheet, your teen will translate Shakespeare’s words into modern language, match up characters with their descriptions, and assign quotes from the play to who said them.

Call me Shakespeare ~ Review the hijinks of one of Shakespeare’s most famous comedies with song (accompanying worksheet on characterization is included).

Jimmie Lanley has a great collection of Hands-on Shakespeare activities on HubPages.

22 comments on “Much Ado About Shakespeare +Giveaway”