When we visited Maui in 2008, we took part in a Volunteers on Vacation weed pull through the Pacific Whale Foundation.  The kids and I had such a good time and enjoyed learning a little more about the native flora and fauna of the islands. 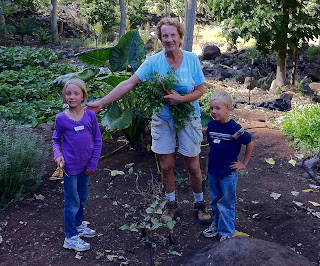 When we returned to Maui earlier this month, the kids were given the Maui Revealed book and were asked to make a list of all the things they wanted to do or see while we were there.  On the top of their list was the weed pull.  Rather than pull weeds on the beach however, as we did in 2008, we were able to take partner with Maui Cultural Lands to take part in the restoration efforts in the Honokowai Valley in North Maui.

“People who help the land and the culture,
who give unselfishly for the sake of the land,
they are the heroes, the real warriors.”
~Ed Lindsey, Project Director

From the Ka’anapali Coastline, Honokowai Valley is nothing more than a slim pleat in the West Maui Mountains. A simple stripe of green. Up close, it is overrun with invasive plants, like the haole koa, Chinaberry, and Java plum trees, that grow in mono-species thickets. One of the few Hawaii natives left here, kukui (candlenut) grow straight and narrow.  To get here, you have to drive to West Maui beyond the pineapple and sugar cane fields, beyond the ABC stores and vacation resorts along the coastline. You follow a dusty cane haul road up. You bounce along coffee fields and through invasive forests and padlocked gates. 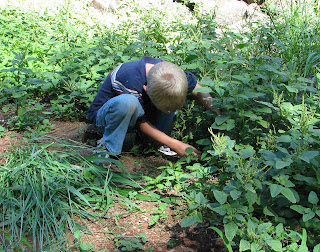 Today, the land is cared for by a stalwart team of volunteers who form a community project called Maui Cultural Lands. The team embraces a big idea: To restore Honokowai Valley to a state of balance. To remove the invasives so the natives can grow. To clear the ancient rock walls that once made up house sites. To repair the taro patches. To return the place to such a state that the estimated 600 or so Hawaiian families who once lived between these slices of rock cliff walls might actually recognize the place.  One hundred years ago, this was a working village—in fact, the “breadbasket” for the Ka’anapali region. Here, ancient Hawaiians grew taro, sweet potato and squash in the rock terraces they built. They crafted fishhooks, lines and lures; poi pounders, kukui lamps and anchors. The valley gave them everything they had, everything they needed. 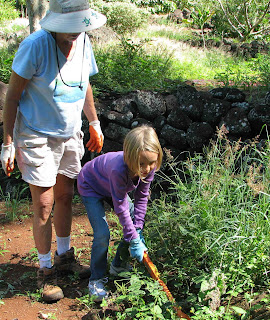 We joined the volunteer team on the Saturday before we departed for home.  Close to 20 of us volunteers piled in the back of 4WD pickup trucks, the act itself reminding me of day laborers hired to work the orchards and fields of southern California.  The day’s group consisted Puanani, her son Joe, several regulars: including Phyllis, Andy, David, Ipo, and Sylvia who will soon celebrate her 92nd birthday, two couples from Northern California and Melanie, a young woman from San Francisco and us.  It was a ragtag collection of ages, sexes, cultures and vocations coming together with a common purpose: to serve. 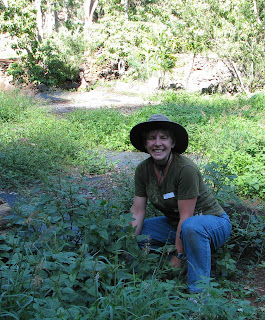 When we first arrived at our work site in the valley, Puanani gathered us all in a circle in the shadow of a towering stony cliff that framed one side of the valley. We joined hands and she welcomed us. We went around the ring introducing ourselves and sharing where we were from. Then, Puanani said, “These walls bear witness to all that has happened,” and she began to lead us in a chant in native Hawaiian. 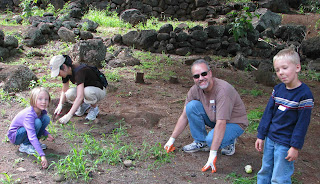 Maui Cultural Lands, Inc (MCL) is a Maui-based grassroots land trust organization whose mission is to stabilize, protect, and restore Hawaiian cultural resources.  MCL was established as a non-profit organization in February of 2002 and is one of only a few land trust organizations on Maui targeting Hawaiian cultural lands along the coast and inland areas.  Their primary goal is to reforest Honokowai Valley and the Kaanapali area with native and endemic Hawaiian plant species. For more information about the work in the Honokowai Valley, follow these links: