I recently shared a short fan fiction piece my daughter wrote and not surprisingly, her grandmothers were not familiar with the genre. The writing of fan fiction has become increasingly popular in recent years, and the vast majority of the writers and readers in this genre of fiction are teenagers.

What is Fan Fiction?

One of the fastest-growing literary genres is fan fiction, a term for stories about characters or settings written by fans of the original work, rather than by the original creator.

Writing fan fiction involves the creation of stories and books around already existing characters from a previously published work of literature or other art form (television, movies, etc.). This type of story cannot be published for profit as the characters belong to the original author.

Writers of fan fiction are technologically savvy, having grown up in the internet age. They have thereby discovered ways in which to share their work with others – not for profit – but to develop a fan base and to get feedback on their writing. 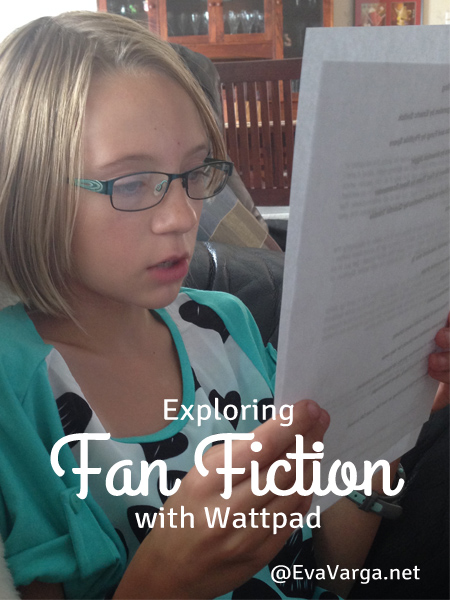 Wattpad is a place to discover and share stories: a social platform that connects people through words. With Wattpad, anyone can read or write on any device: phone, tablet, or computer.

When my daughter first approached me to ask about downloading “Wattpad”, I was skeptical. “You already have an e-book reader app, Sweetheart.”

“Yes, but this one has more than classic books, Mom. With Wattpad, you can share your own stories and read the stories that other kids write. My friend K told me about it and she says there are a lot of great fan fiction stories.”

My daughter is not a reluctant writer. She has always enjoyed the craft and completes assignments without complaint. Wattpad, however, has inspired her to write more frequently.

In the past, she seemed to only want to write stories about cats – akin to the popular Warriors series by Erin Hunter. Now, she has expanded her repertoire, exploring human characters and emotions.

Students can learn a great deal about the fiction writing process from writing fan fiction. The advantage of writing fan fiction is that the characters are already familiar to both the writers and most likely to the readers; therefore, young writers can concentrate on manipulating the plot as they are already familiar with the characters and settings.

Students can also create new characters – as my daughter has chosen to do with her Harry Potter fan fiction, “The Special”. The main character in her story is Aira, the twin sister to Scorpius, and the only daughter to Draco Malfoy.

With Wattpad, students can write stories and publish them chapter by chapter. Along the way, others can comment on their work, allowing the writer an opportunity to change things, delete things, and make improvements immediately.

Wattpad stories are free. Whether you’re online or off, use the devices you already own to carry an entire library wherever you go. The interactive, social aspect is one component that makes it such an appealing app for youth.