For Barnesklubb this past week, we met at the local library and I read aloud The Race of the Birkebeiners

Lisa Lunge-Larsen.  It is the story of two brave Birkebeiners and how they saved the infant Prince Håkon by skiing across the mountains in the dead of winter.  It is a true story of bravery and tenderness set in the year 1206, deep in the snow-covered mountains and valleys of Norway.  The kids and moms all enjoyed the story and it was pointed out to me later that all the boys (there were four in all) sat cuddled up with their mother as I read aloud.

On the nights of a full moon in Central Oregon, the Nordic Ski Club coordinates a moonlight snowshoe or nordic ski outing.  While the moon and stars are bright enough to make your way to the shelter (if you desire to go that far), a smaller loop trail is also marked at regular intervals with luminaries.  As we don’t have snow in town to go nordic skiing as I would have liked and an outing to Mt. Lassen or Mt. Shasta would have taken considerable more time and effort (and thereby fewer participants), we made luminaries. 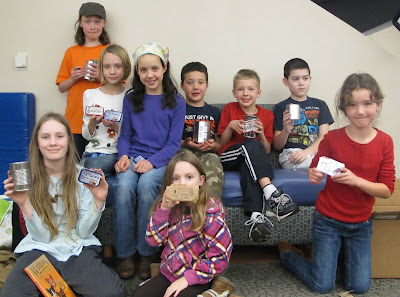 From one gathering to the next, I never quite know how many children to expect at Barnesklubb.  Generally, there are only 5 children (two of which are my own) but on occasion there are significantly more.  I was quite surprised, therefore, when I arrived at the library to see a small crowd of young, smiling faces awaiting my arrival.  I didn’t have quite enough tin cans for everyone to create their own, but I did think ahead and had brought along my stash of candy tins just in case.  Thus, every family was able to create a luminary while every individual (if desired) was also able to embellish the candy tin as a special treasure box.  Ideally, you would want to first sand off the paint of the candy tin – this gives a much nicer presentation and the design stands out much better against the silver aluminum rather than the distracting colors of the candy label. 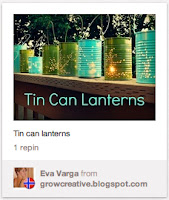 I have been collecting Barnesklubb ideas on Pinterest for sometime and luminaries are one that I see pop up frequently.  The morning of our gathering, I went to Pinterest and clicked upon my pin, Tin Can Luminaries, to print a few templates and/or ideas for the kids and realized I had made a mistake.  As an experienced teacher, I should have know better, but life tends to derail even the best of educators.  Sadly, I didn’t plan ahead enough to freeze water inside the cans. I had to instead make do with a stack of newspaper that the kids rolled up and stuffed into their cans so as to provide support when they began to puncture the tiny holes in the cans with a hammer and nail. This worked well enough, but I am sure a can of frozen water would have worked better.  Ah … next time.