We are so very excited!!  Way back in September we were matched with four other families as part of a Worldwide Culture Swap … we had signed up in June and it took a few months to have enough families outside of the US to be able to put together a group.  In our group, the families represented England, Turkey, the US Virgin Islands, and Ontario, Canada.  We, of course, represented the United States, specifically California.

We shipped our boxes in late October – as agreed upon by the participants – and then we waited.  As the days and weeks turned to months, we were actually beginning to lose hope.  The communication with many of the participants had been spotty.  I was fearful that we wouldn’t receive a box in exchange.  We had spent quite a bit on the contents and even more so on postage so we were fearful. 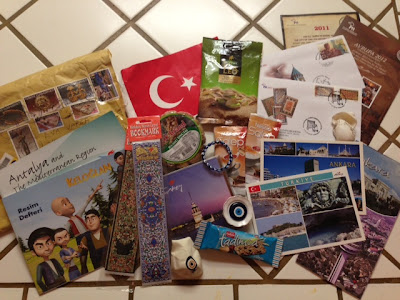 I had taken part in an ornament exchange through another group with which I’m connected. The participants had agreed to send handmade gifts.   As such, I sent a dreamcatcher that I purchased when we were on the coast; though I didn’t make it myself, it was handmade and unique.  While I know it is the thought that counts, I can not say I was not disappointed in the ornament I received in exchange, a m&m novelty ornament with a mini-bag of m&m’s.   As a result, I was beginning to think that these online swaps and secret exchanges weren’t worth the effort.

Imagine our surprise then when we received a notice in the mail that a package was awaiting us at the post office that required a signature.  We had nearly forgotten about the Culture Swap by now so when the clerk handed us the package, the first thing we noticed was the postage.  “Mom! Look at the stamps,” they both exclaimed.  “Wow!  It’s from Turkey!”

We were eager to get home and open our gift.  What a delightful surprise … a plethora of little goodies that gave us a taste for Turkey.

What a special swap box.  Indeed, it makes up for the two that have seemingly been forgotten.  Many, many thanks to Fatma and her boys!!