Serendipitously, the Wings of Freedom Tour came to our area just days after we had read about Pearl Harbor, the Battle of the Pacific, and ultimately World War II. It was a great opportunity to tour the authentically restored aircraft and immerse ourselves in living history.

We arrived just a few hours after they were scheduled to appear.  We were able to tour two of the three (the P-51 Mustang had not yet arrived). 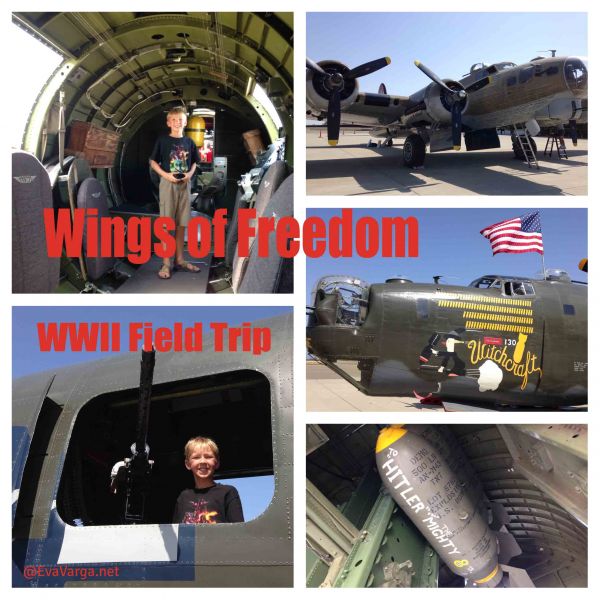 The Boeing B-17 Flying Fortress is a four-engine heavy bomber aircraft developed in the 1930s for the United States Army Air Corps.  The B-17 went from design board to flight test in less than 12 months and was the first Boeing military aircraft with a flight deck instead of an open cockpit.

In the Pacific, the B-17s earned a deadly reputation with the Japanese, who dubbed them four-engine fighters. The Fortresses were also legendary for their ability to stay in the air after taking brutal poundings. They sometimes limped back to their bases with large chunks of the fuselage shot off.

The Consolidated B-24 Liberator was one of the principal heavy bombers used by the US Army Air Force during World War II. It was produced in larger numbers than any other American aircraft and its exploits ranged the world over, seeing action in a variety of roles in all major theaters of the war.

The Wings of Freedom Tour is sponsored by the Collings Foundation, a non-profit, Educational Foundation (501c-3). Founded in 1979 to organize and support “living history” events that enable Americans to learn more about their heritage through direct participation. The original focus was transportation-related events such as antique car rallies, hill climbs, and carriage and sleigh rides. During the mid-eighties, these activities were broadened to include aviation-related events such as air shows, barnstorming, historical reunions, and joint museum displays.

The B-17, B-24, and P-51 are on the 25th season of the Wings of Freedom Tour, bringing historic aviation to your community!

Flights aboard one of the three for the B-17 or B-25 are also available – an ultimate immersion in history! You can see their 2014 schedule and book flights online at The Collings Foundation: Wings of Freedom.