Those who admire and respect Charlotte Mason may sometimes wish that she were here with us to tell us what books to use in our home schools. Good books are vital to the kind of education that we wish for our children and this responsibility weighs on us. Charlotte Mason stated that literature is used for character training and should be fun and engaging. All books should be developmentally appropriate to the child’s individual timetable. Literature books will not give you precise information, but they will give you a sense of the time period they were written in or about.

“The children must enjoy the book. The ideas it holds must each make that sudden, delightful impact upon their minds, must cause that intellectual stir, which mark the inception of an idea.” (School Education, p. 178) 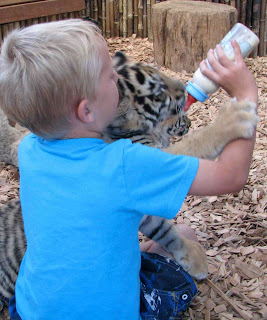 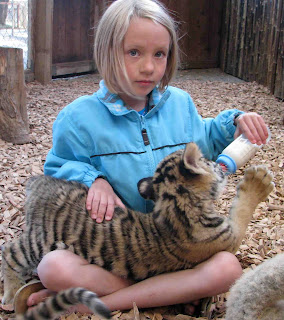 A week ago, we finished listening to the audio book, Tiger Tiger by Lynne Reid Banks.  We all enjoyed the story and it provided a springboard for an in-depth discussion about the class system of Ancient Rome that we previously hadn’t touched upon when we studied the ancients in history.  Additionally, it brought out a discussion about the ethical treatment of animals.  Tiger Tiger is designed for children and adults that can cope with the truth of history (the colosseum was not a pleasant place) – we were all spellbound.

Whether we read from Story of the World or from a selection of quality literature, I always try to provide a real-life experience for my children. This weekend, we had an opportunity to experience a tiny bit of what Aurelia must have enjoyed when she spent time with Boots.  We visited the West Coast Game Park and actually got to play with and feed two young tiger cubs.  We were also able to interact with two lion cubs and a caracal. 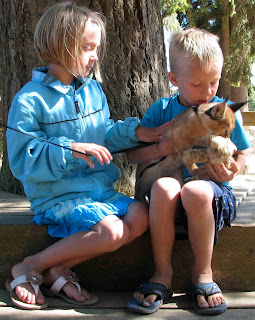 “The story of the fate of two captured tiger cubs in ancient Roman times. The focus of the actual story is on power, compassion, and martyrdom. After the two tiger cubs are brought to Rome, they are separated and lead entirely different lives. Brute, the larger and stronger cub, is taunted and trained to be a man-killer for the circus in the Colosseum. The smaller cub, Boots, is given to Caesar’s 12-year-old daughter, Aurelia, for a pet. Boots’ fangs are removed and his paws covered with leather pouches. Boots visits Aurelia frequently accompanied by his keeper, Julius, who worships Aurelia from afar. When Aurelia’s jealous cousin suggests playing a trick on Julius, she reluctantly agrees to hide Boots. When Boots escapes from the royal compound, Julius must pay the price: he’s sentenced by Caesar to fight both Boots and Brute in the Colosseum before thousands of Roman citizens. Aurelia pleads for Julius’s life, but her father is unyielding. Jan Francis’s narration is strong yet tender, projecting just the right amount of fondness and adoration in Aurelia’s relationship with Julius and Boots, and anxiety and compassion when Julius and Boots are condemned to fight for their lives. The long, slow days of playing with Boots in the palace are expertly balanced against the cold, cruel days of imprisonment that Brute experiences. Listeners should be aware that scenes of the martyrdom of Christians, slaves, and animals in the Colosseum are described in the story. A bittersweet tale.” – Wendy Woodfill, Hennipin Country Library, Minnetonka, MN