A friend of mine does a significant amount of traveling for his work and we recently received two postcards in the mail that he sent from the United Arab Emirates (UAE).  The UAE is comprised of seven emirates that share legal, political, military, and economic functions since 197.  Dubai has the largest population and is the second largest emirate by area, after Abu Dhabi (the capital). Revenues from petroleum and natural gas contribute less than 6% (2006) of Dubai’s $37 billion (U.S.) economy.  The majority of the emirate’s revenues are from innovative real estate projects, sporting events, and increasingly from tourism and other service-oriented businesses. 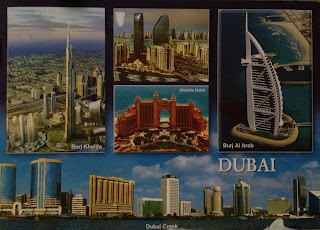 We completed our usual country fact sheet and spent a little time browsing topics that caught our attention:  architecture, food, and music.  The construction that has taken place in Dubai and Abu Dhabi in just the past 20 years is astounding.  We enjoyed browsing the photographs and artist renditions of the more well known sites featured here,  Dubai Architecture. 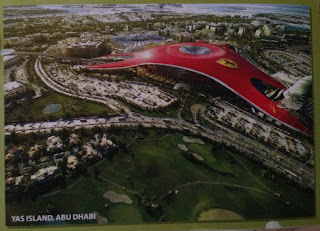 Arabic food is the main type of food in the UAE.  One of the most popular dishes is Shawarma, a dish similar to kebab that is made with lamb or chicken generally mixed with tomatoes, pickle, garlic sauce, and fries. Then they will wrap the mixture in a small Arabic roti  (a bread baked in clay ovens). Another favorite is falafel, an Arabic French fry that looks like a cutlet. They are made out of mixing chickpeas and different spices. Then deep-fry and served as a side dish. We are fortunate to have a new middle eastern restaurant in town and will be making a visit soon. 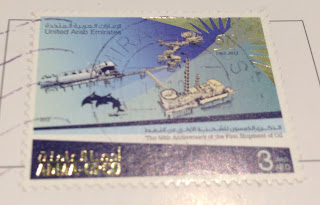 We also enjoyed listening to several videos on YouTube that featured Bedouin musicians performing traditional music.  We really enjoyed it!

On a bunny trail … I recently read a great book by Diana Abu-Jaber called, The Language of Baklava

Her memoir weaves stories of being raised by a food-obsessed Jordanian father with tales of Lake Ontario shish kabob cookouts and goat stew feasts under Bedouin tents in the desert. Her anecdotal stories and recipes (Yes!!! Recipes) bring to life the two cultures of Diana’s childhood–American and Jordanian–while helping to paint a loving and complex picture of her father who, like many an immigrant before him, cooked to remember the place he came from and to pass that connection on to his children. The Language of Baklava is a wonderful story.