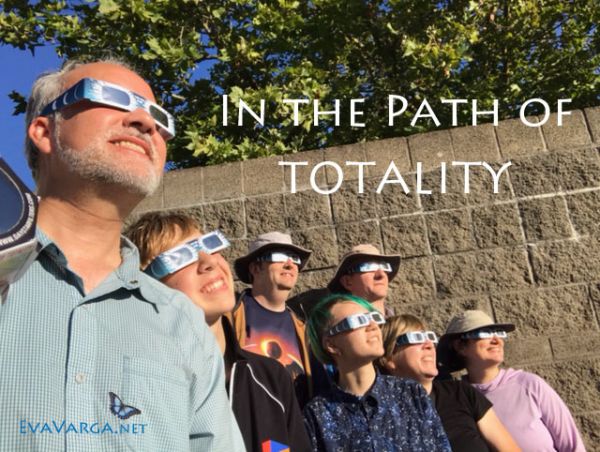 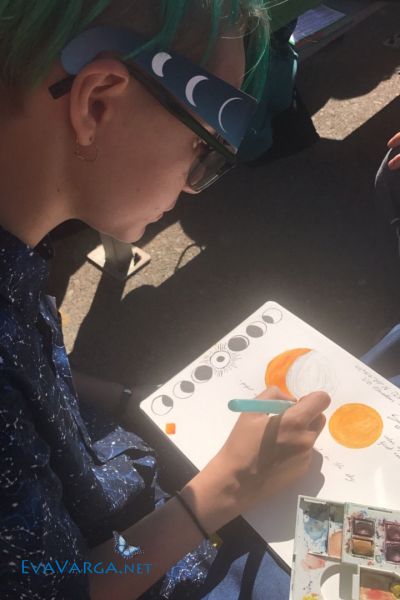 On August 21, 2017, Oregon will be the first to see the total eclipse of the Sun. This much anticipated solar eclipse will be visible across much of the United States. I first learned of this rare occurrence a year ago and quickly made plans to be sure we would be in the path. 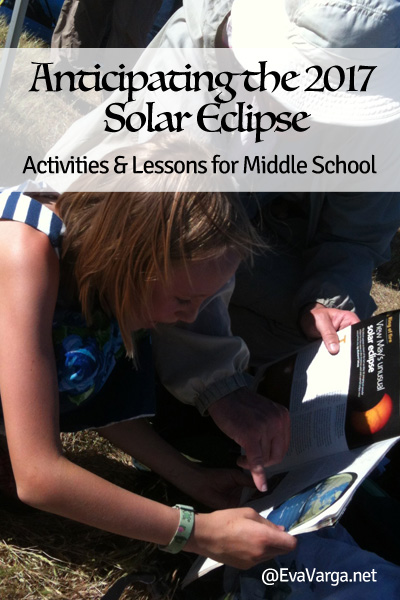 We purchased tickets to attend OMSI’s Eclipse Party at the Salem Fairgrounds and attempted to make hotel reservations in the area to no avail. We have thereby fallen back on a backup plan – staying with family in Eugene and driving up. I fear, however, that the road will be so congested we won’t reach our destination.

Anticipating the 2017 solar eclipse, I am delighted to share with you a number of lessons and activities with which you can engage your middle school students.

About the Solar Eclipse

A total solar eclipse is when the moon moves right in front of the sun, covering it completely for a very short time. It darkens the whole sky, lets you look right at the sun, and shows you the beautiful corona that surrounds the sun. Stars come out, the horizon glows with a 360-degree sunset, the temperature drops, and day turns into night.

Only look at the sun when it is 100% covered. You must use special solar viewing glasses whenever the sun isn’t completely eclipsed or it may cause irreparable eye damage.

The umbra (fully shaded inner region of a shadow) will hit the shores of Oregon at 10:15:53 am PDT near the small town of Otter Rock. From the time the shadow first touches land, it will take only two minutes for the shadow to race eastward. As the eclipse passes over the state, cities will experience various lengths of totality based on their varying distances from the centerline. At the Oregon State Fairgrounds, we will be treated to one minute and 53 seconds of shadow at just after 10:17am.

The eclipse will continue across the United States where Illinois will experience the longest eclipse duration at two minutes and 41 seconds. South Carolina will be the last state to witness the eclipse and the final shadow will be over the Atlantic Ocean near the west coast of Africa. See a map of the full eclipse path.

Solar eclipses occur during the new moon phase when the Moon moves between the Earth and the Sun and the three celestial bodies form a straight line, Earth-Moon-Sun. There are three kinds of solar eclipses, Annular, Partial, and Total. On even more rare occasions, a hybrid eclipse occurs when there is a combination of two.

An annular eclipse occurs when the Moon covers the Sun’s center, yet the moon’s shadow doesn’t quite reach the Earth. The Sun’s visible outer edges thus form a “ring of fire” or annulus around the Moon. The ring of fire marks the maximum stage of an annular solar eclipse.

We have been fortunate to observe an eclipse in the past. In 2012, we enjoyed an annular eclipse near Red Bluff, California.

A partial eclipse, which are visible to a greater number of people due to its wider path, occurs when the Moon comes between the Sun and the Earth, but they don’t align in a perfectly straight line and thus the Moon only partially covers the Sun’s disc. A Partial Eclipse can be seen on either side of the path of totality where the moon doesn’t completely cover the sun.

A total solar eclipse occurs when the Moon comes between the Sun and Earth and completely covers the face of the sun, letting the sun’s magnificent corona burst into view, and casts the darkest part of the shadow (the Umbra) on Earth. In this shadow, the Earth is almost as dark as night.

Check out the 2017 Solar Eclipse explainer video we created with mysimpleshow.

A hybrid solar eclipse occurs when the eclipse changes from an annular eclipse to a total eclipse along the path of the moon as it rotates about the Earth.

◉ Solar Eclipse for Beginners: General information on the science of a solar eclipse

◉ NASA’s Scientific Visualization Studio Eclipse Gallery: Scientifically accurate visualizations of solar eclipses including position of the Earth, Moon, and Sun, and path of the Moon’s shadow from different perspectives.

◉ Shadow and Substance: A simulation for Oregon showing where totality and partial phases can be viewed.

◉ NASA Eclipse Simulation: Students discover relative relationships between the Sun, Earth, and Moon, and how the Moon can eclipse the Sun.

◉ Explore the Earth’s geometrical relation to the sun by calculating where the sun will be in the sky for any date or time given a particular location on Earth.

◉ Eclipse in a Different Light: A Sun-Earth Day page for educators presented by NASA.

◉ In 1715, Edmond Halley published a map predicting the time and path of a coming solar eclipse.

◉ If you are a Scout, you won’t want to miss the opportunity to earn the BSA 2017 Solar Eclipse patch.