In my Facebook newsfeed recently, a memory popped up highlighting a field trip we took part in years ago when we first began our homeschool journey. Our visit to Paleo Lands Institute in Eastern Oregon is one of our fondest homeschool experiences. When we visit the Field Museum in Chicago last week, we reflected on this trip as we marveled at the many specimens they had on display – the most impressive, of course, was SUE (pictured below).

The unveiling of her 67-million-year-old skeleton at The Field Museum made global headlines in May of 2000. As the largest, best-preserved, and most complete Tyrannosaurus rex ever found, she is considered to be the most famous fossil ever found. She measures 40.5 feet long from snout to tail and 13 feet tall at the hip.

Interesting fact: While SUE is frequently referred to as a “she,” scientists don’t actually know her sex.

Virtually all parts of SUE’s skeleton are preserved in great detail—even the surface of her bones. Scientists can actually see where muscles, tendons, and ligaments once attached. Not only are most of the bones undistorted from fossilization, but cross-sections of the bones show that even the cellular structure inside remains intact. 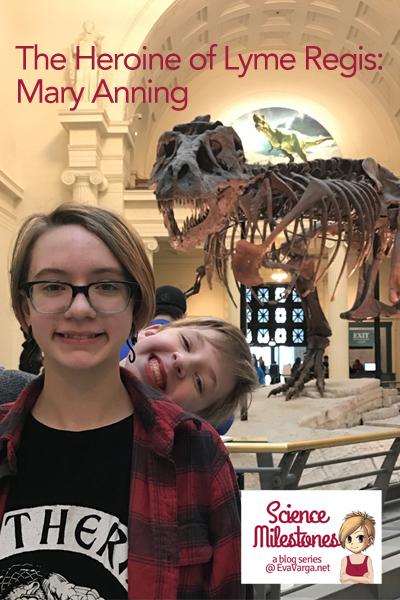 If SUE is the most famous fossil, who then is regarded as the most renowned fossilist the world ever knew?  The answer is Mary Anning.

Despite the fact that Mary Anning’s life has been made the subject of several books and articles, comparatively little is known about her life, and many people were unaware of her contributions to paleontology in its early days as a scientific discipline. How can this be, you ask? 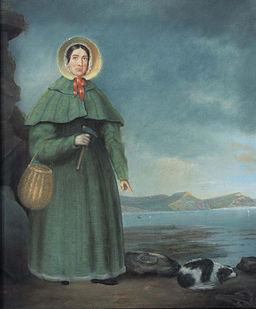 Mary Anning was born on the 21st of May 1799 to Richard and Mary Anning in Lyme Regis, Southwest England. Mary grew up in a prime location to lead a life of fossil collecting. The marine fossil beds in the cliffs in this area remain today a huge source of fossils from the Jurassic period.

Her findings contributed to important changes in scientific thinking about prehistoric life and the history of the Earth. At the age of 12, Mary Anning was to become one of the most famous popular palaeontologists, with her discovery of a complete Icthyosaur.

Interesting fact: Though she is now credited with the discovery, her brother had first found the specimen. Mary did find the majority of the remains and contribute significantly to the excavation work. Mary went on to find two more species of Ichtyosaur in her life.

In early 1821, Anning made her next big discovery with the finding of the first Plesiosaurus. She sent a drawing she made to the renowned George Curvier, who at first snubbed it as a fake. Upon further examination, he eventually reversed this statement finally giving Anning the respect she had deserved from the scientific community. This discovery is perhaps her most important find, from a scientific point of view.

The majority of Mary’s finds ended up in museums and personal collections without credit being given to her as the discoverer of the fossils. There are many factors contributing to this error: the lack of appropriate documentation of her special skills, her social status, and more importantly, her gender. Many scientists of the day could not believe that a young woman from such a deprived background could posses the knowledge and skills that she seemed to display.

For example, in 1824, Lady Harriet Sivester, the widow of the former Recorder of the City of London, wrote in her diary after visiting Mary Anning:

“. . . the extraordinary thing in this young woman is that she has made herself so thoroughly acquainted with the science that the moment she finds any bones she knows to what tribe they belong. She fixes the bones on a frame with cement and then makes drawings and has them engraved. . . It is certainly a wonderful instance of divine favour – that this poor, ignorant girl should be so blessed, for by reading and application she has arrived to that degree of knowledge as to be in the habit of writing and talking with professors and other clever men on the subject, and they all acknowledge that she understands more of the science than anyone else in this kingdom.”

After her death on the 9th of March 1847, her unusual life story attracted the attention of scholars around the world. Her story was the inspiration for the 1908 tongue-twister “She sells seashells on the seashore” by Terry Sullivan and in 2010, one hundred and sixty-three years after her death, the Royal Society included Anning in a list of the ten British women who have most influenced the history of science.

➤ Build upon your child’s interest in fossils and geology in an in-depth Earth sciences curriculum study. 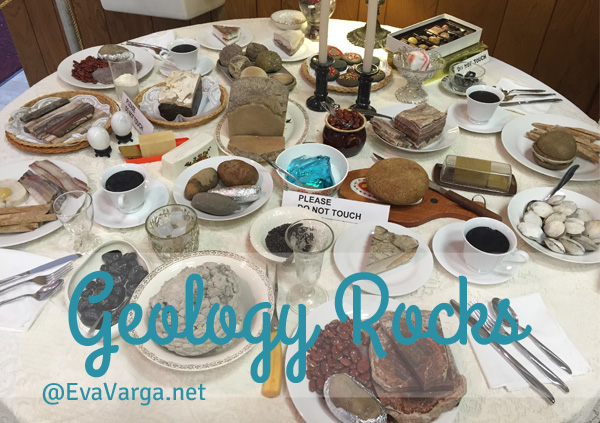 ➤ Visit a local geology club in your area and inquire about getting started in collecting.

What a fabulous day! We departed home at 7 a.m. for the drive to Fossil. Despite a few setbacks, we arrived safe and sound just after 10 a.m. where we met with Will Boettner, the Executive Director of the Oregon Paleo Lands Institute. After introductions and a stop in the necessary or lu, we drove the short distance to Wheeler High School whereby we listened to a volunteer as she explained a little about the geology of the area and what we could expect to find.

The fossil beds were formed 30 million years ago when volcanic ash fell during the formation of the present day Western Cascade Range. The ash was washed into the lake basin along with leaves and other plant material, level after level piling up. The ash preserved the leaves long enough for impressions to form under the pressure of the overlying layers. 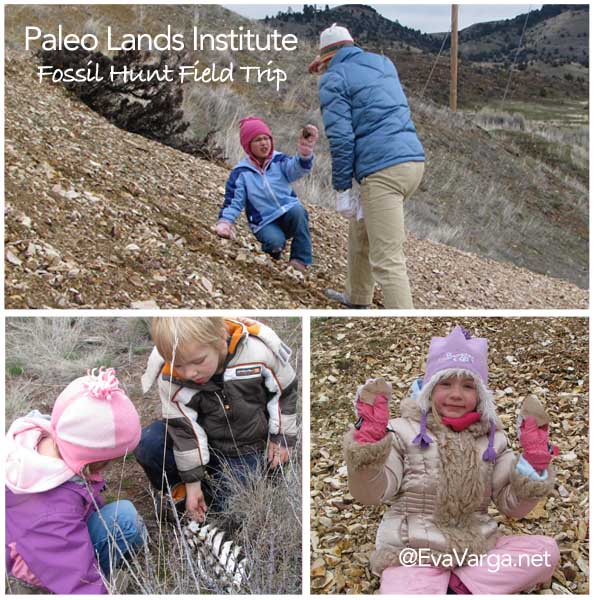 About 35 species of plants, most of them belonging to genera that are no longer native to the Pacific Northwest, are found there. The most common plants are alder, maple, beech, dawn redwood and pine in what appears to represent a deciduous hardwood forest. This implies, according to Will Boettner, that the climate at that time was much more moist and more temperate than is presently the case in the shrub steppe and savannah of today.

We spent about an hour ‘excavating’ in the shale behind the high school. Everyone was successful in finding fossils. I was delighted with how intrigued the kiddos were as they diligently picked up piece after piece of shale in hopes of finding a little treasure preserved between the layers. Prior to departing, we were able to browse the many fossil samples that have been found previously, including several amphibians and fish species.

We took a break for lunch … whereby Will shared more about his experiences, the geology of the John Day Basin, and about the community of Fossil. We then proceeded southwest to the Clarno Unit of the John Day Fossil Beds for a guided nature walk through a canyon.

It was a delightful walk. Everyone was entranced by one thing or another. We all had an opportunity to ask questions and explore the region more closely. We saw first hand how the layers of sediment had built up over millions of years and how the rocks formations had changed over time due to weathering. We talked about the impact man has had on the water table in just the past 150 years or so… changing the once temperate, deciduous forest to the dry scrub land of today (mostly Juniper and Sagebrush). Everyone walked away with a new awareness and appreciation of the natural history of our region.

Thank you to Will Boettner of Oregon Paleo Lands Institute for providing such a wonderful learning opportunity for us all.

“Do what you can
with what you have,
where you are.”