Rosalind Franklin, a scientist whose role in the discovery of DNA structure in 1953 has been forgotten by many, has a chance to be immortalized in a feature film. Throughout her career she faced sexism at nearly every turn. She also happened to be Jewish, which heightened the prejudice against her. Her name may soon be on the tips of everyone’s tongue and her role in the discovery of DNA Structure known to all. Entertainment One has acquired the script to Exposure, her life story.

In 1962 James Watson, Francis Crick, and Maurice Wilkins jointly received the Nobel Prize in physiology or medicine for their 1953 determination of the structure of deoxyribonucleic acid (DNA). Rosalind Franklin (1920–1958), a colleague of Wilkins, died of cancer at the age of 37, and was thereby not equally honored because the Nobel Prize can only be shared by three scientists. It was her work in X-ray crystallography, however, that proved critical to the correct solution to DNA structure. 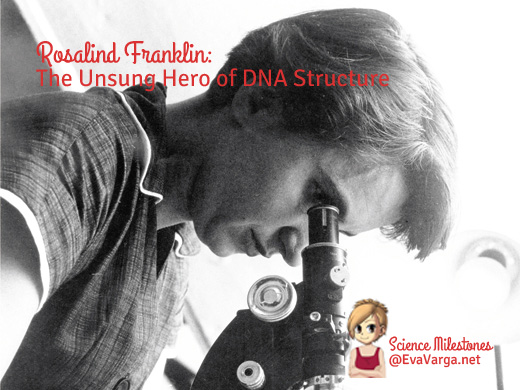 DNA is the material embedded in the cells of all living organisms that carries the genetic coding that determines how a living thing will look and function. It is found in the nucleus of each cell and is unique to every individual – whether human, mountain lion, or butterfly. Its full name is deoxyribonucleic acid, which can be complicated to say, so we usually refer to it as DNA for short.

DNA is so tiny that it can not be seen unless we use a very powerful microscope. If we could see it we would see that it looks like a twisted ladder, which scientist refer to as the double helix. Each rung or step on the DNA ladder is composed of two letters.

As we read the DNA ladder, the letters combine to form 3-letter words called codons. Then, these codons combine to form sentences that we call genes. These genes are the basis for your chromosomes, which give your body a blueprint or set of instructions for life.

Every human has 23 pairs of these DNA chromosomes that determine what we look like and how to perform. We get one set of chromosomes from our mother and one set from our father. Our chromosomes determine whether our eyes will be blue or brown, what color our skin and hair will be, whether we will be a boy or girl and so much more. 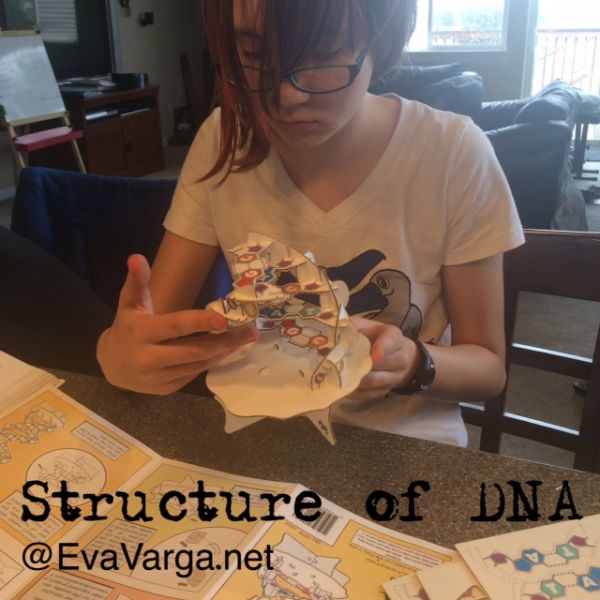 Inspired by Linus Pauling’s success in working with molecular models, James Watson and Francis Crick rapidly put together several models of DNA and attempted to incorporate all the evidence they could gather. Franklin’s excellent X-ray photographs, to which they had gained access without her permission, were critical to the correct solution. Along with Wilkins, Franklin’s partner, the four scientists announced the structure of DNA in articles that appeared together in the same issue of Nature.

After the publication, they moved on to different projects. Franklin went to Birkbeck College, London. Before her untimely death from cancer, she made important contributions to the X-ray crystallographic analysis of the structure of the tobacco mosaic virus, a landmark in the field. By the end of her life, she had become friends with Francis Crick and his wife and had moved her laboratory to Cambridge, where she undertook work on the poliovirus. 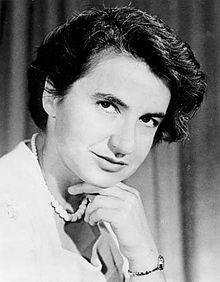 Rosalind Franklin was born July 25, 1920 to a Jewish family in London, England. Educated at private schools in London, she studied natural sciences at Newnham College, Cambridge, from where she graduated in 1941. She joined the University of Cambridge where she earned a research fellowship in a physical chemistry laboratory under Ronald George Wreyford Norrish. The British Coal Utilisation Research Association offered her a research position in 1942, and started her work on coals. This helped her earn a PhD in 1945.

In 1947, she went to Paris as a chercheur (post-doctoral researcher) under Jacques Mering at the Laboratoire Central des Services Chimiques de l’Etat, where she became an accomplished X-ray crystallographer. She returned to London in 1951 and became a research associate at King’s College. She was compelled to move to Birkbeck College after two years, however, owing to disagreeable clashes with her director and more so with her colleague Maurice Wilkins. At Birkbeck, J. D. Bernal, chair of the physics department, offered her a separate research team. She died on April 16, 1958 at the age of 37 of ovarian cancer.

Create a model of DNA with colorful Wiki-Sticks

Explore the DNA Teaching Resources from Karyn at Teach Beside Me

Challenge your students with this Transcription / Translation Lab Activity

Watch this fabulous NOVA documentary on PBS, The Secret of Photo 51