My son was the first in our family to receive a nomination to take the ALS Ice Bucket Challenge. As a nine year old, he wasn’t aware of this phenomenon that has swept the country.

I had given the challenge some thought before my son was nominated – wondered how I would respond if I were nominated as I assumed I would be soon enough, as active as I am on social media. I didn’t expect that he would be nominated first.

Charitable giving is something we work hard to instill in our children. We talk about finances at our monthly family meeting and engage the kids in budget decisions. We encourage the kids to select causes that are dear to their hearts and expect them to give annually.

Last year, my son baked and sold cupcakes to raise awareness – and $63 in funds – for Nystagmus on Wobbly Wednesday. Soon thereafter, my daughter donated $50 of her own money to the Haiyan Hurricane Relief Fund.

The Ice Bucket Challenge is an effort to raise funds for amyotrophic lateral sclerosis (ALS), commonly referred to as Lou Gehrig’s disease. It’s an extremely devastating neuro-degenerative condition that affects nerve cells in the brain and spinal cord. According to the ALS Association, approximately 5,600 people in the U.S. are diagnosed each year, and the average life expectancy is about two to five years from that point.

Between July 29 and Aug. 21, the ALS Association had received $41.8 million in donations, compared to just $2.1 million during the same time period last year. This is a prime example of social-media outreach benefits, and I don’t think there’s a person in the world who could downplay that success.

The Ice Bucket Challenge process is simple. Once you are nominated, you have 24 hours to complete the same task. Dump a bucket of ice water over your head and then pass it along by naming others to do the same. If you don’t follow through within the timeframe, you are expected to donate $100 to the cause. 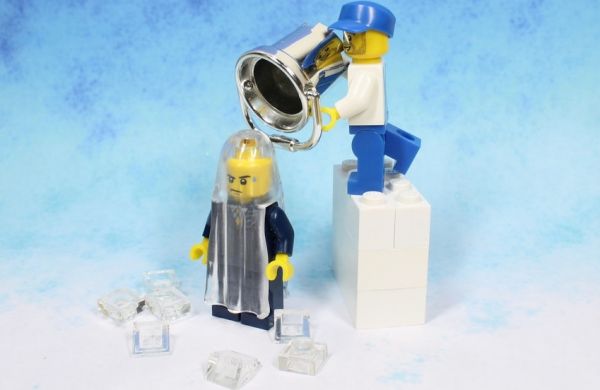 When I explained to my son that he had been nominated, he was at first perplexed.  I then shared with him the video whereby his friend nominates him for the challenge and he became very upset.  “I don’t want to do this!” he exclaimed with fear in his voice.

First and foremost, I am certainly not going to coerce my child to follow through on some dare – even if it is for a good cause. I want him to have the courage to stand up for himself and say no.

As we talked about it, he and his sister expressed their feelings clearly. They both felt it was a tremendous waste of water, especially here in NorCal where we are experiencing a drought.

There are about 800 million people in the world who don’t have access to clean drinking water – my kids have seen this first hand while traveling in China. Dumping a clean bucket of water on our heads just seems crazy and insensitive.

We brainstormed alternatives – bringing a bucket to the lake during sailing class and dumping a bucket of lake water over our heads – but even then he was opposed. I didn’t push it. I want him to trust that his words and feelings will be validated.

I am deeply saddened, however. First, I am disappointed that it takes getting publicly called out for someone to donate to a specific cause.

When my son was attempting to sell cupcakes to raise money for Nystagmus, it was if we were asking people to pull their sweet tooth! The Ice Bucket Challenge is not just raising awareness, it’s bullying.

People should feel led to give because they want to do their part. They should feel like their efforts are making a difference and that their contribution is appreciated.

I am also now beginning to see spin-offs, local non-profits and youth sports teams, for example, attempting to capitalize on the success of this phenomena. This rubs me the wrong way.

Charitable Causes Dear to Us

During our discussions as a family, we expressed a hope that this challenge could serve as an opportunity to raise awareness about all charities with which the public may not be familiar.

We thereby selected a few causes dear to us that we would like to share with you, especially since their respective “awareness” times are approaching.

November 5th is Wobbly Wednesday – a day set aside to raise awareness for Nystagmus. Nystagmus is a condition of involuntary eye movement, acquired in infancy or later in life, that may result in reduced or limited vision. Due to the involuntary movement of the eye, it is often called “dancing eyes” or “wobbly head’.

My son was diagnosed when he was just a few months old. Both of my brothers were also diagnosed as children.  Though Nystagmus is not as debilitating a disease as ALS, it is is one by which we are personally affected.

October is Dysautonomia Awareness Month. The most common form, Postural Orthostatic Tachycardia Syndrome (POTS), is thought by the Mayo Clinic to affect 1 in 100 teens, and at least 500,000 -1 million people in the United States.

Dysautonomia commonly causes issues with heart rate and blood pressure, and changes when a person stands up. So, many people with various forms of dysautonomia faint, or feel like they are going to faint. They can also have a very fast heart rate that is frightening, extreme fatigue, problems with digestion, memory, and many other unconscious bodily functions.

The symptoms vary based on the disorder and every individual is different. This makes it hard for some doctors to recognize, and often patients are left thinking it’s anxiety, or all in their head. Women are affected more than men (an estimated 5:1 ratio), and many people are left completely disabled. Some of the more rare forms are fatal. To learn more about POTS, visit Dysautonomia International, Inc.

Crohn’s and Colitis Awareness Week is December 1-7. Crohn’s disease and ulcerative colitis are both major categories of Inflammatory Bowel Diseases (IBD), affecting an estimated 1.4 million Americans. These chronic diseases tend to run in families and they affect males and females equally. While IBD can affect anyone, Caucasians are more likely than other ethnic groups to have IBD.

It is often difficult to diagnose which form of IBD a patient is suffering from because both Crohn’s Disease and ulcerative colitis cause similar symptoms. To learn more about IBD, visit the Crohn’s & Colitis Foundation of America website.

May is Celiac Awareness month. Celiac disease is an autoimmune disorder that can occur in genetically predisposed people where the ingestion of gluten leads to damage in the small intestine.  It is estimated to affect 1 in 100 people worldwide.

Celiac disease can develop at any age after people start eating foods or medicines that contain gluten. Left untreated, celiac disease can lead to additional serious health problems. These include the development of other autoimmune disorders like Type I diabetes and multiple sclerosis.

After much deliberation, my son declined the nomination to take the ALS Ice Bucket Challenge and as a family, we vowed to stand by him. Instead, we used this as an opportunity to teach the kids about ALS, one of the most traumatic and heartbreaking diseases out there.  We will most definitely be making a monetary contribution.

The Ice Bucket Challenge was indeed a success.  It helped to not only raise funds but also raise awareness.  At least in this home.

Whatever cause is dear to your hearts, volunteer, donate when your situation permits, and do your part to raise awareness. If you choose to do that after dumping a bucket of icy water on your head, it’s your call. Just don’t stop once the water dries and the social media frenzy moves on to the next craze.