Today’s STEM Club was a lot of fun; we made edible models of plant cells and though we got a little sticky, everyone was able to summarize the function of the cell organelles.  After we cleaned up, the kids were given the opportunity to make their own slides (onion skin and cheek cells) so they could observe real cells under a microscope.  At home, my own kiddos spent a little more time with the microscope, sketching and labeling the organelles they could identify under magnification. To aide in remembering the function of cell organelles, the kids also enjoyed creating an interactive tool for their science notebooks. 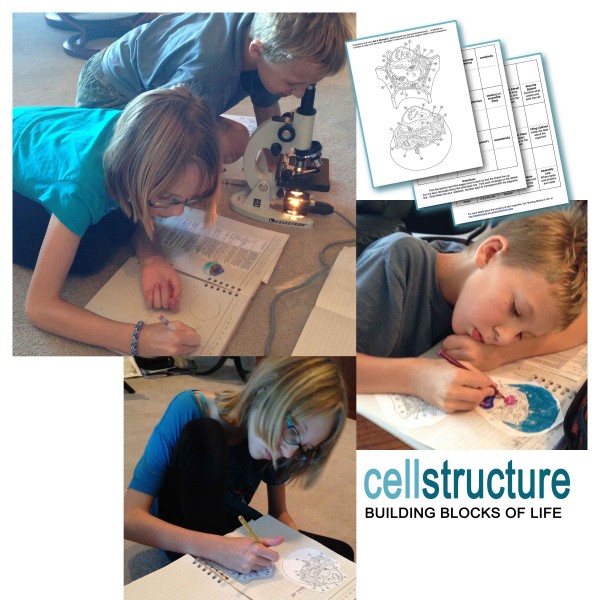 All living beings are made up of cells. Some of them are made up of only one cell and others have many cells. Cells got their name from an Englishman named Robert Hooke in the year 1665. He first saw and named “cells” while he was experimenting with a new instrument we now call a “microscope.” For his experiment he cut very thin slices from cork. He looked at these slices under a microscope. He saw tiny box-like shapes. These tiny boxes reminded him of the plain small rooms that monks lived in called “cells”.

Look around at your house and the houses around you. They are made from smaller building materials such as wood, bricks and cement. So are the cars in the street and the bike you ride. In fact, everything is made from building blocks including living things. If you take a look at your home you will notice it is enclosed by outer walls. All cells are enclosed within something called a plasma membrane (sometimes called the cell membrane). The plasma membrane is not exactly the same thing as the wall in your house, but it does hold parts of a cell inside. These parts of the cell are what biologists call organelles (Latin for little organs).

By the help of microscopes, there is nothing so small as to escape our inquiry; hence there is a new visible world discovered to the understanding. ~ Robert Hooke

If you look at very simple organisms, you will discover cells that have no defined nucleus (prokaryotes), others that have a nucleus and many organelles (eukaryotes), and cells that have hundreds of nuclei (multi-nucleated). Humans may have hundreds of types of cells.  The thing all cells have in common is that they are compartments surrounded by some type of membrane. The main purpose of a cell is to organize. Cells hold a variety of pieces and each cell has a different set of functions that are unique to each type of organism.

Cells are amazing. They are all made of similar building blocks but they do many different things depending on how they are programmed. Some cells carry oxygen to parts of our body. Other cells defend against invading bacteria and viruses. Some cells are used to carry oxygen through the blood (red blood cells) and others transmit signals through out the body like the signals from your hand to your brain when you touch something hot. Some cells can even convert the sun’s energy into food (photosynthesis). There are hundreds of jobs that cells can do. Cells also make other cells in a process called cell division – something other building blocks can not do.

Plant cells are easy to identify because they have a protective structure called a cell wall made of cellulose. Plants have the wall; animals do not. Plants also have cell organelles like the chloroplast (which contain green pigments or chlorophylls where photosynthesis takes place, giving plants their green color) and large water-filled vacuoles. 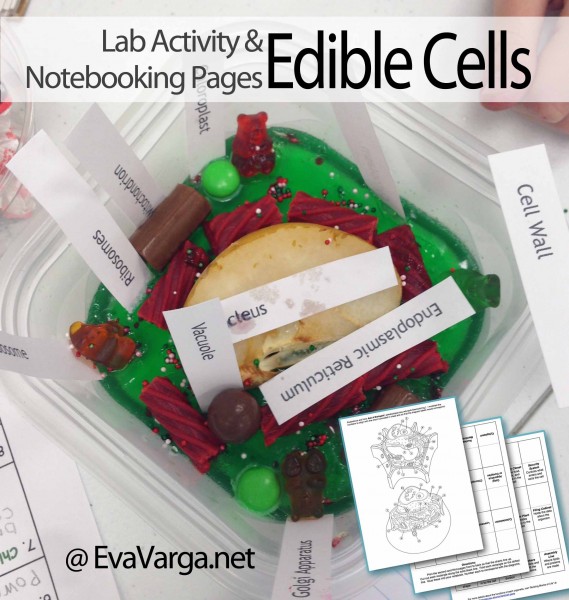 As the kids worked together to create an edible model of a plant cell, I distributed a handout that defined the role of the organelles in detail.  I also compared the cell organelles to a factory, giving a real life analogy for each cell function.  These descriptions were easier for the kids to remember.  As they worked, I walked around and ‘quizzed’ everyone on the role each organelle played in the cell function.  At the conclusion of the class, I distributed a diagram that labeled the cell parts and included small little flip books.  They were instructed to cut out and glue each into their notebook, numbering each to correspond to the diagram and handout.  If you would like these handouts, you may download them for free simply by subscribing. These printables will be included in the next Science Logic curriculum unit to be released soon.