On 8 Nov, 1895, Wilhelm Conrad Röntgen discovered an image projected far beyond the possible range of the cathode rays (now known as an electron beam) cast from his cathode ray generator. Further investigation showed that the rays were generated at the point of contact of the cathode ray beam on the interior of the vacuum tube, that they were not deflected by magnetic fields, and they penetrated many kinds of matter. 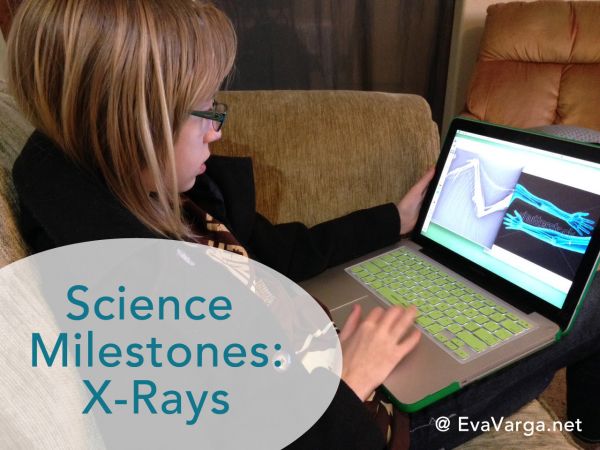 A week after his discovery, Röntgen took the very first picture using X-rays of his wife Anna Bertha’s hand. When she saw her skeleton she exclaimed “I have seen my death!”   The photograph electrified the general public and aroused great scientific interest in the new form of radiation. Röntgen named the new form of radiation X-radiation (X standing for “Unknown”), hence the term X-rays. 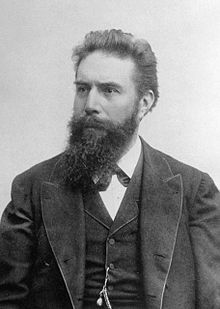 Wilhelm Conrad Röntgen was born on March 27, 1845.  He first attended the Federal Polytechnic Institute in Zurich as a student of mechanical engineering and graduated with a Ph.D. from the University of Zurich in 1869.

Röntgen was married to Anna Bertha Ludwig and had one child, Josephine Bertha Ludwig.  Röntgen died on 10 February 1923 from carcinoma of the intestine. It is not believed his carcinoma was a result of his work with ionizing radiation because of the brief time he spent on those investigations, and because he was one of the few pioneers in the field who used protective lead shields routinely.

Like other contemporaries, Röntgen did not take patents out on his discoveries and donated the money for his Nobel prize to the University of Würzburg. Following World War I, he fell into bankruptcy, He spent his final years at his country home near Munich. In keeping with his will, all his personal and scientific correspondence were destroyed upon his death.

In honor of his accomplishments, the International Union of Pure and Applied Chemistry named element 111, Roentgenium, a radioactive element with multiple unstable isotopes, after him in 2004.

Almost everything that we know about distant objects in the universe comes from studying the light that is emitted or reflected by them. The entire range of energies of light is called the electromagnetic spectrum. Arranged from high energy, short wavelength to low energy, long wavelength, the electromagnetic spectrum is divided into gamma rays, x-rays, ultraviolet, optical (visible light), infrared, microwaves, and radio waves.  All electromagnetic waves travel at the same speed in space. Our eyes are sensitive only to a narrow band of electromagnetic radiation called visible light.  To learn more about the spectrum, NASA has a great website devoted to the Chandra X-ray Observatory with photographs and activities you can download for free.

In medicine, an x-ray is sometimes used to produce images of the structures inside the body. Because of their short wavelength, x-rays can pass through the body, but are absorbed in varying amounts depending on the density of the material they’re passing through. This is why bones appear white on x-ray images. They are the most dense, and therefore block the most x-rays from getting through; muscle and fat are less dense, and appear in varying shades of gray; the air in between is not very dense at all, and shows up black. X-rays are often used to quickly examine the bones and teeth. Sometimes a contrast medium—such as iodine or barium—is introduced to provide more detail in the chest and abdomen, as well. This substance blocks x-rays and shows up white on x-ray.

To find out about more people born in March hop on over to iHomeschool Network’s March birthdays page.