Today was far more relaxed and enjoyable (on my part, anyway) than yesterday. Everything went much more smoothly though we didn’t get to all the activities I had planned. Better to be over-prepared, I’ve learned. I also neglected to take many pictures.

We started out with a lesson on Hans Christian Andersen. Most of the children were not familiar with his name but were in fact familiar with his stories (The Ugly Duckling, The Emperor’s New Clothes, The Little Match Girl, and Thumbelina). I explained that in addition to writing many wonderful stories that we enjoy to this day, he was very skilled at an art known as scherenschnitte (shear-n-SNIT-a) or paper cutting. 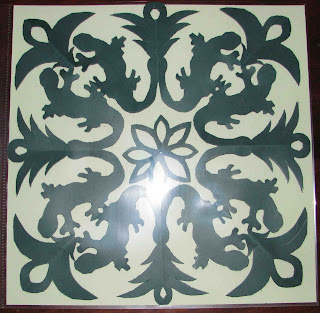 As there were no televisions or radios in his day, people would frequently sit around a fire and share stories verbally. While Andersen told stories, he would generally also fold and cut paper. At the conclusion of his story, he would unfold the paper to reveal an elaborate paper cutting – a picture that usually had nothing to do with the story he was telling. The paper cutting told a completely different story. 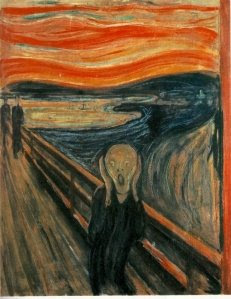 I then led the children through 2 different paper cuttings – one the common fold for snowflakes (which only about half had done previously – this actually surprised me). The other, a simple chain of paper dolls. All the children were successful, though some of the youngers needed a little assistance with cutting through the thick paper folds.

We then gathered on the floor and I introduced Norwegian Folk Dancing. I had tried to find a lodge member that is skilled in folk dancing to volunteer but a las, they were on vacation this week. I am not a dancer – nor have I ever taken a dance class. However, with the exception of a few, most all of the children have taken classes and I knew they would be comfortable with the simple choreography. We thereby spent a little time practicing a few basic steps without music and will continue to practice again tomorrow. I wish I had introduced this earlier so that we could have had more time to practice. Note for next time. 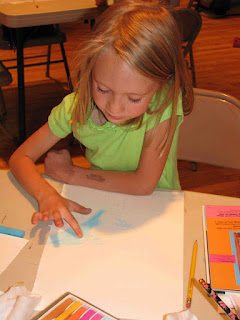 We enjoyed a snack of krummkakke and then we gathered on the floor again for a lesson on Edvard Munch. I spoke briefly of biography and we then spent a few minutes studying his painting, The Scream. I asked the children what kinds of things they do when they are scared and everyone shared. Many said they would hide under a favorite blanket or hug a lovie. Some said they would go to their mom. 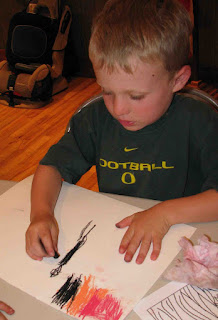 We returned to the tables and I distributed paper, pencils and chalk pastels. Some children opted to color a black outline of Munch’s The Scream but most chose to create their own works inspired by his. They drew pictures of themselves in a scary situation and used lots of colors. Some tried to recreate Munch’s work themselves. This activity was a great success. The children who had previously expressed that even coloring was difficult, focused their efforts and created art. 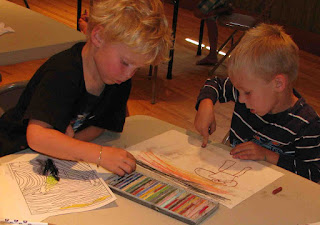 When most were finished, I gathered those that were done on the floor and I read aloud Donald and the Troll; An Adventure in Norway (Disney’s Small World Library). Those that were not finished stayed at the table to continue working quietly as they listened to the story from a far. Parents arrived as we were reading and the children dispersed as quickly as they had arrived.