Another successful day! As the children arrived, I asked that they each put a white base coat on a small square, wooden frame. We set these up to dry and then I gathered everyone on the floor for a lesson on the Vikings.

I read aloud Vikings by Denise Ryan (a Top Readers book by Weldon Owen Publishing). I then shared the pictures from two other titles, Who Were the Vikings by Jane Chisholm & Struan Reid (Usborne Starting Point History) and The Vikings by Robert Nicholson & Claire Watts (Scholastic). We also enjoyed looking over a 3-dimensional model of a Viking village that a student had made years ago and donated to the lodge. 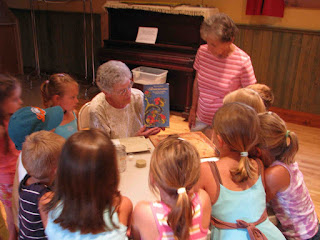 The children then returned to their tables and I led them through a simple stitching activity to create their own Viking longboats. Most had never sewn before and I was impressed with how quickly they picked it up. Only the youngest required assistance to finish. The boats were made from sheets of craft foam (rather than the corrugated craft paper as suggested – the foam was less expensive and I thought the kids would enjoy choosing their own color).

When everyone was finished, we set the boats aside and practiced the steps to the folk dance we learned yesterday. We nailed it on the second try and I was confidant we would be able to show their moms at least a glimpse of Norwegian folk dancing. 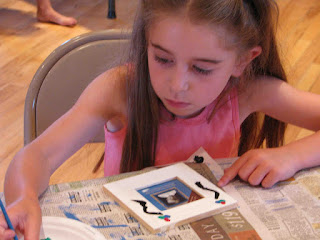 We then gathered around a table where Barb, a member of the lodge skilled at Rosemaling, was seated. She showed the children the tools she uses and demonstrated how to make a basic S and C stroke. She showed how she uses her opposite hand to rest her painting hand upon. She showed how she load her brush up with paint and how to blend the colors. I was again very pleased with how attentive the children were as she spoke. Once Barb had finished the sample frame, the children returned to their table and practiced the stroke on a piece of scratch paper. When they showed they could do a basic S and C, we distributed their frames and allowed them to give Rosemaling a try along the border of the frame. 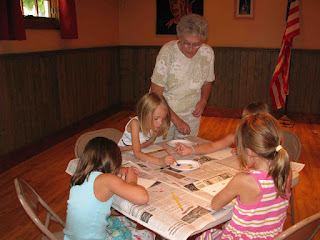 I was very impressed with the work of the students. The three youngest gave it a try – but thereafter asked, “Can I paint the whole thing?” Their frames, in the end, looked more Modern or Matisse inspired but at least they gave it a go.

We cleaned up, enjoyed watermelon and another traditional pastry, and signed a ‘thank you’ card. Moms began to linger in and when everyone arrived and were seated, we presented them with our quickie version of a folk dance. I was quite impressed with how well we pulled it off considering how little preparation we had. Kudos to the kids! 😀 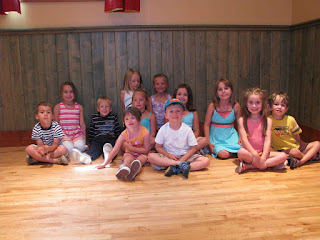