On Saturday morning, we went for a little walk along the Tower House Trail in Whiskeytown National Recreation Area.  We had didn’t know what to expect but we’d hoped to observe dragonflies for the August Outdoor Hour Challenge.    Though we did observe a few from a far, what we discovered was much more alluring. 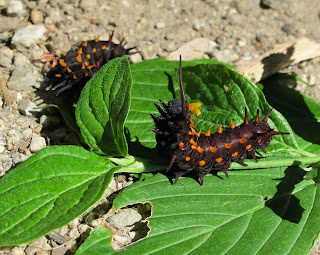 The munchkins and I were immediately intrigued.  I had never before seen a caterpillar quite like this one in the states.  As we observed their behavior, I was reminded of my weeks in Ecuador as part of an Earthwatch Expedition, Rainforest Caterpillars.  You can read my post about that experience here. 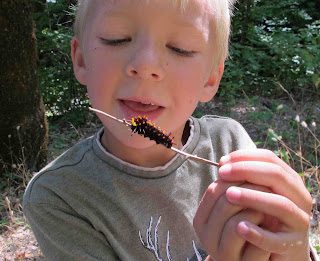 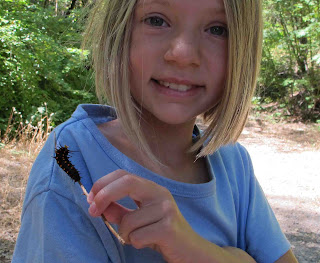 What struck us was that the caterpillar would extend this ‘Y’ shaped tube from just behind it’s head when it was agitated.  As it relaxed, it would pull it back down.  Way cool!   Covering its body were numerous tentacles (soft to the touch), red and relatively short along the dorsal side and black along the sides of its body. 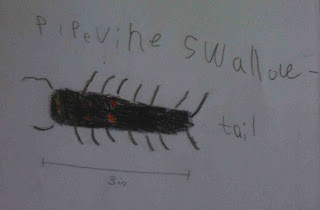 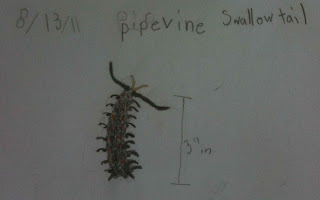 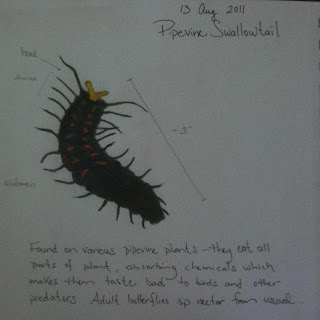 Upon our return home, we immediately looked it up and discovered they were Pipevine Swallowtail caterpillars.  As larvae or caterpillars, they eat all parts of the plant – stems and leaves both.  As an adult butterfly, they feed upon the nectar of the usual host of flowering plants that attract Lepidoptera.
As per usual, the munchkins wanted to bring them home to watch them change into a chrysalis and eventually emerge as a butterfly.  As we’ve just moved, I was not prepared for this and managed to convince that we would consider this for next time.