From a tree’s tiny root hairs buried in the ground to the highest leaves in its crown, each part of a tree plays an important role in helping it function.  By acting out the parts of a tree, students be able to describe the general structure of a tree as well as explain how different parts of a tree help the tree survive.

In my post, Monocots vs. Dicots, I discussed Angiosperms in detail.  This post focuses upon the Gymnosperms.

Parts of a Tree

I began the lesson by first asking the class how trees get what they need to survive (food, water, air, nutrients, etc.).   As I elicited their prior knowledge, I slowly introduced a number of terms that were new to most of them.  We didn’t take the time in class to write out definitions so I encouraged them to add them to their notebooks when they got home.  The vocabulary terms I introduced were:

When we were familiar with each term, we acted out the parts of the tree. As I introduced each word, I had assigned each student a role or part of the tree and handed out a card with their ‘lines’.  They loved this so much they were laughing and it was hard to keep them focused.  You can watch a short video of their ‘performance’ here:

If Trees Could Talk

One of the best ways to learn about a tree is to look at its annual rings – the science of dendrochronology.  Tree rings show patterns of change in the tree’s life as well as changes in the area where it grows.  I shared with the class a cross-section of a Ponderosa Pine and a Western Hemlock.  We compared the bark and the growth rings of each and discussed how these rings could be used to tell stories of the trees past (fire or insect damage, years of drought or slow growth compared to years of abundant rain). 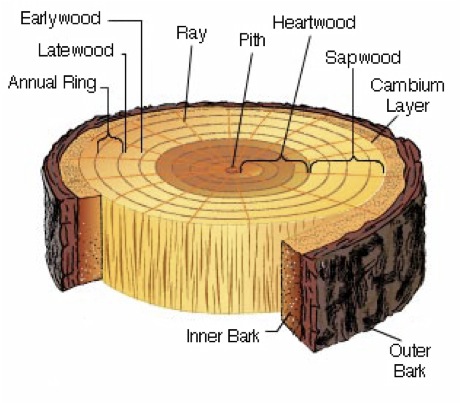 I then read aloud the following story about a tree and asked them the questions listed below to check for their understanding.

Once upon a time, a tree grew in the forest.  In its first 10 years it grew slowly because the large trees overhead blocked the sunlight.  In its 11th year, the large tree next to it blew down in a storm.  This allowed sunlight to reach the little tree, and for the next 10 years it grew rapidly.  In its 21st and 22nd years there was a severe drought, and the tree could not get enough water.  This stress caused the tree to grow very slowly for three years.  In its 25th year, favorable conditions returned and the tree grew normally for 15 years.  In its 40th year, wildfire raged through the forest.  The tree’s thick bark enabled it to survive, but it was deeply scarred.  It grew slowly for several years after that.  Year 45 was particularly bad.  Bark beetles got under its skin, fungus entered its body through woodpecker holes, and caterpillars ate most of its leaves.  For five years the tree hardly grew at all and became very weak. In its 50th year, it blew down in a storm.  A science teacher found the fallen tree and used a chain saw to make a big tree cookie from the trunk.