As part of a statewide celebration to honor Oregon’s 150th birthday, our library foundation is partnering with the statewide Oregon Reads program to present three books. This year’s main selection is the nonfiction tome “Stubborn Twig: Three Generations in the Life of a Japanese American Family,” by Eugene author Lauren Kessler, head of University of Oregon’s graduate program in literary nonfiction. For the first time, the festivities will include a children’s book, “Apples to Oregon,” by Deborah Hopkinson, and a young adult novel, “Bat 6,” by Virginia Euwer Wolff. 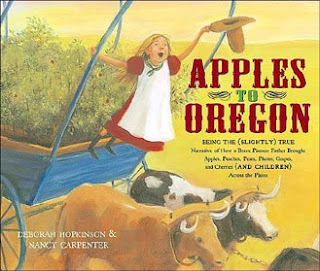 Apples to Oregon is a pioneering tall tale ripe with adventure and humor. Although its subtitle is long-winded, it explains the book’s premise precisely: “Being the (Slightly) True Narrative of How a Brave Pioneer Father Brought Apples, Peaches, Pears, Plums, Grapes, and Cherries (and Children) Across the Plains.”

Author Deborah Hopkinson bases her story on fact: “In 1847 a pioneer named Henderson Luelling . . . left Salem, Iowa, with his wife, Elizabeth, and eight children . . . and a wagon carrying seven hundred plants and young fruit trees.” The Luellings did indeed make it to Oregon and prosper along with their trees, but Hopkinson spices up their saga with larger-than-life drama narrated in the wonderful voice of one of the pioneer daughters, all of whom are named after apple varieties. Johnny Appleseed, watch out. 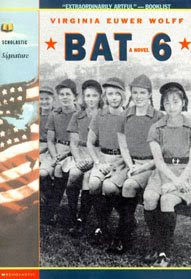 Bat 6 is the softball game played every year between the sixth-grade girls of Barlow and Bear Creek Ridge. All the girls have been waiting for their turn at Bat 6 since they could first toss a ball. This time there’s a newcomer on each team: Aki, at first base for the Ridgers, who just returned with her family from a place she’s too embarrassed to talk about; and Shazam, center field for Barlow, who’s been shunted around by her mother since her father was killed on December 7, 1941. The two girls are on a collision course that explodes on the morning of Bat 6. 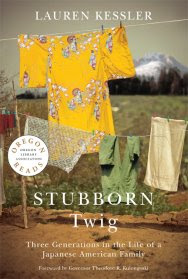 Stubborn Twig is the factual account of three generations of a Japanese-American family living in the Pacific Northwest. It begins in 1903, when Masuo Yasui arrived in Hood River, Oregon, to seek his fortune. This part of the story is similar to other immigrants’ tales-years of hard work, loneliness, and struggles with a new language and customs. The striking distinction appears around 1919, with the rise of anti-Japanese sentiment. Despite discrimination, his family continued to have great success. Their lives were painfully disrupted, however, on December 7, 1941 when Yasui was arrested as a spy and imprisoned for the rest of the war; his relatives were scattered and some were interned.

I would recommend each one of these books to anyone interested in learning more about the Oregon Trail and/or World War II.