We went up to the lake on Sunday to enjoy one of the last warm weekends of the season. It was quite windy so we weren’t daring enough to take the plunge, but the kids enjoyed looking for frogs, watching dragonflies, and building a castle and moat along the shoreline.

Inspired by Theresa at LaPaz Home Learning, I took several “Not Back to School Portraits”. It was a joy to watch the kiddos enjoy themselves and interact with one another. They discovered a tiny little green frog whom they played with for some time. 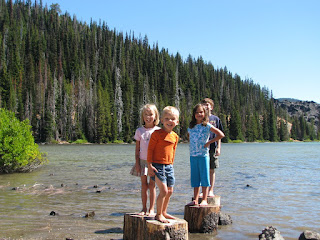 The following day, we sat down on the couch to do a little ‘current events’ work that I had saved. I save articles I think the kids will find interesting in the newspaper and try to do at least one ‘current events’ assignment each week. The article I saved was from the 25th of July, titled Beetles Killing Trees, Causing More Damage Than We See. The kids were delighted to learn that the article was about the forest that surrounded the lake we visited the day before. “That’s where we went yesterday!” If you look carefully at the photos above, you can see the trees that have succumbed to the pine beetle infestation. [Had only I thought to read the article before we went up to the lake – we could have talked with the Forest Ranger to learn more.] 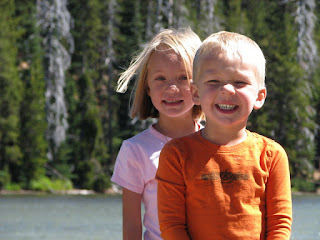 I read about two thirds of the article, stopping frequently to help them understand the larger vocabulary. We discussed the illustrations and photographs. Once Sweetie was comfortable, I asked her to give me an oral narration. Here is her response (note, the brackets indicate what I said to help her to elaborate or to correct miscues);

These beetles [Mountain Pine Beetles] are killing trees like Ponderosa and Lodgepole Pine near … Lake where we went yesterday. The beetles make tunnels in the new bark [inner bark] where they lay lots of eggs. Then the little larvae hatch out and they dig holes where they make a pupa. Then they dig out as a grown-up. The beetle also brings in some chemical [blue fungus] that gets on the bark and it changes blue. This kills the trees.

They [Forest Service] closed a road near … Lake because they don’t want the people to get hurted. They don’t want the [dead] trees falling down on people. [Do you recall what the foresters are doing to protect the trees?] Moving all the shrubs, sick trees and stuff to make the trees stronger. [… we discussed in more detail the process / purpose of thinning in more detail.]

When doing narrations, it is always interesting to me what details they focus on, in this case she provided the most details about the life-cycle of the beetle and how it affects the tree. We’ve always been fascinated with insects in our home (expect perhaps DH) – one of our first thematic units was on insects, in fact. So, it was no surprise that this part of the article was most interesting to her.

On the other hand, we haven’t talked much about forest ecology or how foresters work to protect the health of the forest. Her narration of this part of the article was thereby much more vague. By asking for a narration, I was able to pick up on that and we spent a few more minutes discussing the process of thinning. How it is done. How it helps the forest to be less susceptible to the pine beetle.

They now have a block of information on which to build upon during future trips to the mountain. They are better informed. The experience, coupled with reading and discussing the article, will help them better understand future lessons on ecology.

On a related note, when we had stopped by the Ranger Station to inquire about a good area to play in the water and relax on shore, I picked up a few brochures. One of which describes the need for Forest Guards; volunteers who spend a week or more at the forest station, providing assistance to the public and interpreting the ecology of the area. I asked the kiddos if they would be interested in doing something like that for a week and they were both enthusiastic. I’ll have to look into this again when the kids are older.

As the Ponderosa Pine is the dominant tree in our area, the kiddos are very familiar with its characteristics. Sweetie gives an oral presentation on the Ponderosa on our weekly nature walk pointing out ways to identify the tree and noting its adaptations for survival.