Any parent with little boys can attest to their fascination with all things related to transportation. My little man is no different. He has been drawn to planes, trains, ships, and automobiles since he was a toddler.  As he has grown older, his focus has evolved to include aerodynamics, electrical circuits, and of course, magnetic levitation (you can imagine his exuberance in Shanghai when he got to ride on the Maglev).  A little boy’s imagination knows no bounds. 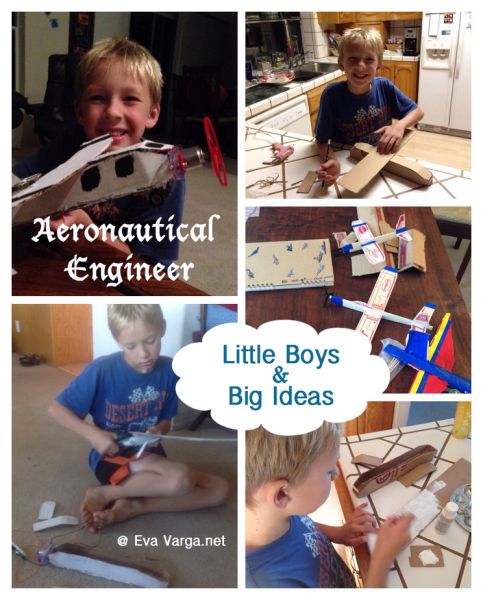 When something appeals to him, he latches on and with every waking moment is consumed with researching, role-playing, drawing sketches, and telling anyone willing to listen, all the facts he has learned.  To be honest, his obsessions are a little overwhelming for he tells you the same facts over and over, jumping from one airplane to the next, rattling off the specific airline make and model along with the engine size and maximum speed …  “We rode on a Boeing 747-400, United Airlines flight #889.  Each of the four engines has a maximum thrust of 63,300 pounds. It has a cruise speed of 565 mph and an altitude of 41,000 feet. It can carry about 400 passengers.”

This past week, he has been obsessed with airplanes.  His dad has a small collection of RC planes in our garage – his hangar if you will.  He used to fly them when the kids were toddlers but he’s developed other interests.  He had considered selling them – and did sell a few – but I encouraged him to keep a few knowing that when Buddy got older, it would be a hobby they could enjoy together.  That time has come.

He spent hours ogling one of the planes; running with it in his hands down the street in front of our house, feeling the wind ride over the airfoil and how it affected the lift. He then sat down and began to craft a plane of his own using a cardboard pizza box, electrical tape, Lego wheels, paint, a hot glue gun, and his Snap Circuits set.  I was mighty impressed with his ingenuity and raved about his design.  He was heart broken that it wouldn’t fly on its own.  He laments that he spent so much time on it and it didn’t work. I encouraged him to not give up, “Don’t be frustrated.  Each time you try, you learn.  Your design improves and you do better the next time.”  It is a hard lesson.  One I could never teach with any curriculum.  This one he needs to learn on his own.

He has never been a big reader of books – he is too active to sit still long enough to read more than a chapter at a time.  Yet he devourers audio books.  With each new story, he acts out his favorite scenes and really gets into play-acting, quoting passages and bringing the characters to life.  That reminds me – I really need to find a drama class for him.

Upon watching the new BBC program, Merlin, he has become intrigued by King Arthur and his knights.  While traveling in China, he carried along the Classic Starts edition of Howard Pyle’s “King Arthur and His Knights”.   He didn’t read much of it – but he was on a quest to find the perfect medieval sword at the tourist shops.  The sword he ended up purchasing featured dragons and Chinese characters so upon our return home, he was insistent that he still needed a proper knights sword. 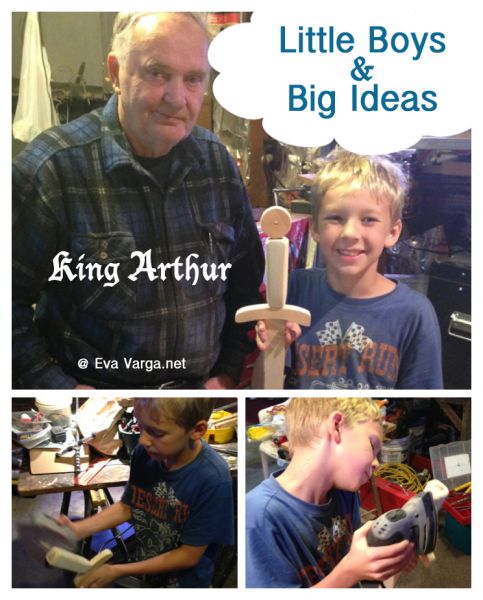 This past weekend, we drove up to see family and he was delighted to spend the entire day in the basement with Papa crafting a sword that he would be able to use in real sword play (it is made of wood).  He is also in the process of making his own chain mail.  He came across a wonderful tutorial on YouTube that utilizes soda pop can tabs.  We don’t buy soda (or beer for that matter), so it will take us a while to collect enough tabs to complete his costume.  With the help of Facebook and FreeCycle, we hope to finish in time for Halloween.

I love his passion, imagination, and excitement.  I didn’t actually realize his figures were accurate until I looked them up while writing this post.  Now, I sit here impressed and a little mystified as to where this child came from.  Somehow, his little piles of cardboard scraps and aluminum foil, electrical wires, and duct tape don’t see so frustrating anymore.  I am blessed.