Last year, we took part in a fun online geography activity called Journey North Mystery Class.  We didn’t see the project through to completion as we ran into complications of a busy schedule and fell behind.  We thereby vowed to do it again in 2011.

When I saw Alex’s post a few weeks back, Journey North Mystery Class – First Two Weeks, my mind jumped and I shouted out to MeiLi, “Ah!  We almost missed it!  We are two weeks behind, do you still want to do it or should we wait until next year?”  She insisted we proceed forth. “We can catch up no problem,” she said.  Well one thing after another and I kept forgetting to make copies of the data sheets and the graphs for each of the 11 locations.  Bringing us to today … now 4 weeks behind … when she reminds me, “Mom! When are we going to do the Mystery Class stuff?  We have the copies now.”

“Oh!  Right!  Let’s do it now!” … and off we went to the computer to look up the sunrise / sunset data and begin our graphs. 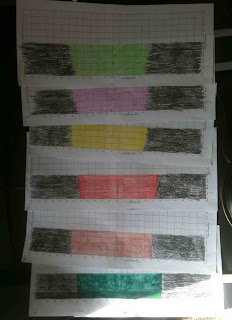 One of the things we learned from our previous experience is that we should have a different graph for each location as opposed to a single graph with different colors lines representing each.  It was just too confusing as you can see in our post from last year.  Another lesson learned was rather than create a line graph, we created blocks of color to create a more visual distinction between night and day at each location.  Thank you, Alex! 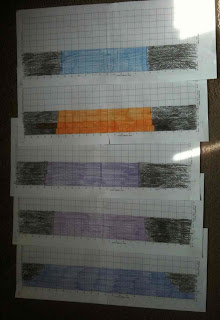 We utilized the sunrise / sunset data for the preceding four weeks to first bring our graphs up to date.  In retrospect, it is actually kind of nice starting a little late as we were able to compare our graphs with others to assure we were on the right track.  Our 11 graphs, showing the first 4 weeks of data, are shown above.   Using these, MeiLi separated the graphs into two piles, those with locations where the days were getting longer and those with locations where the days were getting shorter.

When this was completed, we then went through the additional clues and weekly updates on the Journey North website.  The picture clue provided for week 2 really jumped us ahead in our comprehension.  MeiLi immediately guessed that the location of the photo was in Brazil.  Knowing the photo period for Macapá, Brazil, she knew what the photo period would be on the equator.  She then realized that by using the photo periods for one specific day, she could organize all the mystery class locations as well as our home location in relation to the equator.

The top photo above shows the northern hemispheres organized by latitude .. our home location being the farthest north.  The bottom photo shows the southern hemispheres.  Essentially, the photo periods create an hour-glass shape when stacked atop one another in this way.