At archery class last week, we moved the hay bales (targets) and to our delight discovered a small group of millipedes who had taken up residence beneath the bales.  Sweetie was quick to make friends and Buddy followed suit behind her.  It gave us a chuckle when we discovered that their instructor, a young many in his late teens/early twenties was too apprehensive to hold one himself. 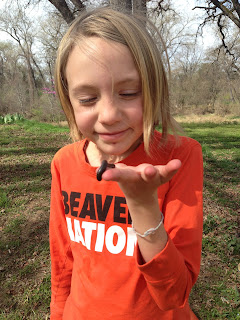 Millipedes have two pairs of legs on each body segment and are thus sometimes called “1000 legged”.  They have a rounded body and head from which short antennae can be observed.  They vary in length and color.  Most millipedes are herbivores and are found under decaying logs, stones, and leaf litter in moist soils.  They perform a beneficial service to the environment, shredding plant material that has fallen to the ground creating more food for fungi, bacteria, and other small organisms.  Though they have a hard exoskeleton for protection, they will also curl up into a coil when threatened and sometimes secrete a yellowish liquid to deter predators. 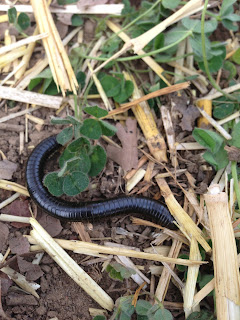 Though they seem unpleasant to some people they are not dangerous.  They do not bite and they perform a valuable service for humans, eating decaying plants and returning the organic matter to the soil.  Because they live in burrows beneath the ground and below decaying logs and leaf litter, they do not use their eyes and prefer dark spaces.  Some scientists believe they may be blind for they will tap the ground as they move forward, much like a blind person will use a cane.  Though their hard exoskeleton provides some protection against predators, they will curl up into a ball when threatened and sometimes secrete a yellowish liquid that can be harmful to some small predators (harmless to humans). 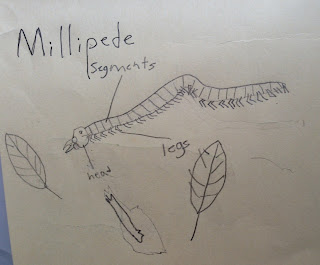 We have seen these fun critters a few times at the High Desert Museum and at a friend’s house when we lived in Central Oregon.  This was the first time we had come across them in the wild ourselves.  They brought smiles to our faces and provided a great opportunity to journal the discovery.