For many regions of California, 2013 ended as the driest year in recorded history. That trend has continued into 2014, prompting Gov. Jerry Brown to declare a drought state of emergency in January of this year. Though rains have begun to fall and storms have threatened some regions with flooding due to the lack of vegetation after recent fires, officials are clear that the precipitation will do little to offset the years of drought. 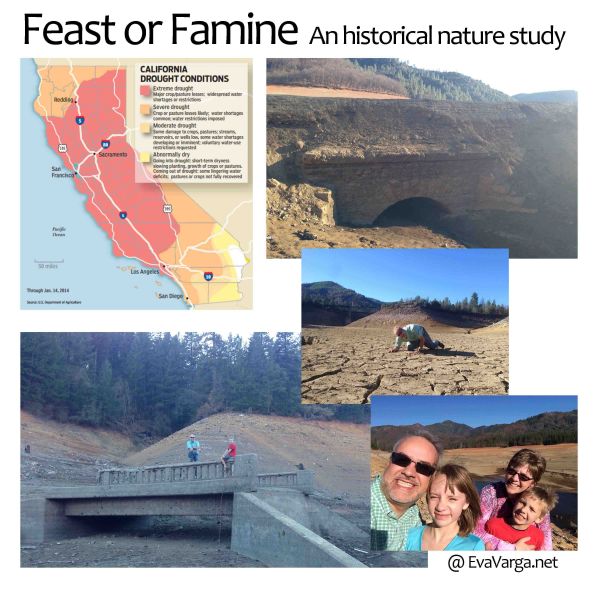 Inspired to see the effects of the drought, we took a drive a few weeks ago up to Lakeview along the shore of Lake Shasta in Northern California. On this walk, we looked for signs of the weather’s effect in nature and especially for the effects on food, water, and shelter for animals.

We also observed evidence that man has changed the environment. The construction of Shasta Dam in the 1940s created a 4.5 million acre‐foot reservoir, the largest in the state. The dam captures water from three rivers (the upper Sacramento, McCloud, and Pit). As a result of the dam construction, abandoned towns, roads, and railways ended up under water.

The extremely low water level at Shasta Lake has revealed this part of the state’s history.  Today’s low water level is revealing some interesting things from that bygone era – like the old railroad lines that used to run through the area. Tunnels and train trestles that are normally under about 100 feet of water are now visible.

We enjoyed walking around the lake bed. As we did so, we marveled at the normally hidden engineering projects. The sediment was so soft, we were able to observe animals tracks and small vegetation taking root.

Feast or Famine? is one of many suggested nature study outings in Creative Nature Walks, a fun, new book by Cindy West.  For families new to nature study, Creative Nature Walks is a great way to begin a weekly outing with your family.  She provides more than 100 exciting nature walks ideas that are sure to get you out the door in minutes and grow your family’s love for nature. For experienced families like us, her ideas provided a new spark; a little twist on our usual routine.  I love that!

1 comment on “Feast or Famine: A Peak in the Past”