A week ago, we had an opportunity to spend a few days with my dad in Bandon.  Though my childhood home was rented for many years, my father now resides here once again.  We visit as often as we can and try to stay for a few nights at least once a year.  It is always a special time.

On Saturday morning after breakfast, we ventured out onto the mudflats across the street from the house.  We were careful this time around to don old tennis shoes for the occasion.  We headed out at the peak of low tide, but had neglected to check the tidal height.

We thereby discovered, once we were underway, that the tide wasn’t particularly low.  We wouldn’t thereby have as much time for agate collecting as we had anticipated. 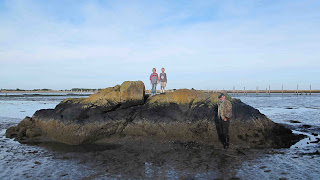 The rock in the mudflats where my brothers and I spent many hours role-playing our favorite stories.

Crossing the mudflats, we observed many signs that wildlife had been here prior to us.  At least two are visible here: one mammal species and one bird. 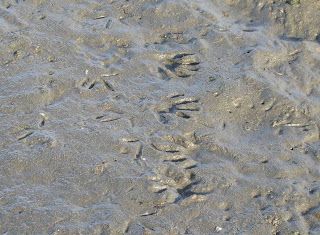 While I was distracted with my camera … everyone kept moving along.  Anxious to get to the sandy beach where the agates collected and due to the location, rarely seen by human eyes. 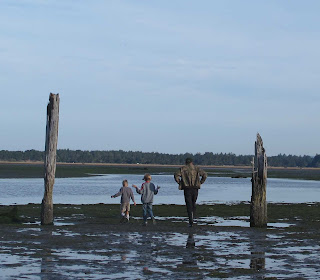 Upon crossing the creek, we were then able to step up onto the salt marsh.

We observed an abundance of driftwood, pickle weed (Salicornia), and sea lettuce (Ulva).  We didn’t spend much time here this time as the tides were against us, however, we did manage to see evidence that a meal had been enjoyed here – at least by one resident. 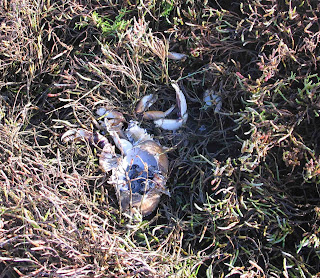 As we came up over the berm, sadly there is some European beach grass (Ammophila arenaria) here too. We discovered that the beach was amass with Harbor Seals (Phoca vitulina) basking in the sun. We tried not to disturb them, but with a 6 year old rambunctious boy, that is near impossible.  The seals thereby made a mad dash for the water as soon as they realized we were there. 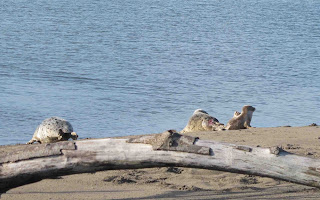 Harbor Seals sunbathing on the beach … at least until we arrived.

We walked along the sandy beach in search of agates … collecting our favorites and investigating other objects of interest.  All the while, the seals observed us from afar, likely wondering when we were planning to leave.  A small group of seals, even followed us along the shoreline for some distance, snorting on occasion, clearly disgusted with our presence. 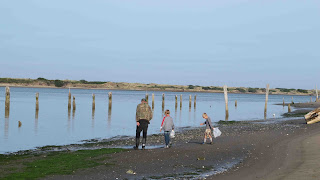 Agate hunting on the sandy beach

We observed numerous tracks along the sandy beach as well .. though different than those we’d seen on the mudflats. 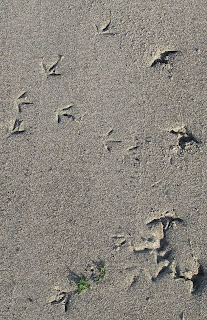 It was a beautiful morning with very little wind.  We would have liked to have stayed longer, but we knew the tide threatened to trap us on the island or force us to swim so we headed back after about 40 minutes.  We walked back the same way we had come and thereby came to the section of the beach where the three seals I had photographed had been relaxing. 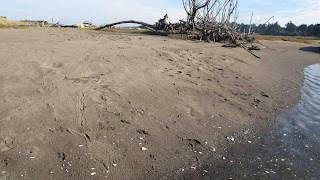 We quickly crossed the mudflats and then continued to trudge across the mudflats.  We observed the remnants of another Dungeness crab (Metacarcinus magister) meal, now becoming a little jealous.  We would have liked to go crabbing too, but we just didn’t have the time. 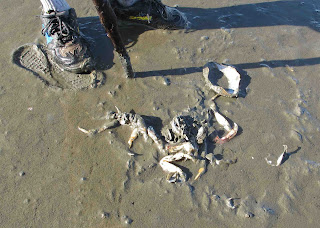 We were indeed fortunate to have headed back when we did.  On the way out, the creek depth had reached only to my knees.  On the return, however, it was up to my waist.  My dad helped the two little ones cross at the deepest point.  My little guy was quite concerned with the incoming tide.  Though he is a strong swimmer for his age, I actually began to worry he might not be able to swim if the need arose, due to panic. 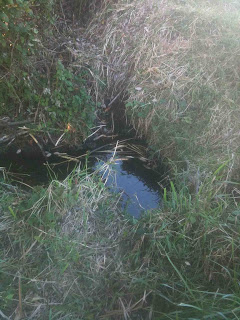 Each evening, at dusk, we also trekked across the road to take a peak at the beaver (Castor canadensis) who has recently taken up residence in a culvert on Dad’s property. Sadly, he was always too quick for us and we never observed him in person … only evidence of his presence.  Dad has seen him frequently, so we know he’s there.  Each time we tried to sneak up on him .. he’d duck away and into the culvert under the road.  The water would undulate back and forth in smooth waves as proof he had been there only a moment before. 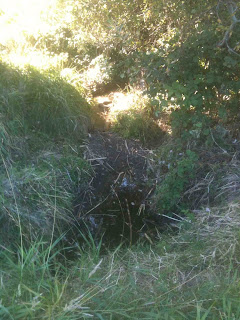 The picture above shows the trail that he has formed as he travels back and forth through the forest to the mudflats just on the other side of these trees.

It was a great excursion and one we look forward to repeating again. Buddy has a different opinion, however. 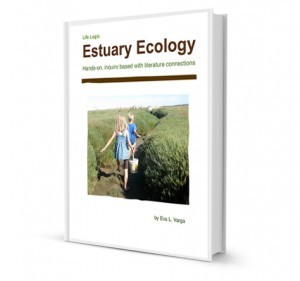 Immerse yourselves in a field study of the estuary and its distinct habitats with my Estuary Ecology curriculum available in my store.