Many of you will be interested in knowing that between July 20 and July 28, in backyards, woods, and fields around the world, citizen scientists will be setting up white sheets and lights for the second annual National Moth Week.   This global science project began a year ago to encourage the public to observe and document one of nature’s most diverse creatures. Through partnerships with major online biological data depositories, National Moth Week participants can help map moth distribution and provide needed information on other life history aspects around the globe.  If you are participating in my Introductory Entomology online course, this is the perfect opportunity for you to engage in meaningful, hands-on science. 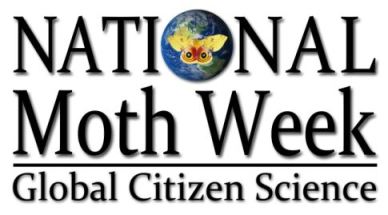 You don’t have to identify your moths–they have experts that will help–but it would certainly be a great learning opportunity to try.  I challenge you to try your hand at identification–at least to the family level.  The photo you upload with your observations lets a specialist confirm ID.  The information gathered through citizen science projects like this is used to compile species checklists and distribution maps. The data, over time, becomes an invaluable record of species distribution. Science at its best!

Host a Moth Night of Your Own

So invite a few friends and contribute to this awesome project by hosting a moth night of your own.  What happens at a moth night? Basically, you put up a sheet and a light with a bunch of your friends, and sit around and wait for moths.  How simple is that?  And it is so much fun!

Science and Service Learning have long been seamlessly intertwined in my life since I started teaching full-time.  Though I am no longer in a formal classroom, the two share an even larger part of my life.  Hands-on, real-life science comes naturally to me.  It is a major component of our daily living and learning.  We seek out opportunities to put our skills to work and to learn about the world around us in a natural way.  This is Unschooling at its finest. 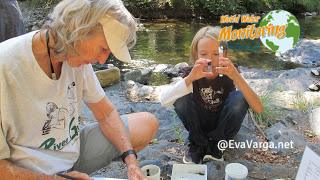 Our Roots & Shoots group has been taking part in a great service learning opportunity called the World Water Monitoring Project for the past few years.  The international education and outreach program builds awareness and involvement in protecting water resources around the world by engaging citizens in basic monitoring of local water bodies.
Upon learning how to collect water quality data with our group, the kiddos asked if we could purchase our own.  The cost of a Basic Kit (shipped to any location in the US) is just $13 plus shipping. At this price – I couldn’t pass it up!  We now carry the kit with us on all our nature outings and it has provided us the necessary tools to engage in meaningful, hands-on science.  I supplement the kit with other tools that I have used for years – including a Kestrel 3000 Pocket Wind Meter

– a handheld weather-monitoring device that provides a wide range of functions. 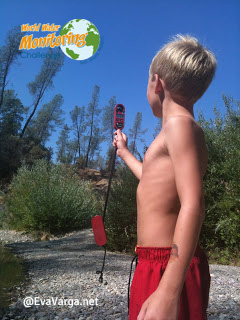 We also make every effort to identify the little critters we capture in our nets.  Sometimes this is easier said than done, but dichotomous keys are helpful and we carry a few laminated ones with us.  We record our findings in a Rite In The Rain Journal

.  When we return home, we upload our data to the  World Water Monitoring Project and if we’ve spotted critters, we upload images to Project Noah.

Our outings are more meaningful when we know that our data will be used to help the scientific community better understand our world. 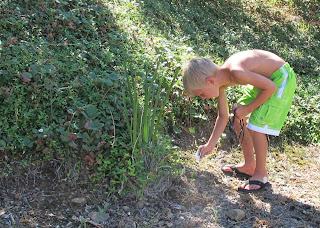 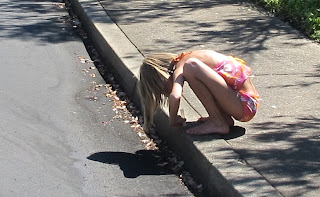 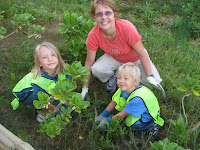 Ever since the kiddos and I participated in the Let’s Pull Together Community Weed Pull in June they have been asking, “When can we do the weed pull again?” When DH hears them he always replies, “Right now! There are weeds that need pulling in our backyard!” The kiddos do that regularly in the warmer months but it isn’t the same as working together with others to make a difference for the environment.When we decided to spend 2 weeks in Maui, I started a quest to find as many educational opportunities as I could. The Pacific Whale Foundation is a phenomenal resource and with a variety of activities for all ages. One of the links I explored was their Volunteer on Vacation site which provides listings of all the projects that we can take advantage of while on vacation. 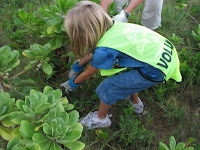 There were several that were of interest but we settled on the Hoaloha ‘aina Weed Pull on the Monday before we departed. We met the team at the Kamaole II Beach Park in Kihei and were provided volunteer vests (they didn’t have enough for everyone so I opted to not wear one). There were two distinct areas to choose from… one on shore that involved using power tools to remove an invasive woody shrub that had taken over the bluff.

We opted for the other area… one uphill from the adults in an area that had been roped off and thereby kept Buddy contained within a manageable area.We worked for two hours pulling invasive weeds. In doing so, we of corse encountered many insects. We took a few minutes to observe them closely but unfortunately I didn’t have the camera so no pictures. DH took these photos shortly after we got started – he thereafter departed to do some work at the condo – Yes! He worked on vacation! 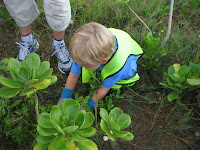 Just as everyone was finishing up, an adult discovered the nest of a young Wedge-tail Shearwater (ua’u kani). It was presummed that all of the fledglings had left for open water by this time. We all got a chance to observe the fledgling closely before returning him to his nest, recovering it with vegetation, and closing off the area again. Admin note: Please follow this link – it is a very interesting bird! 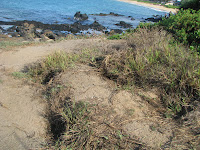 When DH returned, we immediately took him over to the area where the nesting burrows are located and told him of our discoveries. The kids were delighted. The next day, we received our Volunteering on Vacation t-shirts as a thank you from the Pacific Whale Foundation. The smallest size is an adult small – so of course, they are huge on the petite 6 year old and a 3 year old – but the are so proud of their shirts!