Participants are underway with their long-term projects – either a traditional mounted insect collection or a collection of insect photographs – as a part of the Online Entomology Course I am teaching this month.  While I have always been interested in insects, I first began insect collecting when I was hired as the elementary science specialist in North Bend.  The fifth graders were required to undertake an insect project and I thereby spent the summer immersing myself in insect lore.  I became so immersed in the hobby that I continued through the school year and consecutive summers.  My students began to call me the Bug Lady.

Insect collecting does not require a lot of tools or equipment.  Some collectors prefer to collect only specimens they happen upon that have died.  Other collectors take the traditional route, collecting live insects that they preserve carefully.

Live insects can be caught with the aid of a net, jar, or by hand. Be careful of those that bite or sting!  Insects can then be preserved by:

To mount the insect, put a straight pin through the thorax. Very small insects should be glued to a small triangular piece of paper and then a pin can be put through the center of the paper.

Stick the pin into a display such as a piece of cardboard or Styrofoam. Display your collection in a frame and consider hanging it on the wall.  Use your imagination!  Using insects in art is a growing art medium, see my earlier post Tiny Footprints, to enjoy the incredible artistry of Pamela Cole.

If you’d rather not do a traditional mount style collection, consider one of the following options.

For more information on insect collecting, you may be interested in my HubPage, Bug Collecting.  You’ll find detailed information about how to set up a terrarium for insects and well as how to get started with scientific illustration and nature journaling.

The Introductory Entomology Course is well underway. Tomorrow, the newsletter for Week #3 will be emailed to all of you who have subscribed and indicated your interest in the course.  There are many families taking part and I would love to see the participants artwork and hear what the children have enjoyed most.   A few examples from Week #1 – Insect Symmetry & Insects in Art – are shown here. 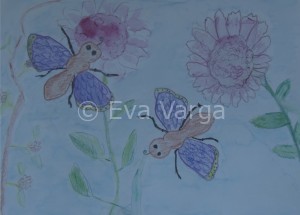 A few families have signed up to share their work with one another on our Flickr group and I encourage those who have not yet done so hop over there.  I know the kids would love to read the comments the others leave for their Insects in Art work and I know you’ll come away feeling inspired. 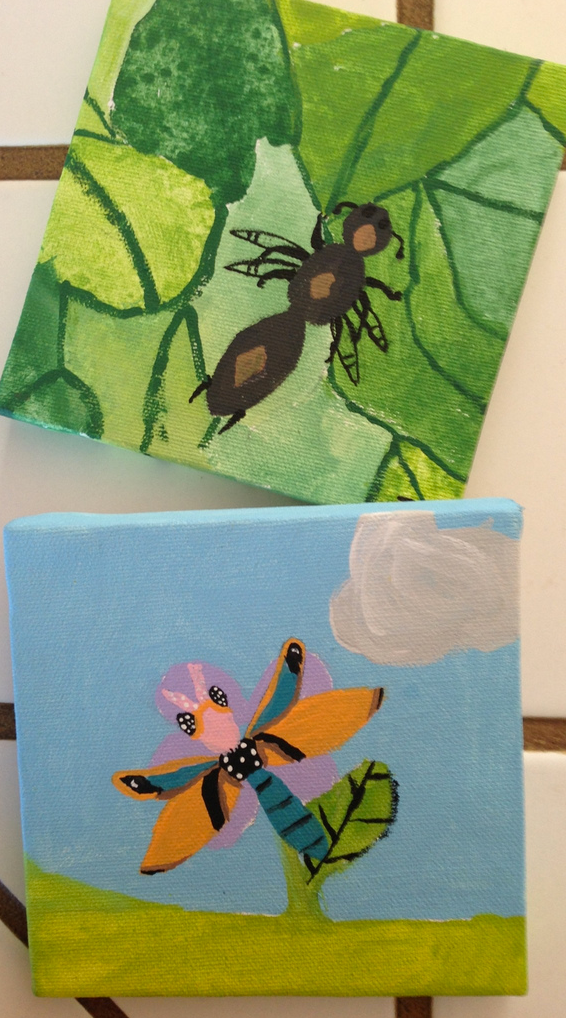 In addition to the lessons I outline each week, some students are working on independent research projects according to their interests. Some students are focusing on specific insects and are creating a poster to share what they have learned. Other students are exploring insect anatomy and adaptations more closely.  Another student is investigating the hobby of apiculture or beekeeping. Regardless of the chosen topic, I want to encourage everyone to share with us what you have learned. You can do so by emailing a link to your blog or YouTube video, uploading your work to our Flickr group, or sending me an email attachment.  Whatever works best for you. 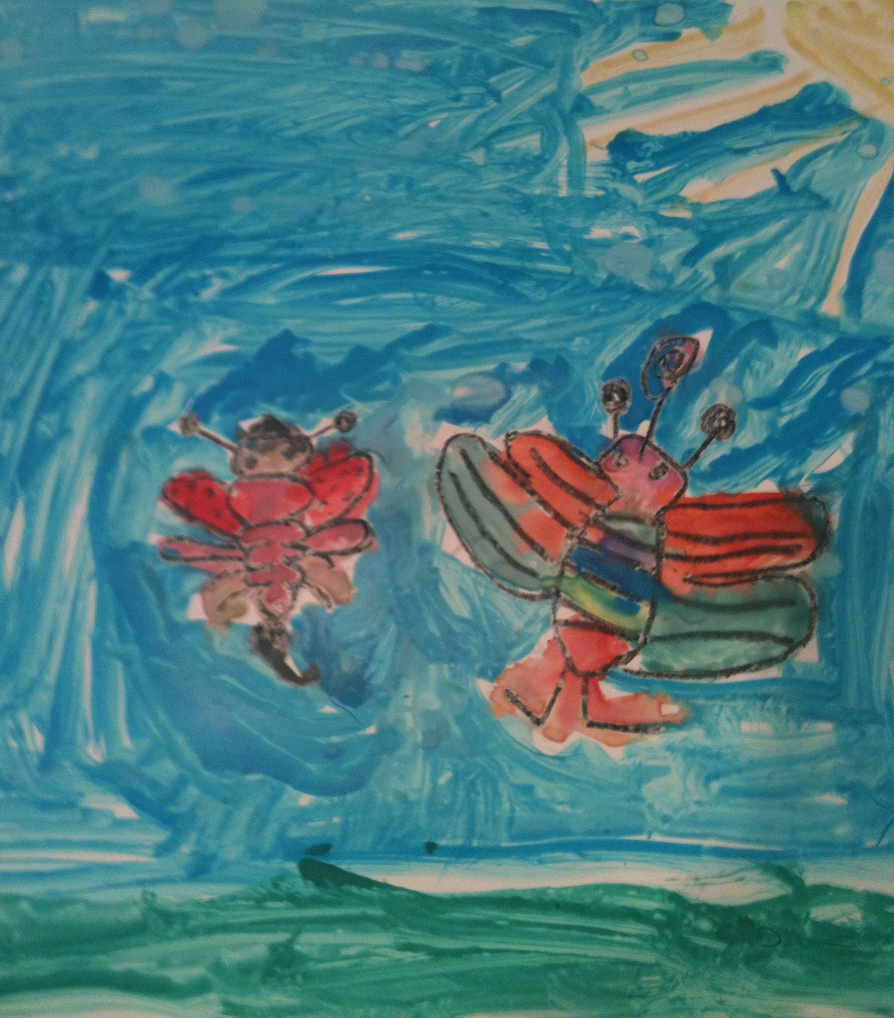 Remember, the course is self-directed.  Participants work through the material at their own pace, completing the projects and lessons when it bests suits their schedule.  There is no obligation and you may join in at any time simply by subscribing to the newsletter and indicating your interest in the Introductory Entomology Course.

We are fascinated by insects and love art – please share your favorite art that features insects by leaving a link in the comment section.  🙂

In preparation for the online Introductory Entomology course I am teaching in May, I thought you all might like a little peak into the activities we will be covering.  The online class integrates many entomology topics including insect classification for kids, an integrated pest management simulation activity, and hands-on, inquiry based projects.  Access to the YouTube videos, Flickr group, Google Docs, andProject Noah classroom will be made available to those that register.  Subscribe to our newsletter here – be sure to select the topics of most interest to you.  In the future, you can always find the Mail Chimp subscription form in the upper right corner of the sidebar.  In addition to the materials listed for each week, students should have a notebook or binder in which they can take notes, keep their work, and record their observations. 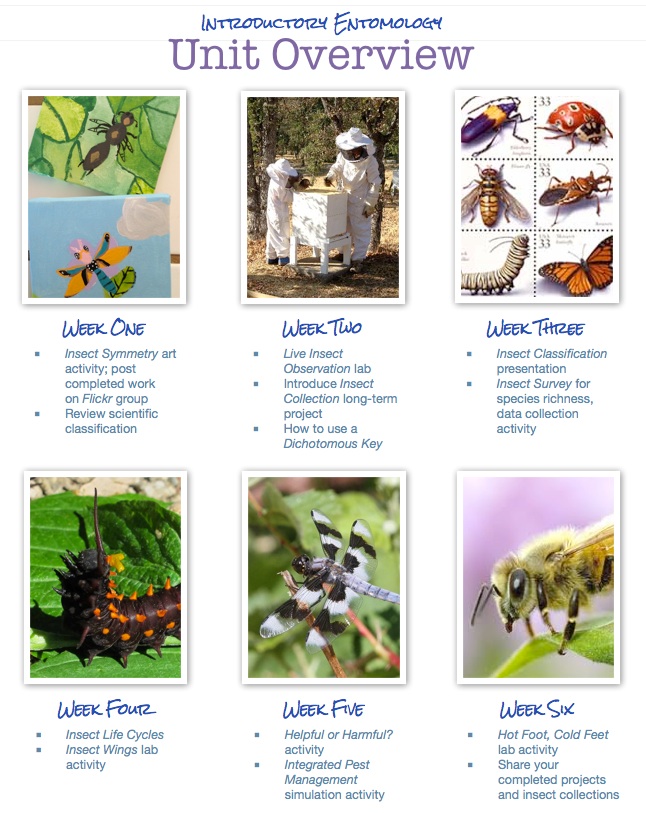 If you should have any questions about the course, please do not hesitate to contact me.  Remember this is an online, self-directed workshop.  Participants will work through the assignments and lessons at their own pace when it is convenient to his/her schedule.

When I was teaching in the public school, my favorite unit to teach was entomology.  Now that I homeschool, I have come to realize how much I miss teaching others and exploring our natural world together.  While my children and I actively engage in nature studies regularly, we have not been very consistent in incorporating more in-depth science studies into our curriculum.   I have discovered that I am more accountable when I provide opportunities to our fellow homeschooling community.  For this reason, I have decided to open this course to anyone interested in learning about insects along with us.

I have designed this unit so students will develop an appreciation for the diversity of insects in their local area as well as an understanding of the greater diversity the world over.  Participants will have the opportunity to use an identification or dichotomous key.  The course is open to all ages but the content is geared towards middle level students – parents and families are welcome to join in on the fun.  Any prior knowledge about insects is appreciated but not required. 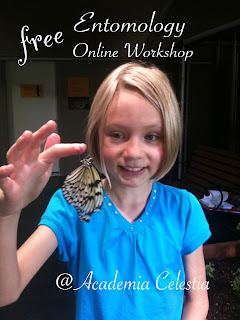 The unit includes several labs and research assignments in addition to a long-term project. I will communicate weekly whereby I share videos and other media showcasing specific lessons and activities designed to teach insect anatomy, scientific classification, ecology, and inquiry.  I will also provide research suggestions, resources for study, and experiment ideas.

Participants will have the opportunity to participate in class discussions, contribute to data collection as citizen scientists, and do independent research on topics of interest.  Participants in the course are expected to keep a field journal or notebook of their work. Participants are also encouraged to come up with their own project ideas (videos, PowerPoints, art projects, field trips, photography, and more).

This free course will be six weeks in length and is scheduled to begin in May. For those interested in taking part, I ask that you subscribe to the Entomology Online Workshop newsletter via MailChimp.  You can find the subscription link in the right sidebar.  Upon receiving the verification email, you’ll want to click on “manage your preferences” and choose the list topics of interest to you; Entomology Online Workshop is listed as one option. I will then provide the necessary weblinks and/or pass codes required to access the course materials (via GoogleDocs, Flickr, and Project Noah) when the course begins next month. 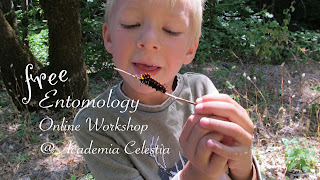 Participants will have the opportunity to share documents via GoogleDocs, write blog posts (optional), and submit photographs of student work via Flickr.  Participants are also encouraged to collaborate with one another via my classroom on Project Noah.  Parents are expected to partner with younger children to read over and edit student presentations, checking for grammatical errors. Students working independently are asked to use spelling and grammar checks before submitting work.

Each family or student that will be making home videos (strongly recommended) about class projects and activities should have a family or individual YouTube account. You can either use an already established account or start a new one for the class. Students wanting their own account must be 13 years old. Any videos made for class can then be uploaded to YouTube and the link given to me. Families are responsible for setting up desired privacy settings.