My name is Eva Varga and together with my husband and two young children, we recently enjoyed staying at three of your hotels during our family holiday in China (Marriott Hotel City Wall in Beijing, Courtyard Xujiahui in Shanghai, and the Renaissance Harbour View in Hong Kong).  We love the Marriott brand and as reward members, we have enjoyed our stay at many other locations around the world.

Our thoughts on the environment & sustainability

While staying in Beijing, we enjoyed watching a short documentary on Marriott’s efforts to contribute to the local economy and sustainable agriculture.  The focus of the piece was on apiculture in China and it was of particular interest to us as we hope to someday have hives of our own.  While I was personally interested in the story, I was most delighted to hear of Marriott’s interest in sustainability and the local communities in which it serves. 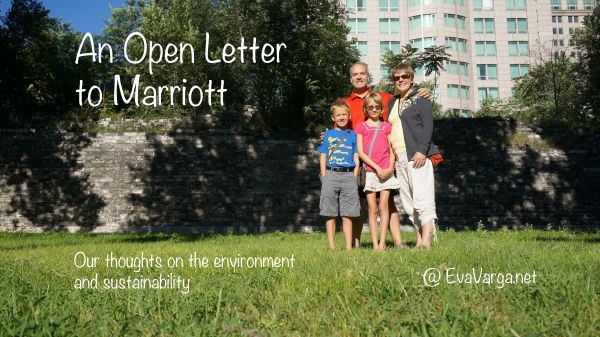 As many travelers are aware, it is unsafe to drink tap water in China and it is advised to purchase bottled water.  While I appreciated that Marriott provided bottled water to its guests, I was saddened when I thought about the quantity of plastic that is consumed as a result.  The impact of our consumption of plastic alone is concerning enough, but what really struck me was that the water provided was bottled by Nestlé.

It struck me as odd that Marriott – a company that markets itself as one dedicated to the environment – would choose to partner with a company like Nestlé, whose CEO has stated that drinking water is not a human right, but a privilege.  The atrocities committed by Nestlé are not limited to drinking water, however. Large multinational beverage companies are often given water-well privileges (and even tax breaks) over citizens because they create jobs, which is apparently more important to the local governments than water rights to other taxpaying citizens. It is bad enough that they are depleting our natural resources of water, but they also promote GM/GMO foods, investing money to thwart labeling of such products.

In the 1970s, Nestlé was accused of getting third world mothers hooked on formula, which is less healthy and more expensive than breast milk.  To save money, mothers diluted the formula with water, often with contaminated water, thus preventing their child from absorbing the necessary nutrients. As a result, millions of babies died from malnutrition.  Poor labeling, mostly due to poor literacy rates, was also a contributing factor.  The allegations led to hearings in the Senate and the World Health Organization, resulting in a new set of marketing rules.

Considering the negative press and global reputation of Nestlé, I strongly urge Marriott to reconsider using Nestlé products.  While the need to provide safe drinking water is important, I hope Marriott will seek out alternatives.  Perhaps installing purifiers in each room or providing a reusable (aluminum) water bottle filling station on each floor.