We bid summer adieu once again with our third annual Summer Art Camp this week. I’ve seemingly exhausted my repertoire of ooey gooey messy art activities so this year we brought camp to our home (rather than the neighborhood park).

You can read about our first art camp here, I sadly didn’t blog about our second year of art camp, however.

I gathered everyone on the carpet for introductions and in doing so also explained my expectations for their behavior: no running around … we are here to explore our creativity in art, not to play – though there would be time for a little of that – but I expected everyone to give 110% and not rush through the projects. Setting the stage early proved to be worthwhile … everyone behaved beautifully and their artwork was excellent!

The first activity we did was to create traditional medal-backed buttons with the words “Third Annual Summer Art Camp 2010 :: Bidding Summer Adieu” around the perimeter. It was a great little ice-breaker and provided a nice souvenir to celebrate. In years past, we’ve created T-shirts but I thought these were more memorable and could be saved like race medals. We then moved on to Zentangles which were indeed a hit with both the kids and adults. Creating Zentangles is one of my favorite art activities and provides for an easy way to entertain busy bodies at the doctors office, in the car, or on the airplane.  On a white board, I provided a sampling of patterns that could be repeated within the subdivided areas of their canvas (simply a square piece of cardstock). [Admin Note :: The website encourages artists to purchase their starter kit but we simply used permanent markers (Pigma Micron pens work best) and standard cardstock.] 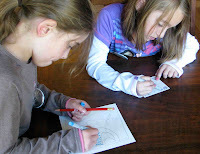 I was impressed that everyone really took their time to see their project through to the finish.  Some choice to use a single color while others chose to use many colors.  Interestingly, this was the one and only project that inspired the moms to give it a go as well.  I was delighted that I was able to introduce them to a new art form … but I must give thanks to my friend Kristin, who first introduced me to Zentangles earlier this year.  🙂

We concluded the first day planning for our Alfombras or carpet mosaics.  I first learned about Alfombras from a Honduran friend of mine and as we studied Central America earlier this year in Passports Club … I knew I wanted to give this a try.  When I was planning this activity, I didn’t really know how to proceed.  My father has a small sawmill and I was able to obtain a large quantity of sawdust which I then dyed with RIT clothing dye (we used just 4 colors:  red, blue, green and orange). 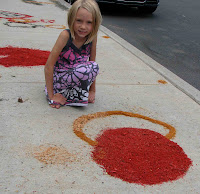 The kids were then encouraged to plan our their design on newsprint in advance.  I showed them numerous images of Semana Santa Alfombras in Central America … pointing out details of the mosaic style and repeated patterns.  Suffice it to say, the kids ventured in their own direction putting their own spin on the idea.  Many created images of what they were interested in … MeiLi created a planet, Buddy created a mosaic of our recent trip to Todd Lake, a couple of the girls created hearts, flowers, and ladybugs.  The boys were more ecclectic … a rocket ship, Crater Lake, and another boy took the word alfombras literally and created a small ‘carpet’. 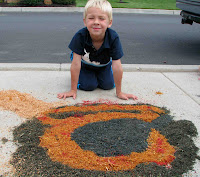 I had assigned each of the kids a full square on the sidewalk in hopes they would fill up the entire square with their design but like most children’s art, they created a small picture leaving a lot of ‘open space’.   It is difficult to encourage them to use the entire canvas.  I suppose we need a lesson specifically on this!

I discovered this website as I was typing this up .. I didn’t realize until too late that pine needles are frequently placed down first and that other media (flowers, vegetables, etc.) are also used.  We’re definitely going to give this another try.

Other more traditional art activities included watercolors and chalk pastels.  Again I was impressed with their creativity and work.  Our two days of art camp have always been a highlight of our school year (and indeed it is one of the things we do to kick off the new academic year).  This year was particularly enjoyable, however.  The kids are getting older and more can be expected of them.  I set high expectations and they rose to the occasion. 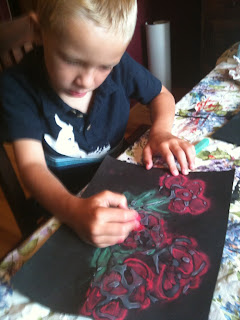