This past week, I shared with you our discoveries while we were in the Galápagos in a five-day series titled, The Islands of the Galápagos. Today, I would like to share with you the wildlife of the Galapagos archipelago, while also showcasing the life zones and ecology of the islands. 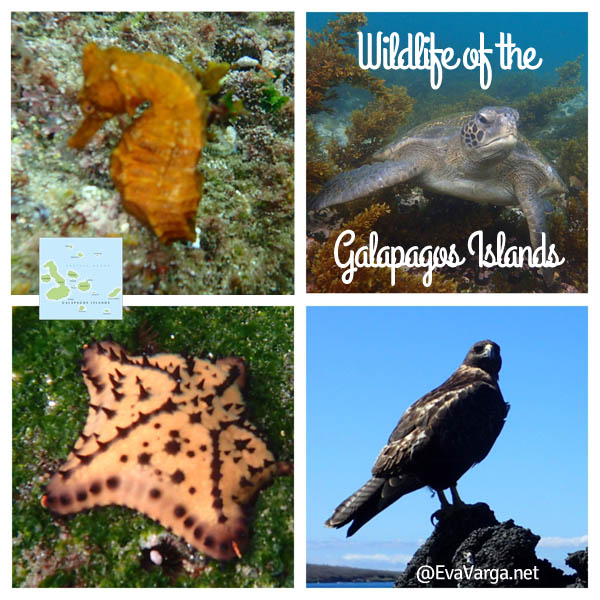 Visitors to the islands notice that there are few species on the Galápagos archipelago. The geology of the islands, with the constant volcanic activity, creates a harsh, desert climate with very little rain and high temperatures so that only the higher slopes of the larger islands have enough rain to nourish a luxuriant growth of plants.

This, in turn, results in an environment that is very hostile for most animals that are found on the continent. Most of the islands are low and what little rain they get comes during a short rainy season, with the rest of the year being very dry. The amount of rain varies from one year to the next.

“The natural history of these islands is eminently curious, and well deserves attention… Considering the small size of these islands, we feel the more astonished at the number of their aboriginal beings, and at their confined range…Hence, both in space and time, we seem to be brought somewhat near to that great fact–that mystery of mysteries–the first appearance of new beings on this earth.”  ~ Charles Darwin, The Voyage of the Beagle

“Eminently curious” well describes the natural history of the Galápagos, from its sere landscapes to its comical birdlife. For over 400 years this volcanic archipelago has both puzzled and stunned its visitors, and no aspect of the islands is as stunning as its wildlife. The ease of approach to the birds, iguanas, tortoises and other creatures of the Galápagos is due to their isolation from natural predators, a condition that first stirred Charles Darwin in 1835.

Eco-zones of the Galápagos

There are a total of seven zones within the archipelago housing a variety of plant life. Varying amounts of rainfall with altitude, and from island to island, have led to the formation of vegetation zones ranging from desert to lush cloud-forest.

Various plants and animals have adapted over the years to the conditions of the islands and in some cases the condition of the zone. Plantlife (or flora) is normally found in a specific zone and the animal life (fauna) dependent on those plants can be found in the same zone. 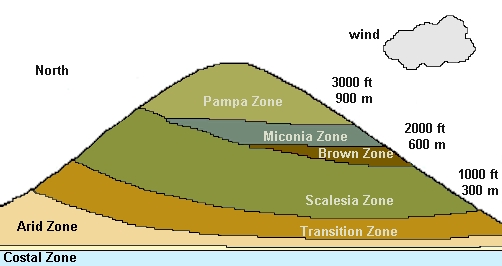 The lowest life zone on the island is the coastal zone. Those plants here can be divided into the Wet Coastal Zone (or Mangrove Zone) and the Dry Coastal Zone (beaches and high tide areas). Saltbush is found near most shores, where it forms a dense low shrubby tangle.

Mangroves are salt-tolerant trees and shrubs that thrive in shallow and muddy saltwater or brackish waters. In the Galápagos there are 4 varieties of Mangroves including the Black Mangrove, White Mangrove, Red Mangrove, and Button Mangrove.

Here most of our walks in the Galápagos took place — with the scuttle of the bright orange Sally lightfoot crabs underfoot, beneath the gaze and snort of the marine iguanas, to the barking of sea lions and the crashing of the surf off the shore. This is the environment we will remember when we look back on our time spent in the Galápagos.

As an island slopes from the beach to an elevation of about 197 ft (60 m) elevation an arid desert like zone occurs. This region is home to the many Cacti that live in the Galápagos including the Prickly Pear Cactus, Lava Cactus, and Candelabra Cactus .

Vine plants also make their home here; the endemic lava morning glory and endemic passionflower can be found in this zone. At the top of the Arid Lowlands the silvery leafed Palo Santo Tree with its collection of lichens can be seen. 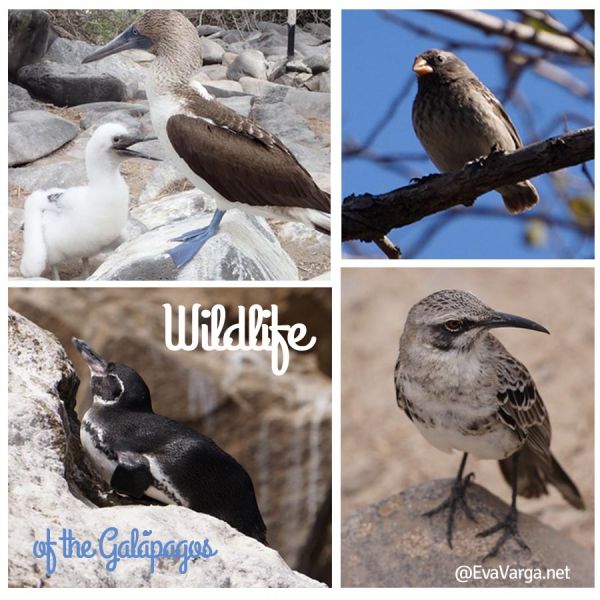 Rising up the island, plants become more frequent. In the Transition Zone plants from both the Arid Lowlands and the Upper Moist Zones occur. This zone is home to a variety of small trees or shrubs including the endemic Pega Pega Tree and the endemic Guaybillo, which produces a small white flower that develops into a fruit similar to its cousin the Guava.

“The distribution of the tenants of this archipelago would not be nearly so wonderful, if, for instance, one island had a mocking-thrush, and a second island some other quite distinct genus…. But it is the circumstance, that several of the islands possess their own species of tortoise, mocking-thrush, finches and numerous plants, these species having the same general habits, occupying analogous situations, and obviously filling the same place in the natural economy of this archipelago, that strikes me with wonder….”   ~ Charles Darwin, Voyage of the Beagle

The lowest of the “humid” zones, the Scalesia zone is named for the daisy tree that grows between 970-1970 ft (300 – 600 m) elevations. The Scalesia is one of the few trees in the Aster Family and grows to heights 16 – 50 ft (5-15 m) in height. Its trunk and branches are covered with moss and lichens. This area is humid and has the essence of being in a rainforest.

Scalesia Trees have been greatly reduced in numbers since humans arrived in the islands. With them came pigs and goats, which devour the young plants and feed on older plants. People also introduced the Guava, a plant whose dense growth patterns steals nutrients and eventually makes it impossible for competing plants to survive.

An intermediate zone between the dense Scalesia forest and the Miconia shrubb vegetation, the Brown Zone is an open forest dominated by cat’s law, tournefortia pubescens, and aunistus ellipticus. Trees are heavily draped with epiphytes, mosses, livertorts and ferms, which give this zone a brown appearance during the dry season. However, on the islands with this elevation, this zone has disappeared because of colonization by man.

Above the Scalesia Zone at 1950 – 2300 ft (600-700 m) is the humid zone named for the Miconia shrub that once dominated this region. Miconia Robinsoniana grows to heights of 10-13 ft (3-4 m). The yellow or reddish shading on the edges of its leaves easily identify it.

The Miconia is endemic to the Galápagos, but since the arrival of man it has become the most endangered plant in the islands. Introduced cattle have grazed the Miconia into dangerously low levels.

On islands with elevations over 3000 ft (900 m ) the highest vegetation zone in the Galápagos can occur, the Fern-Sedge Zone or Pampa Zone . The appearance of this zone depends on the amount of moisture it receives. This region contains no true trees or shrubs. The tall Galápagos Tree Fern and Liverworts are commonly found in this zone. 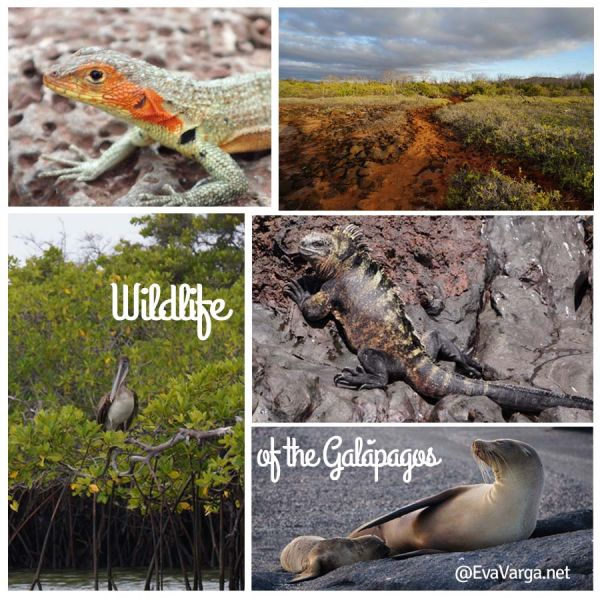 Wildlife of the Galapagos *

* checkmarks indicate the animals we observed

If you would like to further explore the Galápagos from the comfort of your home or if you are planning to visit yourself, my multidisciplinary unit study, Galápagos Across the Curriculum, provides ample opportunity for kids to explore the diversity and remarkable history of the islands through a variety of hands-on science activities and projects.