One of the science labs we did this week provided an opportunity to discover Viscosity.  I started the lesson by asking them if they had ever heard the term before?  I was surprised with Buddy said, “Yeah. I think so.  In Hawai’i I think you talked about it.”  I had completely forgotten this conversation  until he mentioned it.  We had been discussing the speed at which lava flows and I had said that it had a very high viscosity so it was very slow.  The minds of children amaze me.  They remember so much more than we ever give them credit. Anyway …

I wrote the definition down on the white board and asked that they copy it into their journals.  I then showed them the 5 test tubes I had filled with a variety of liquids (tap water, vegetable oil, soap, maple syrup, and ranch dressing) and had allowed to sit on the counter for an hour or so to come to room temperature.  We then carefully dropped a marble into each tube from just above the surface (to minimize any splashing) and timed how quickly it reached the bottom of the tube. 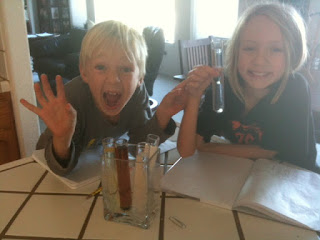 In most cases, it was relatively quick but there was one surprise … you will have to try this experiment out for yourselves to discover what we had not expected.

I allowed time for them to write down their hypothesis and choose one liquid to test … maple syrup, of course.  I thereby filled a sixth test tube with cold syrup from the refrigerator.  The tube with room temperature syrup was placed in a water bath and microwaved it for 30 seconds.  We then repeated the same procedures from before, timing the marble as gravity pulled it through the syrup.

Hot Maple Syrup 1 sec
Room Temperature Syrup  6 sec
Cold Syrup  11 sec
“Heating a liquid decreases it’s viscosity. The marble went through it faster,” explained Sweetie.
This was a great experiment and they kids had a lot of fun with this one.  I’m sure they’ll want to test other liquids in the future … grape juice, milk, coffee … you name it.  Buddy is already asking, “Will heat make all liquids have less viscosity?”
What I loved most about this experiment is that when we went to our curriculum meeting with our ‘Umbrella Facilitator’ … both kids nailed their explanation of viscosity.  They understood it perfectly!