The Weaverville Joss House, a Taoist temple, is the oldest continuously used Chinese temple in California. On display are art objects, pictures, mining tools, and weapons used in the 1854 Tong War. This Taoist temple is still a place of worship and a fascinating look into the role played by Chinese immigrants in early California history. The Joss House was built in 1874 as a replacement for another that had burned. In an effort to preserve this important part of California’s Chinese tradition, the temple became a part of the California State Park System in 1956. Many of the historical objects have been restored and the structure itself stabilized. In addition to the temple equipment, park visitors will see Chinese art objects, pictures, mining tools, and wrought iron weapons used in the 1854 Tong War. 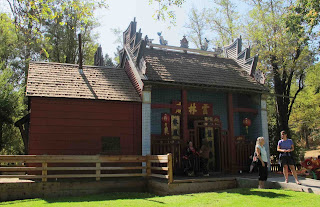 We visited the Joss House for the first time during the annual Moon Festival.  We first explored the exhibits inside the museum and then ventured out into the garden area for a few activities targeted for children.  Sweetie and Buddy most enjoyed the calligraphy … learning a new word and character … 月(Yuè or moon).  The other activity in which they took part was decorating paper lanterns .. both choosing to practice writing a few other characters they knew. 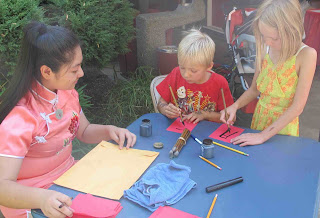 We then walked across the bridge and up to the temple. Unfortunately, we had arrived too late to enjoy the lion dance that took place on the lawn in front of the temple. 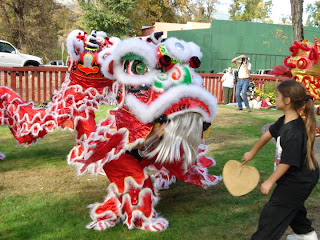 Just beyond the two large doors, the entrance to the temple proper, are two more high wooden doors, “spirit screens” to keep out evil spirits.  According to traditional Chinese belief such spirits can go only in straight lines, not around corners.
Inside, we marveled at the intricate details of the carvings, sculptures and of course the Chinese calligraphy.  We listened to a docent describe how the artifacts were transported from China, first by ship and lastly on foot 80+ miles from Red Bluff.   There are three ornately carved wooden canopies containing images of gods along the back wall opposite the spirit screens and in front of them is an altar holding candles, incense sticks, oracle fortune sticks and an oracle book, wine cups, and pictures of immortals painted on glass.  Before this altar is a small wooden table on which food offerings are placed and a stone urn used to offer alcoholic beverages, usually whiskey. 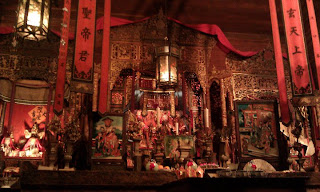 The temple has been in continuous use as a place of worship since its construction.  The family of Moon Lee, whose grandfather contributed toward its building, are know to worship here, along with other Chinese from all over California.  Worshippers visit the temple alone, with their families, or with a small group of close friends to pray and to place some incense, candles and other offerings such as food and paper money before the images of the gods Health, Decision, or Mercy.  The docent explained that the Chinese would bring offerings to the spirits of their ancestors … generally the foods or beverages that their loved one had most enjoyed in life.  Worshippers are forbidden to pray for such things as wealth or revenge on an enemy, and the temple attendant would punish those who made such requests with fines. 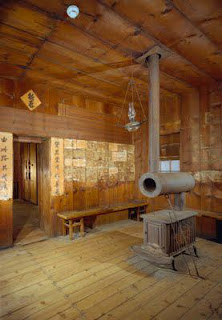 Prior to our departure, we were also able to glimpse the caretaker’s quarters adjacent to the temple room as well as the conference room which sometimes served as a courtroom.  Each were much more demure and lacked the adornments so prevalent in the temple room.
We enjoyed the excursion but were sad that the schedule of activities hadn’t been advertised better.  Sadly, 2011 may be the last year that the Joss House celebrates the annual Moon Festival.  The state has decided to close the doors of the museum and close it to the public.
For more information about The Temple of the Forest Beneath the Clouds and how you can help keep the doors open, visit the Weaverville Joss House Association.