Having spent a few days in Quito years ago on my own, I wanted to introduce this historic city to my family. We thereby arrived in Quito a few days prior to our expedition (which was to meet in Guayaquil on the 17th of October).

Quito, the capital of Ecuador, was founded in the 16th century on the ruins of an Inca city and stands at an altitude of 2,850 m. The capital city derives its name from the Quitus, who inhabited the region a long time before the Spanish conquest.

Despite the 1917 earthquake, the city has the best-preserved, least altered historic centre in Latin America. The monasteries of San Francisco and Santo Domingo, and the Church and Jesuit College of La Compañía, with their rich interiors, are examples of the ‘Baroque school of Quito’, which is a fusion of Spanish, Italian, Moorish, Flemish and indigenous art. 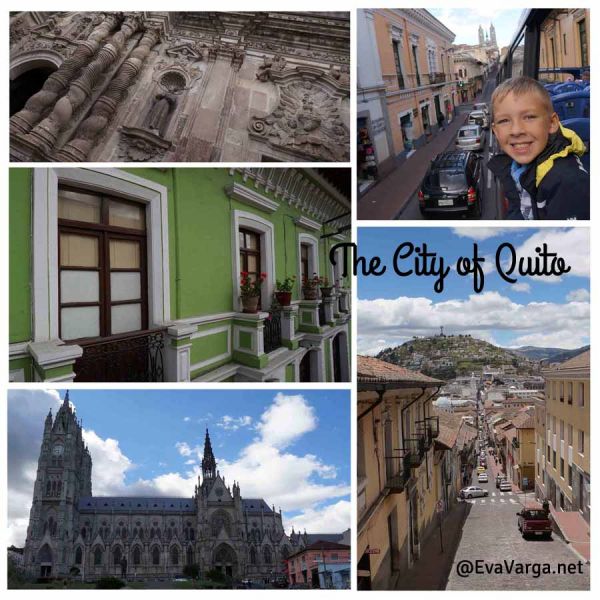 The city occupies a small basin in the great central plateau formed by the volcano Pichincha, the Puengasi ridge, and ridges formed by spurs from the eastern side of Pichincha. The houses of Quito are chiefly built in the old Spanish or Moorish style. The building material in general use is sun-dried brick, covered in the better houses with plaster or stucco.

Upon consulting with the concierge at our hotel, we opted to purchase tickets for the City Bus Tour (hop on hop off). This was a great introduction to the city – enabling us to see some of the famous churches and plazas. We hopped off at only a few places: El Panecillo, La Plaza Grande, y El Teleférico.

El Panecillo is a 200m high hill of volcanic origin with a peak elevation of 3,016m above sea level. The original names used by the aboriginal inhabitants was Yavirac. According to a Jesuit historian, there had been a temple which the indians used to worship the sun; later destroyed by Spanish conquistadores.

In 1976, the Spanish artist Agustín de la Herráan Matorras was commissioned by the religious order of the Oblates to build a 45m tall aluminum monument of a madonna. It is made of 7,000 pieces of aluminum and was inaugurated on 28 Mar 1976 by the 11th Archbishop of Quito. 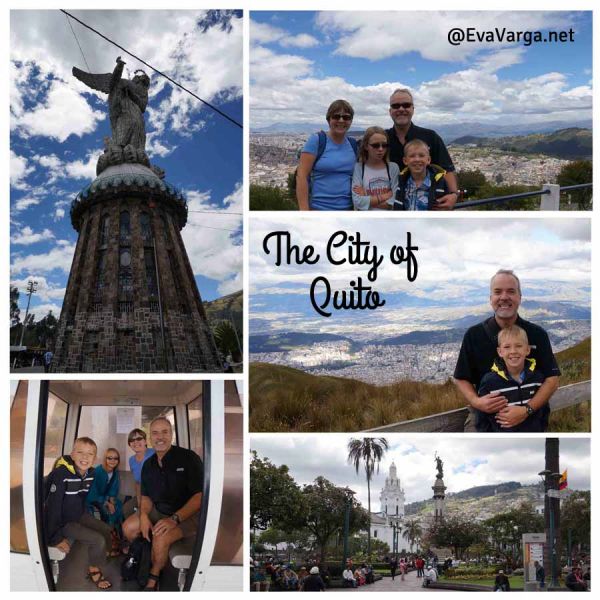 While enjoying the views from the Panecillo, we purchased a cup of sliced mango. The kids were looking forward to a sweet refreshing treat but to their disgust, discovered the fruit had been sprinkled with salt and lemon .. too sour for their taste.

Our next stop was the La Plaza Grande where we visited the Iglesia de la Compañia de Jesus, did a little shopping, and enjoyed a wonderful Ecuadorian meal at Hasta la Vista Señor. Geneva purchased a poncho here and wrapped herself up in it for much of our trip.

In the photo collage above, you can see Geneva wasn’t very happy. She and Jeffrey had been arguing for much of the morning and just before we snapped this family photo, he had stepped on her foot. Ah, the joys of traveling with kids.

Our last stop was the Teleférico – a gondola lift running from the edge of the city center up the east side of Pichincha Volcano to the lookout Cruz Loma.  It is one of the highest aerial lifts in the world, rising form 3117m to 3945m. Geneva and I actually began to feel the effects of the altitude. My heart felt constricted, I was very winded (hard to catch my breath), and we even a little dizzy. Yikes! We thereby opted not to walk any higher – though Patrick and Jeffrey braved forward.

The view was incredible though. It reminded me a little of the viewpoint in Hong Kong – the infrastructure was there, but it had not been maintained. From my research upon our return home, I learned that the aim was to create an entire mall at its base, with cinemas, coffee shops, and an amusement park. Unfortunately this project eventually fell through (though a small cafe, gift shop, and an amusement park – Vulqano Park, still remain).