Though we are in the middle of winter, we’ve been immersed in a study of maple trees. A few weeks ago, I shared a post relaying the science of sugaring. 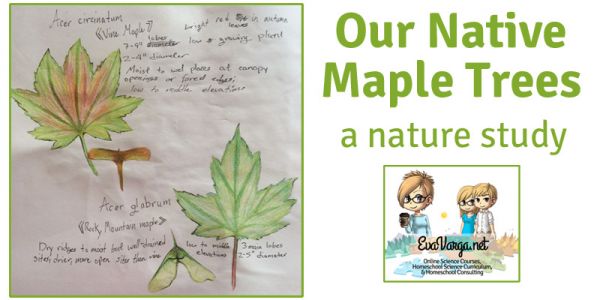 Maple trees are classified in the genus Acer in the Maple family (Aceraceae) and nearly all of the species are deciduous. Three traits that can help you identify a maple tree are:

* Leaves palmate and lobed (for most species),

Acer trees and shrubs are commonly known as maple. There are approximately 128 species, most of which are native to Asia, with a number also appearing in Europe, northern Africa, and North America.

The Sugar Maple (Acer saccharum) is one of America’s best-loved trees. In fact, due to its historical and economical importance (both in the production of maple syrup and as a timber species), more states have claimed it as their state tree than any other single species (New York, West Virginia, Wisconsin, and Vermont).

The simple leaves of Sugar Maple measure from 3 to 5 inches long and are in an opposite arrangement on the twigs. They are usually five-lobed, dark green on the top surface and paler underneath. They are generally smooth on both sides, although the veins underneath may be slightly hairy.

Black Maple (Acer nigrum) is a species of maple closely related to A. saccharum and treated as a subspecies of it by some taxonomists. Identification can be confusing due to the tendency of the two species to form hybrids and to share habit, range, and quality and use of wood. 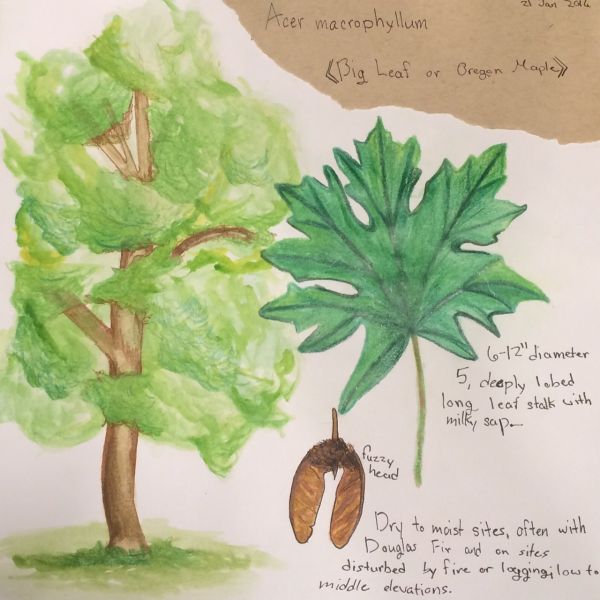 Bigleaf Maple (Acer macrophyllum) is native to the Pacific Northwest and grows in mountainous regions. It is widespread in the Coast Ranges, the Klamath-Siskiyou Mountains, and the foothills of the Cascade Range and the northern Sierra Nevada. It is also commonly known as Oregon Maple for its prevalence in our state.

The deeply lobed leaves are generally 6-12″ in diameter but have been known to exceed this in favorable conditions. The samaras have a fuzzy head, unlike the other species in Oregon.

One of the most beautiful sights in our woods and forests has got to be the native Vine Maple (Acer circinatum). Found as an under story plant to tall evergreens, from southern BC to northern California and east to the Cascades, Vine Maple is a hardy species.

This elegant tree grows quickly to 10-15′ with multiple trunks and spreads to 20′ widths, much like a vine. Brilliant red and orange colors signal the arrival of autumn, while showy white flowers appear in early spring. It features 3-5 lobes and smooth-headed samaras that grow in a “V” shape.

Douglas Maple (sometimes referred to as Rocky Mountain Maple) is native to both sides of the Cascades, from southeastern Alaska to southwestern Alberta and south into New Mexico and California.

Its leaves feature 7-9 lobes, easily distinguishable form its close relative the Vine Maple. Hardier than Vine Maple, this tree is often multi-stemmed, with greenish-yellow flowers, and samaras that are oriented in a “V” shape. 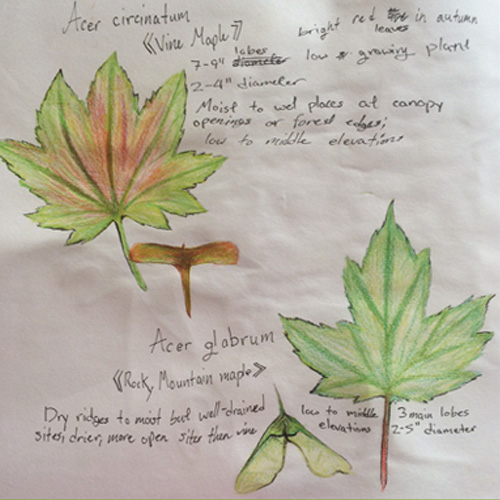 Native to eastern and central North America, Silver Maple (Acer saccharinum) gets its name from the silvery undersides of its leaves. The simple, palmately veined leaves are 3–6″ long and 2–6″ broad, with deep angular notches between the five lobes. With slender leaf stems, a light breeze can produce a striking effect as the downy silver undersides of the leaves are exposed.

The winged seeds or samaras are the largest of any of the native maple. They are produced in great abundance annually, providing many birds and small mammals with food. Silver Maple and its close cousin Red Maple (with which it can hybridize) are the only Acer species which produce their fruit crop in spring instead of fall.

Red Maple (Acer rubrum) is one of the most common and widespread deciduous trees of eastern and central North America. One of the best named of all trees, it features something red in each of the seasons—buds in winter, flowers in spring, leafstalks in summer, and brilliant foliage in autumn.

Produces red (sometimes yellow) clusters of small flowers winter to spring and features medium to dark green leaves 2–6″ in length with 3 lobes and sinuses that are irregularly toothed.

But are Sugar Maples the only trees that can be tapped to produce maple sugar? This is a question that has long intrigued my father. Together, we’ve undertaken an investigation to discover the answer for ourselves.

Join me again in a few weeks as I share with you our own experiences in tapping maple trees on the Oregon coast.