We again enjoyed a delightful buffet for frøkost.  Upon asking for assistance of the receptionist, we proceeded to 7-11 (which are as common as Starbucks) where we purchased tickets for public transportation.  Though we were versed on the New York subway – navigating one in a foreign language added to the difficulty and we had a few moments of stress.

Fortunately, the people were very helpful and everyone speaks English.  With the help of a policeman, we made our way out of T-Centralen subway station to a local tram or trolley.  We made it in short time to our destination – Djurgården, though one stop farther than necessary so we backed tracked on foot. 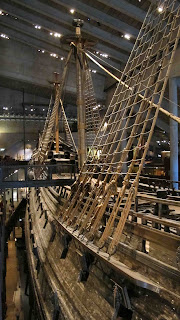 We spent the morning at the Vasa Museum, a glamorous but unseaworthy warship – top-heavy with an extra cannon deck, she sank 20 minutes into her maiden voyage when a breeze caught her sails and blew her over.  After over 300 years at the bottom of Stockholm’s harbor, she rose again from the deep with the help of marine archaeologists.

We were all impressed with the Vasa – particularly in the 500 wooden statues draping the ship and once painted in bright colors.  We wandered through the various exhibits, took a guided tour in English, watched a video (focused on efforts to raise her) and thereafter the kids took part in a couple of crafts fro Barne – painting with a feather and ink (Buddy) and metal stamping (MeiLi).

After the Vasa, we walked back to where we’d originally gotten off the tram for lunch.  We selected a charming, open-air café where we enjoyed a salad and sandwiches.  Just as we were finishing, MeiLi realized that she had forgotten her purse at the Vasa … a habit that is quickly becoming an undesirable holiday tradition (she’s done it twice before).

Upon recovering MeiLi’s purse, we walked across the street to Skansen. Founded in 1891, it is Europe’s original open-air, living history museum.  The park encompasses more than 150 historic buildings (homes, churches, shops and schoolhouses) transplanted from all corners of Sweden.  Another part of the park is a zoo – with an emphasis on Scandinavian animals.

While observing the bears, we almost lost Buddy – giving us quite the scare!  He’d gone one way and us the other … we didn’t realize it until we’d walked some distance.  As he’d been walking in the opposite direction, it took us a good 5-10 minutes to find him.  He was in tears, of course, and as a result made a more concerned effort to hold my hand when it was busy and crowded. 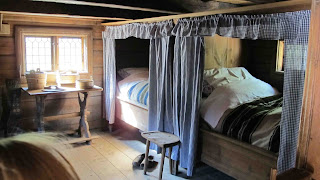 My favorite part of Skansen was the living history.  Unfortunately, as it is still early in the season, many of the buildings were not open and there were few interpreters dressed in period attire.  I was most intrigued, however, by the Oktorp farmhouse.  I’d hoped to interact some with the interpreter (one of only two I saw today) but Buddy twice touched the artifacts and I thereby no longer felt comfortable.

The Sami camp was also fascinating. When we first arrived, there was a crowd of people surrounding the tent or tepee.  No one was really talking but several were laughing uncomfortably after they had peaked inside.  They would then jab one another and encourage their family member or friend to go in as well.  Finally they departed and it was our turn.  When I peaked in, I discovered the reason for their discomfort.  There was an interpreter dressed in Sami clothing inside the tent with a nice warm fire. 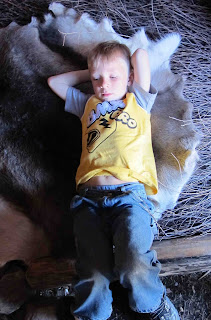 We were invited into the house and unlike the previous crowd, took him up on his kind offer.  We sat upon reindeer hides atop thin sticks that had been piled upon the ground for bedding.  It was surprisingly comfortable.  I very much enjoyed our brief visit.  As nomadic people, the Sami followed the reindeer herds.  They’d build multiple tent like structures throughout the reindeer’s range and live in them temporarily.  He informed us that it takes about 1-2 weeks to build one but that it will last for many years.  Today, Sami people live in modern housing and use the tent only on occasion when tagging reindeer.

I asked DH to take a photo of us – meaning I wanted him to take a picture of the kids and I inside the tent with the ‘Sami man’ as we came to refer to him.  DH took a few pictures and I assumed that all was well.  It wasn’t until I returned home that I realized the Sami man was not in the photos, with the exception of his lower legs.  I was very bummed.  As a former interpreter … I loved the dialogue we had exchanged.  Unfortunately, my memory will have to suffice.