We had allotted 3 hours to explore Chickamauga & Chattanooga National Military Park. When we arrived, we informed the volunteer that we would like the Junior Ranger booklet. She explained to us that the activities were divided in the book for each site and that we could choose which site we wanted to do, however the badges were the same. We opted to stick with Chickamauga as we were already there and as I flipped through, it quickly became apparent that the activities were much more intensive than we had experienced in the past … both in quantity and quality.

I commented on this to the volunteer, stating that I wasn’t sure we would be able to finish before they closed for one of the activities required we complete the driving tour as well. I knew we wouldn’t be able to do the inside activities, go on the driving tour, and return within the 3 hour window but we opted to sit down and give it a try. While we were working, she thankfully gave us a big hint, “Most of the answers to the questions on the driving tour portion can be found in the park brochure. The museum closes at 5:30 but the park is open until sunset. You can earn your badges before we close and do the tour afterwards.” Phew!! 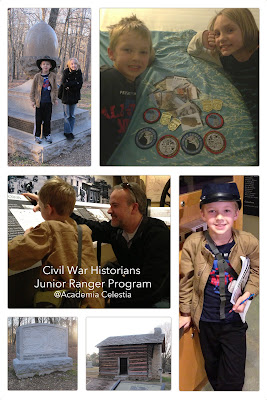 One of the exhibits at Chickamauga in the Fuller gun collection, donated to the park in 1954, featuring 346 military soldier arms.  It was a stunning collection and finding the catalog numbers of six was one of our first tasks. Buddy, like all young boys, was fascinated.  Sweetie loved that the symbol for the battles that took place here was the acorn for the fields were surrounded by Oak woodlands.

While here, we also learned of an opportunity to earn a new patch, the Junior Civil War Historian. It required that one become a Junior Ranger at three distinctly different Civil War parks OR two parks and complete one online activity. We didn’t expect to be able to do this but on the evening of our last day, DH informed us he’d likely get out early. The following day, I printed the online activity book, Discovering the Underground Railroad, and we worked through the activities. We were thereby able to depart early enough so that we could stop at Kennesaw Mountain National Battlefield as well. 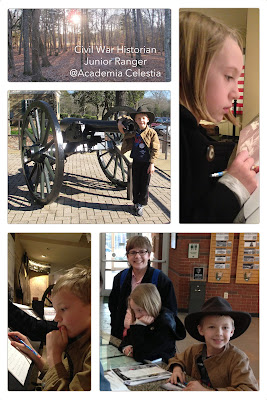 Each of the three activity packets were comprehensive of the role our national parks play in the preservation of our nation’s natural wonders and historical sites. The activity books assured that the kids would look carefully at the exhibits and read the placards and signage for important details. I was very impressed.

While undertaking the required tasks, I quickly became aware of how much the kids have grown academically. Sweetie would move along at her own pace and would come to me with questions when she was stuck. Buddy worked alongside his dad or I most of the time, but would read many of the questions and exhibit signs independently. They worked collaboratively though, dividing up the work for many tasks and sharing their answers. It was a delight to watch them so engaged in their goal of earning the historian patch. They were rightfully proud of their accomplishment.