In public education circles, you may occasionally hear educators debate, “When should students first be exposed to the works of William Shakespeare? Should it be during high school or college years?  Should it be reserved for students in honors classes or on the syllabus for all students?”

The perspectives of most home educators differ significantly, particularly amongst those of us (like myself) who follow a Charlotte Mason perspective.  The nuances of language may be out of the reach of elementary students, but the stories of Shakespeare’s plays are well within their grasp. Although our ultimate goal is for our children to read and enjoy Shakespeare’s original works, why wait until they can before offering them a taste of these classic works? Child-appropriate chunks of the Bard’s works will lay a foundation for reading his original works later. At that time, they can focus their attention on the beautiful turns of phrase and poetic descriptions rather than the complicated plot lines which they already understand. 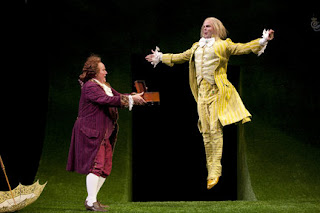 From the time my husband and I first began attending plays at the Oregon Shakespeare Festival in Ashland, I have been looking forward to being able to share in the experience with my children.  Charlotte Mason recommend the whole family study a Shakespeare play. In early 2010, that is just what we did.  Utilizing the season guide which provided a brief synopsis of the plays that were to be performed in 2009-10, I selected a Shakespeare play that I felt would capture the interest of my children … Twelfth Night.

I then interspersed a variety of lessons throughout the school year to introduce my kiddos to Shakespeare and the selected play.  Fortunately, we discovered early in 2010, that the Oregon Shakespeare Festival offers Family Days for many of the plays it performs.  Tickets for Family Day performances are only $15, and include a pre-show introduction to the play (limited number of pre-show tickets which were unfortunately all spoken for when I purchased our tickets). 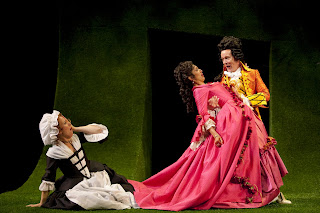 We arrived early to take part in the Green Show in advance to the doors opening.  The kiddos enjoyed watching the Ballet Folklórico Sol Azteca, a Northern Oregon dance group present traditional dances from Mexico.  Shortly after the dancers concluded, we entered the Elizabethan Theater.  The volunteer usher who took our tickets immediately looked upon Buddy and inquired about his age.  I have to admit that I fibbed … “He is 6,” I stated matter-of-factly.  The little guy without any prompting whatsoever, looked up and retorted, “No.  I’m 7!”  “Not yet…” was my reply.  The usher then pointed us in the direction of our door. 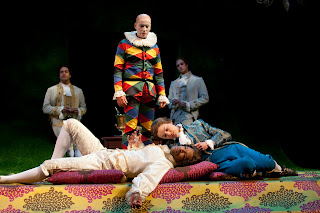 David Zinn’s fanciful stage design, which features a turf-covered center-stage riser that swoops sharply upward into a high wall at the back, as if it were meant for skateboard stunts even as it evokes the manicured lawns of noble estates.  There’s also a large opening in this grassy edifice, through which the players can enter and exit; and when a panel near the top of the wall pops open like a window, the whole thing looks a bit like a giant laughing face.

Directed by Darko Tresnjak, this is a bright, light, very funny production that features Brooke Parks as a charming Viola and surrounds her with several vibrant comic performances by Michael J. Hume and Robin Goodrin Nordli.

The kiddos though a little wiggly, to be honest, were very well behaved.  They asked several questions, “Why didn’t they show the ship?” “How did they do that?” “When is the sword fight?”  but were conscious to whisper discretely.  Buddy started to get a little sleepy and was about to fall asleep in my arms when we broke for intermission.  It wasn’t long after we resumed that he did in fact close his eyes.  Our seats, fortunately, were in the first row of the balcony, so there was ample space at our feet.  He curled up in our jackets and slept peacefully.

On the drive back to the motel … he said that he was disappointed that they didn’t show the shipwreck.  We talked about how difficult this would be to show on stage.  He also stated that he wished there was more fighting. To further spark his interest, I assured him that the next play we attended would.  MeiLi loved every  minute. When I asked if she had any difficulty understanding the words, she insisted that she did not.

The 2010-11 season will bring to life Julius Ceasar (among others). As we’ve studied Ancient Rome in history … we most definitely will plan to see this one.