Beijing, capital of China, was founded by Kublai Khan in 13th century. The Ming Emperors built the lavish Imperial Palace (Forbidden City) and Temple of Heaven, and Beijing (sometimes romanized as Peking) remained the capital through the Qing dynasty, until the early 20th century. In 1949, Mao Zedong declared a new era in Chinese history, establishing the People’s Republic of China, a one-party socialist state controlled by the Communist Party.

Today, contrary to what you might expect, Beijing has amazing green parks and lakes, where emperors and empresses once composed poetry amidst nature. Not far from the bustling metropolis, adventurers can explore the Great Wall of China, Ming Dynasty Tombs, The Temple of Heaven, and many more incredible national historical and cultural sites. It is a great city from which to begin our discovery of China. 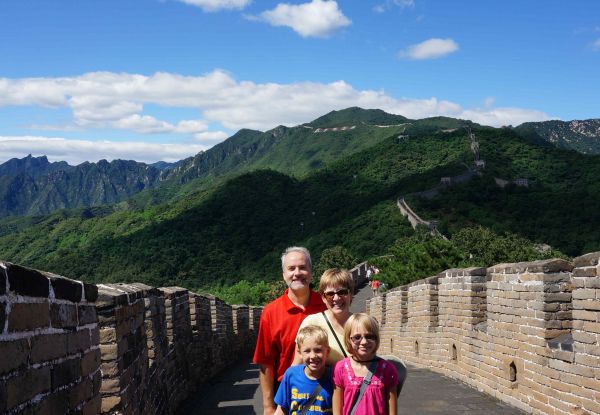 The Great Wall, the longest man-made structure in the world, is one of the new seven wonders of the world, and nothing can prepare you for the sensation of actually looking at the Great Wall as it winds through miles of steep hills and rugged countryside.  Up over mountains, into rivers, across deserts, spanning thousands of miles and different time periods.  Standing on the ramparts, we could easily imagine we were defending China against the Mongol hordes. 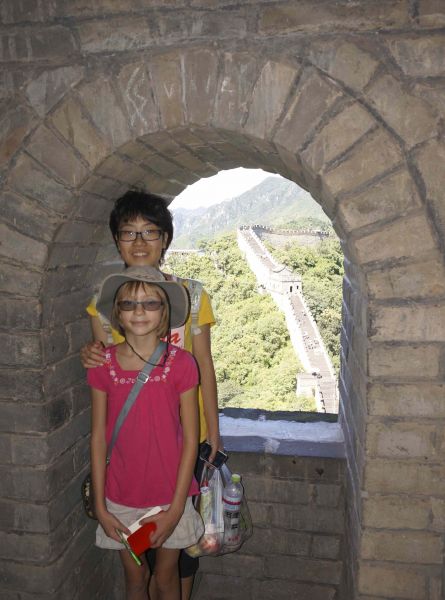 Emperor Qin Shi Huang (Qin Shi Huangdi) constructed the first Great Wall to keep out the nomadic invaders to the north. The wall, a huge earthworks rampart, took 11 years to build, from 221 – 210 BC, and stretched 3,000 miles. During the Han dynasty, the wall was lengthened and more watchtowers were built to add protection for merchants traveling the Silk Road. 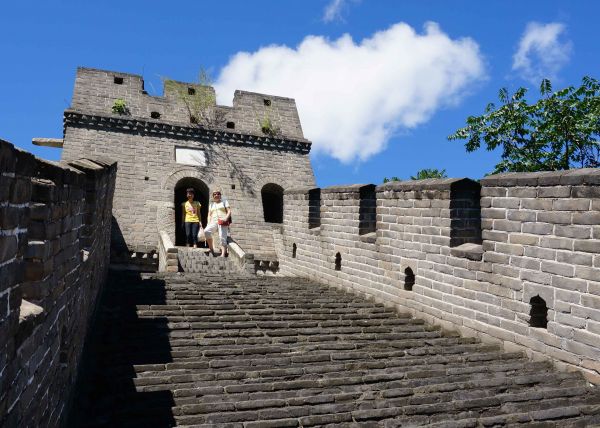 Over the next 1,000 years, the Great Wall crumbled, but the Ming emperor rebuilt the Great Wall bigger and better than ever. Working on the wall from 1368 to 1644, the new and improved Ming wall was thicker, covered in glazed bricks and stone blocks, and lengthened to 4,000 miles, from Jiayuguan in the west, to the sea at Shanhaiguan in eastern China.

The Great Wall is a series of towers, connected by a whopping big double wall, with gates at key locations. Soldiers guarding the wall lived in the watchtowers or forts. Beacon towers were used for communications when invaders were spotted, signal fires were lit (or rockets were launched) all along the wall.  When you visit the Great Wall, you can walk on the wall for miles in any direction, encountering towers as you go – some towers are elaborate multi-story forts, others are just a simple beacon tower. 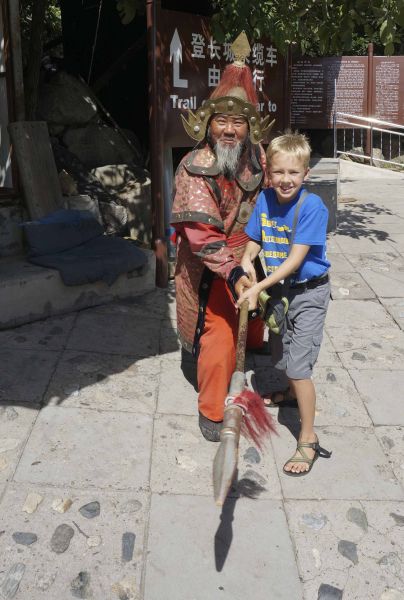 The most popular place to visit the Great Wall is Badaling, but Mutianyu is your best bet with kids. Mutianyu is less crowded, and it has a cable car that takes you to and from the wall.

There is definitely something special about visiting an Olympic site when you clearly remember the Games and the excitement you had when watching them. There is obviously the amazing Bird Nest Stadium, the Water Cube, the place where the flame was lit, the tower. The list goes on. We visited on a weekend when no events were taking place and whilst there were others there, it was by no means busy.  It was very enjoyable to wonder around and soak up that special atmosphere. 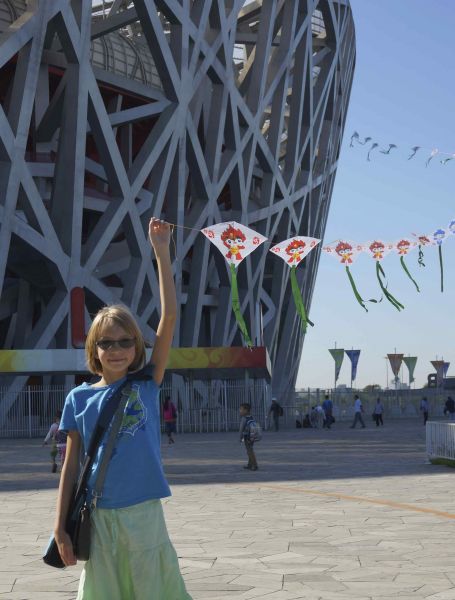 Olympic Park is easy to visit (it’s on the subway) and it is free to walk around and see the outside of the Bird’s Nest and the Water Cube (you do need to go through security and have your bags scanned).  We bought a kite with the Beijing Olympic mascots and enjoyed taking turns flying it while Patrick took photographs of the stadium. 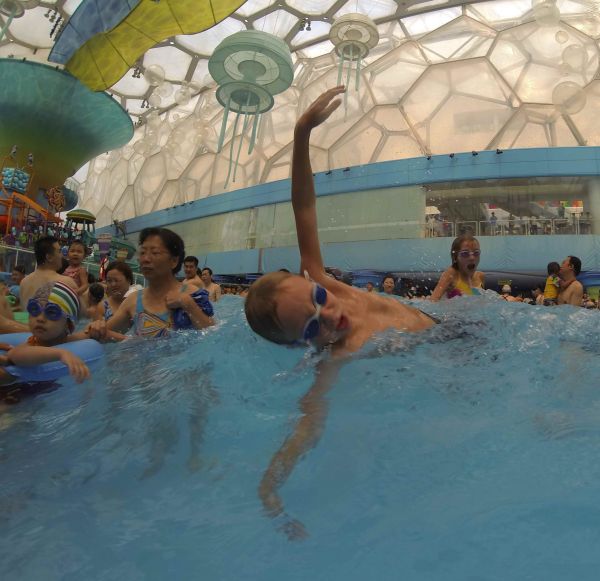 We had the whole day and planned a surprise for the kiddos – they didn’t realize that there was a water park inside the cube – they were delighted to make this discovery. As swimmers, we enjoyed seeing the competition pool aspect of the Water Cube but the whole building seemed to be crumbling and badly maintained on the inside. It appeared as though it was finished hurriedly and they haven’t maintained it well. As such, I would suggest going at night for the lighting (though we did not).  The water park aspect was expensive and I can’t say I wasn’t a little disappointed, but we had a great time nonetheless.

Join me tomorrow for Beijing Part 2 when we visit the Summer Palace, The Temple of Heaven, and try Peking Duck with the family of our exchange student.

This post is part of the iHomeschool Network’s Autumn Hopscotch, a 10 day series of posts by over 40 different homeschool bloggers. You can visit the hopscotch home page at iHN for ideas and inspiration in topics like Family Geography Using Geography Quest, Composer Studies for Young Scholars, and The How To’s of Book Clubs.