Shore Acres, located on the south coast of Oregon near Coos Bay, contains some of the most dramatic geology on the West Coast.  Layers of sediment tilt at steep angles, some are spatter with dark round rock formations like cannon balls, and the surf hitting the rocks shoots spectacular waves 50 feet into the air.  Both my husband and I grew up in Coos County and most of our family still resides in this area.  We thereby get the opportunity to visit frequently. 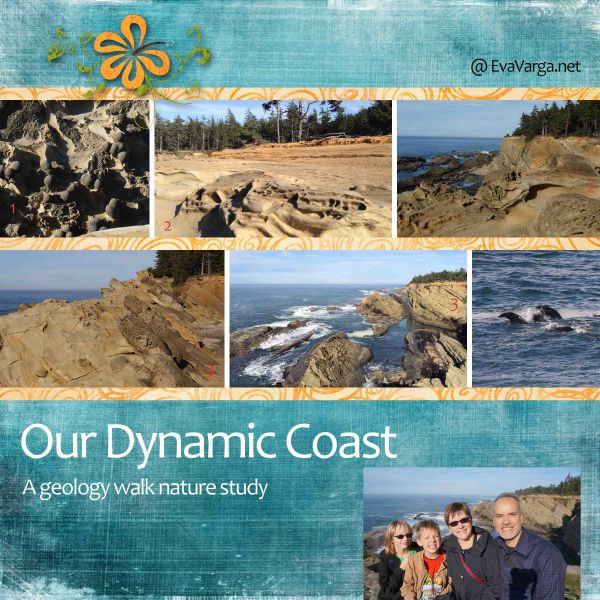 Perched on rugged sandstone cliffs high above the ocean, Shore Acres State Park is an exciting and unexpected combination of beautiful natural and constructed features. Once the grand estate of pioneer timber baron Louis Simpson, Shore Acres features lushly planted gardens with plants and flowers from all over the world. Something is in bloom almost every day of the year. We’ve explored these gardens in the past but our focus this time was the geology.

The rock formations that look like cannon balls are called concretions, compact masses of mineral matter embedded in a host rock.  Concretions usually form before the rest of the sediment has hardened into solid rock. This pre-rock cementing material collects around a nucleus of decaying organic material.

The power of the ocean is wearing away the rock formations day by day, as the waves strike the rocky coastline and explode into the air.  But an even more subtle force of geologic change comes from the evaporation of billions of droplets of seawater, deposited on the rocks and causing salt weathering.

The layers of rock that are part of the Coaledo Formation tilt at a 40-45 degree angle from the Juan de Fuca plate colliding with the North American plate.  The flat surface around you is formed by a wave cut pattern called the Whiskey Run Marine Terrace.

As we drove home, I encouraged the kids to give an oral narration of what they understood from the interpretive signs we had read and the observations we had made.  I hoped that they would also make a few sketches in their nature journal but a las they did not.  Nature journaling is personal.  I try to model it as often as I can but I don’t force it.

During our geology walk, we were delighted to also observe a pod of sea lions surfing the waves and racing one another.  At first, I thought they were dolphins for I had never seen sea lions leap and dive before this day. We watched them for several minutes as they continued their journey south, presumably to a secluded beach not far from where we were standing.